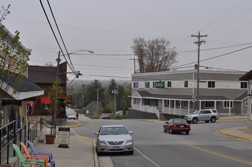 Officials in Sister Bay are considering burying the power lines in the village when Bay Shore Drive is reconstructed in the fall of 2013. One of four proposals calls for burying the lines from the top of the Sister Bay hill at the Country Walk Shops to Scandia Road on the north side of the marina. Photo by Myles Dannhausen Jr.

Is improving village aesthetics worth another substantial municipal investment in Sister Bay?

That’s the question the village board will soon face. Trustees will gauge public opinion at an informational hearing May 22.

Bay Shore Drive (Highway 42) will undergo a complete reconstruction beginning in the fall of 2013. The village is considering burying the power lines through its downtown as part of the project, but doing so could cost as much as $850,000.

Donahue & Associates, an engineering firm based in Sheboygan, brought four proposals for moving or burying the power lines to the village.

Village Administrator Bob Kufrin has been working on the plans for the reconstruction since 2005 and said the cost estimates are “extremely preliminary and may be substantially lower.”

The village will pave the road with cement rather than asphalt because it has a longer life span and, for the moment, costs about the same as asphalt. That means that the road is unlikely to need resurfacing for at least 20 years and won’t be reconstructed for 30 to 50 years.

Village President Denise Bhirdo said burying the power lines was a priority of the street-scaping committee when she first joined the board 17 years ago. Since then the village has spent millions buying land and improving its parks.

“We’ve done all these other things that to not bury the power lines would be a crime at this point,” said Bhirdo, who owns Bhirdo’s gas station across from the marina.

Village Trustee Ken Church owns Sister Bay Auto on the village’s north end. He said he hasn’t yet made up his mind.

“I think it would be great, but it all comes down to the price tag,” he said. “Until I see all the figures I can’t make a decision.”

Bhirdo conceded that the village does not have the money to pay to bury the lines and would have to borrow or raise taxes to do so.

Mitch Larson, who owns On Deck Clothing Company, said the village should take advantage of the opportunity to improve its look.

“You absolutely, positively have to bury the power lines,” Larson said. “You’re not going to get another chance for 50 years and now is the time to do it. I understand that it is hard for those businesses that are already struggling to have to pay for it, but personally, I’m more than willing to pay to get it done. It would be ridiculous not to.”

“I understand that we all pay taxes and it’s tough to have them go up, but this would help us take advantage of the waterfront and maybe help the village sell the school property at the top of the hill if the view is enhanced.”

The village bought Helm’s Four Seasons hotel in 2007 in part because it was a “once in a lifetime” opportunity. That same reasoning nudged along the purchase of Al Johnson’s Butik in 2010.

Bhirdo said she accepts that some residents are questioning when they will reap the rewards of their purchases. She anticipates that many will not want to hear a case for another outlay.

“I understand that argument from a taxpayer and they’re correct to question it,” Bhirdo said. “But we can’t control the national economy. In the long run we have to hope that the sacrifices the taxpayers have made will pay off.”

Bay Shore Drive is slated for reconstruction beginning in the fall of 2013 and winter of 2014. That state portion of the project would begin in the fall of 2014 and continue in the spring of 2015, to be completed by June 1, 2015.

The Bay Shore Drive Reconstruction Informational Hearing will be held May 22 at the Sister Bay Fire Station at 5:30 pm.