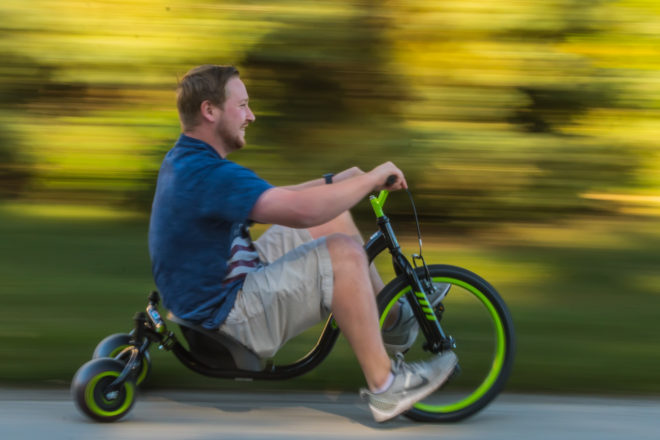 Husby’s server Chris Janisse takes to the back roads of Sister Bay to test out one of the big wheels that will be featured in this weekend’s race. Photo by Len Villano.

Sister Bay’s 2017 Fall Festival is rolling out the big wheels.

The highway that will host hundreds of Fall Festers this weekend will, at 10 am Sunday, be transformed into a racecourse where 16 adult teams, sponsored by SBAA businesses, will face off on big wheel tricycles.

The race begins at the intersection of Highway 42 and Maple Drive, between Husby’s and the Sister Bay Bowl, where two-man “pit crews” will have five feet to push their driver down the hill.

Drivers will set their sights upon a 550-foot slalom-style course (created by traffic cones) that takes them to Mill Street, where they will turn left and continue for an additional 75 to 100 feet until they reach the finish line.

“We will have stacks and stacks of hay at the bottom to buffer, should they have a difficult time maneuvering the curve,” said Louise Howson, SBAA coordinator.

Hay bales will also line the center of the course, offering the fearless riders a bit more safety in this high-speed race. They are also required to wear a helmet, gloves, clothing and close-toed shoes.

“We also suggest that costumes would be very appropriate,” Howson said.

The Adult Big Wheel Race, which Howson is tentatively marketing as an annual event, found instant success among SBAA business members. The 16 teams instantly filled up and over the course of the past few weeks, nine big wheels have rotated among them to allow drivers practice time.

While Howson has recommended to teams an undisclosed location that mimics the grade of Highway 42 where the race will commence, “we have a couple of team sponsors – who will go nameless – who have, under the cloak of darkness, tested the course and managed to maneuver.”

Teams will compete for the coveted Verda Trophy, a bowling trophy once owned by the late Verda Seiler, of Sister Bay. It will be refashioned into an event-appropriate trophy by Verda’s nephew, Fuzzy Sunstrom.

“My aunt was probably the top lady bowler at Sister Bay Bowl for many years,” Sunstrom said. “She bowled in a lot of Green Bay tournaments and other things. Her and my mother bowled couples in Green Bay all the time, so she had whole boxes full of these trophies…I have enough for a few years.”

While spectators will see the race live from the sidewalks of downtown Sister Bay, SBAA has plans to offer two unique perspectives of the race after the fact. A few drivers will be equipped with GoPro cameras to offer a driver’s-eye view of the race, while local photographer Dan Eggert will record a bird’s-eye view with drone coverage. Find these videos online after Fall Fest weekend at cometosisterbay.com.