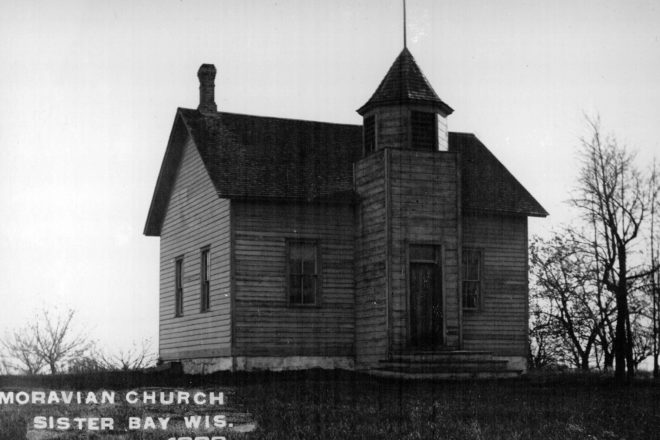 Those 45 Moravians who put together the money in 1896 to purchase a log cabin, formerly owned by a Free Baptist congregation, would be amazed to see the beautiful facility their descendants worship in today.

As they celebrate their 120th anniversary, members of the Sister Bay Moravian Church are proud of continuing the traditions their denomination has always stood for. John Hus, a leader of the reformation movement, founded the church in 1457 in what is now part of the Czech Republic. By the start of Martin Luther’s reformation 60 years later, the Brethren, as the Moravians were then called, already had more than 400 churches with at least 200,000 members.

From the beginning, Moravians have had a zeal for missionary work, education and music. John Amos Comenius, an early bishop who is often called the father of modern education, was at one point invited to become the president of Harvard.

Christian concern for the American Indians brought the Moravian Church to this continent in 1735. Their mission for a group of Mohicans was established in 1740 in Shekomeko, New York, by Moravians from Bethlehem, Penn.

The first Scandinavian Moravian Church in America was founded in Milwaukee in 1847 by a group from Denmark and Norway, with A. M. Iverson, a student at a mission school in Norway, called as their pastor. By 1850, they had moved to Fort Howard (now the west side of Green Bay), and in 1853, Rev. Iverson led his followers to Sturgeon Bay and then on to Eagle (Horseshoe) Island and eventually to the mainland, where they named their settlement Ephraim.

For a number of years, the Ephraim Moravian Church was the only Protestant congregation on the Door Peninsula. In 1893, one of Iverson’s successors, the Rev. Andrew Petterson, wrote in his annual report that Sister Bay, one of his preaching locations, had “good prospects.” He probably had no idea just how good those prospects were. 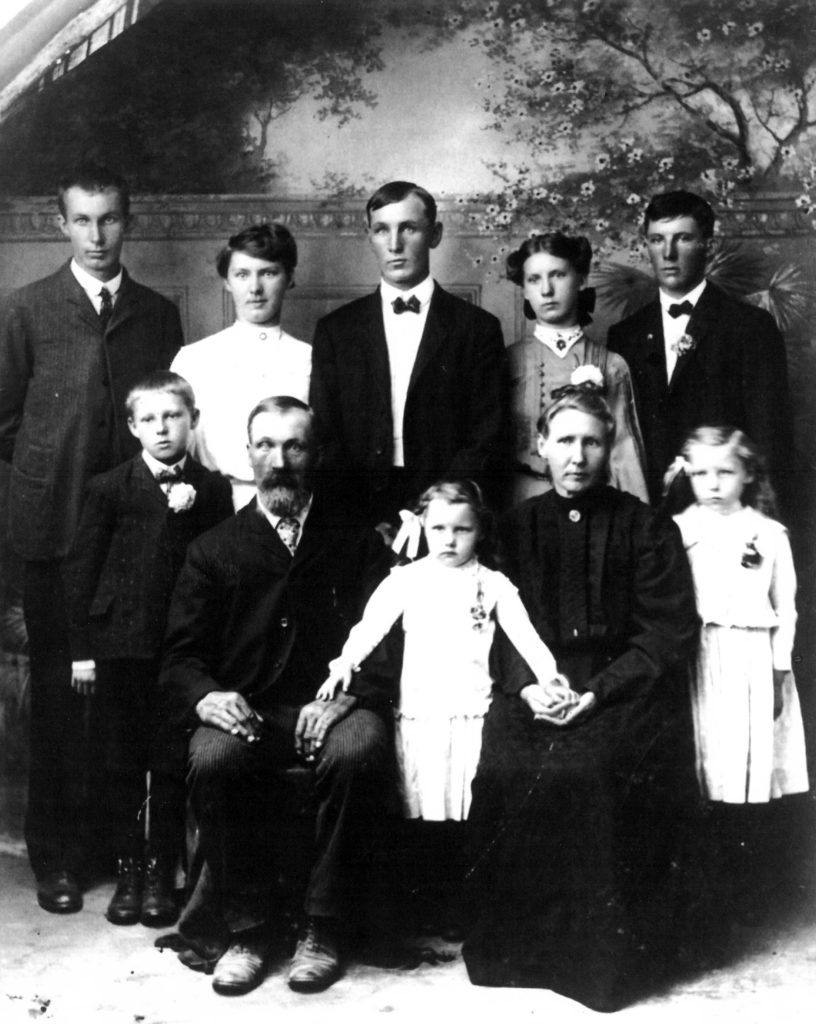 Among the first members of the Sister Bay Moravian Church were Isaac and Hannah Nelson and their eight children: (front row) Arnold, Elda and Grace; (back row) Eddie, Isabel, Sam, Delia and Joe. Their descendants among past and current congregation include 25 members of the Nordeen, Lundquist, Tesnow, Bokelmann, Michelson, Charney, Nelson, Staver, Pritchett, Sunstrom, Seila, Kalms, Koehler, Fandrei, Mann and Shepit families. Submitted.

The old log cabin offered for sale three years later must have been taken as a sign that the time was right for the Sister Bay members of the Ephraim congregation to strike out on their own, and on April 3, 1896, the new church was organized. There were 24 charter members, including Evensens, Knudsens, Bruseths, Hensleys, Johnsons, Carlsons, Jacobsens, Andersens, Petersons, Christiansons and Olsens, along with 21 others who soon transferred from the church in Ephraim. The first Sunday school class had 67 members. At the second annual meeting, the pastor’s annual salary was raised from $60 to $102, and the congregation made its first contribution to foreign mission work.

In 1945, the church called its first full-time pastor, and a parsonage was built. (After the home that had been rented for him proved not to be vacant after all.) Records indicate that the log cabin used as the first church cost about $200 to purchase and repair. And it’s still there in the heart of the present-day church, every addition through the years having been built around it.

In 1951, James Hilander, the first member of the congregation to become a pastor, began his service in Wisconsin Rapids. One of the church’s interim pastors was a bishop, and five others became bishops after their time in Sister Bay.

In 1996, the congregation celebrated its centennial with several former pastors in attendance, music in a tent on the grounds, a potluck dinner and many stories of how the church had impacted members’ lives.

To celebrate their 120th anniversary, there will be special activities throughout the year, rather than one spectacular event. On April 3, the actual 120th anniversary date was marked with a potluck dinner and storytelling. The mortgage for remodeling the parsonage was burned on May 29. 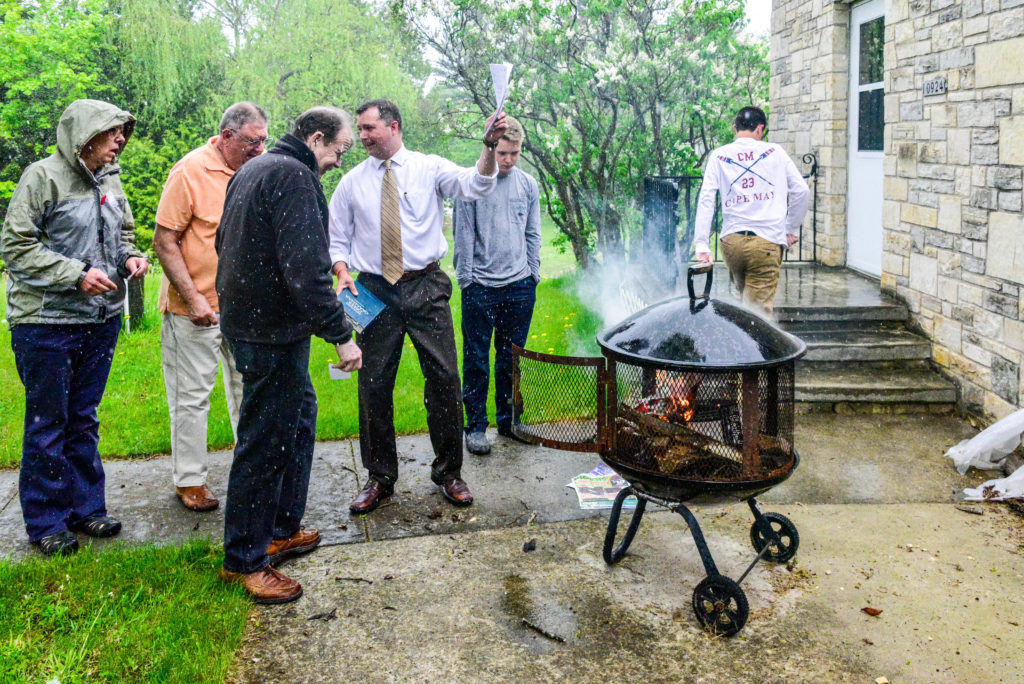 The Moravian Women’s annual Cherry Fest, a tradition since the 1950s, will be held on July 21, and a pig roast in August will continue the yearlong celebration. The annual chicken dinner will be served in October, but not on the regular day, because the Packers will be playing. At Thanksgiving, as usual, the church will distribute 35 baskets containing the ingredients for a special meal. Every member contributes something.

Coffee hour after church, begun in 1977, is still going strong. Pastor Kerry Krauss noted, “People are still sitting here visiting at 12:15 – except, of course, when the Packers are playing!”

The first-Wednesday community lunches are free and open to everyone. Pastor Krauss says he’s noticed that first-timers tend to eat and leave, but after a while, they linger to visit and make friends.

The parish nurse program began in 1990 by Renae Weaknecht, wife of Rev. Bruce Weaknecht (1987-92). For years, the church has held a mission festival and special offerings to help support the Moravian mission in Ahuas, Honduras. In 1972, Greg Sunstrom went there to do carpentry work, and Pastor Krauss hopes that a number of members will make a mission trip there next January to volunteer at the medical clinic.

The Moravians’ love for music is reflected in the church choir, formed in 1930, and the hand bell choir, started a number of years ago by Diane Ludwigsen. Each “memory” bell has the name of the donor and honoree engraved on the handle.

Pastor Krauss says the congregation is a perfect blend of people who have always lived in Door County, those who have retired here and “summer regulars.” One couple from Minnesota, he says, “stumbled in here 40 years ago during a one-week vacation and have attended every year since on the Sunday of their vacation week. We embrace new people and their ideas.”

While the congregation treasures their history – pews from long ago were fitted with new pads for the most recent remodeling of the sanctuary in 2001; the cross that hangs behind the pulpit was made from an old church beam by Joel Thomas; the pulpit, communion table and communion chairs still in use were made generations ago by Matt Evenson; and the stained glass windows were given in honor of early member Isaac Nelson by his widow, Hannah. But the church is also open to new ideas. Sunday school for the dozen young people is now better attended since the time was moved to 4 pm on Wednesdays, when the school bus drops them off.

The Moravian Women have been involved in a myriad of activities to benefit the church and far beyond since their founding in 1896 as the Ladies’ Aid. The Men’s Fellowship was reestablished in 1991, with dinners, programs, sports activities and two fundraisers a year to benefit church projects, mission programs and local needs.

The years have not all been easy. In 1912, a devastating hailstorm caused financial calamity, the influenza epidemic in 1918-19 hit many families, as did wars and the Great Depression. But those tragedies were overcome, and members are quick to recall happy and humorous memories:

When the Rev. Gerry Harris (1978-80) arrived in January, the moving van got stuck in the driveway. He always told people that it was April before he knew there was a sidewalk. He also recalled visiting a family whose son said he didn’t attend church because he didn’t have a red tie. Gerry went back later and gave the young man his own red tie. “He never made it to church,” the pastor said, “nor did he return the tie.”

And church members still laugh bout the long-ago organist who was never on time. When she failed to appear at the Easter sunrise service one year, Pastor Warren Sautebin (1945-49) looked at his watch, looked at the door and finally went to the phone and called the tardy woman, saying, “The Lord has risen, and so should you!”

Sister Bay Moravian’s first pastor, the Rev. John Greenfield, served from 1896 to 1902. Rev. Krauss, pastor number 25, was called to the church in 2010. He is proud to point out that Moravians are in full communion with the ELCA, Presbyterians USA and the Episcopal and Methodist denominations.

“Part of our Moravian heritage,” he says, “is understanding we are part of something bigger than ourselves. It’s part of what our congregation has always been and will always be – not a sense of community, but a sense for the community. Our motto is: In essentials unity; in non-essentials liberty; in all things love.”

As they celebrate 120 years, the congregation is already thinking about what they’ll have to celebrate in 2021!