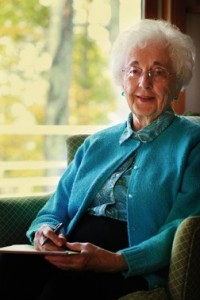 “In 1991 a group of Door County poets invited Appleton poets to come up for a Poets’ Weekend,” recalled Barbara Larsen, the county’s current poet laureate. Along with Larsen, the host poets included Lauren Mittermann, Neil McCarty, and Agnes Kubicz. Among the invited poets was Ellen Kort, the future Poet Laureate of Wisconsin.

And so the Door County Poets’ Retreat was born.

This year the conference will be held at Bjorklunden in Baileys Harbor on the weekend of March 23 – 25 with poet and author Susan O’Leary of Madison as the facilitator. Estella Lauter, organizer of this year’s event, announced that the theme will be “Small Moments.”

“Most narration, many poems, and successful essays are built from individual or linked small moments – an event that unfolds in a small moment in time,” explained O’Leary, who has previously taught poetry classes at The Clearing in Ellison Bay.

Participants will practice writing about these small moments using exercises drawn from life, from texts, and from the landscape of Bjorklunden.

During the first three years the workshops were held in the homes of Larsen and Mittermann, but Larsen said, “it was the consensus of the group that a larger venue would be better.” Mittermann and McCarty investigated having St. Joseph’s Retreat Center on Kangaroo Lake host the event, and Sister Mary Anne agreed to the idea.

After many years at St. Joe’s, organizational changes necessitated relocating the retreat in 2008 to the conference facilities at Bjorklunden.

Local poets who are members of the Wallace Group of writers have taken turns organizing the event: Larsen, June Nirschl, Judy Roy, and Dr. Joan Traver.

“June and I were in charge for the last years it was held at St. Joseph’s,” Roy recalled. “Frankly, putting it on was an easy job! I think the best part of the experience was the camaraderie, the shared interest in poetry, the genuine interest in each other and in each other’s work. I never saw competitiveness, just mutual encouragement.”

“Over the years some of the same people have gotten together to attend the retreat,” added Larsen. “We’ve gotten to know each other as friends.”

The event primarily draws writers from the Madison, Milwaukee, and Fox Valley areas, although poets travel from other areas as well. “Everyone gets excited by it,” Larsen continued, “and goes home feeling they’ve had a good poetic experience.”

Lauter, this year’s organizer, was one of those poets who had such an experience. “When I retired from UW-Oshkosh and moved to Door County, I had planned to continue writing essays about literature as I had done for the past 30 years,” she said. “I also knew I wanted to write more poetry. I think the decisive moment was my first experience with the Poets’ Retreat at St. Joseph’s.”

Since then she has become an active member of the Wallace Group, has entered contests, and published two chapbooks before realizing “I had effectively changed my priorities for writing.” When she was asked to organize the 2012 retreat, “I didn’t hesitate because I know it will act as yeast in our growing community of poets.”

“It was through the Poet’s Retreat that I found my home in Door County during 2000,” Nirschl, another event organizer, remembered. She had been studying with Mariann Ritzer at the Waukesha County Technical College and from her learned of the retreat on the Door Peninsula and “seized the golden moment. As a poet I have profited from the moderator, poets, and my own attempts to create poetry. It makes for a great weekend in anticipation, performance, and reflection.”

She believes that the continuing work of the retreat and the increasing number of supporting activities in the community foster a greater appreciation of poetry in the area, “reinforcing its claim as a home for the arts.”

The Door County Poet’s Retreat has not only survived but thrived for over 20 years, in part because of the area’s population of poets who take writing seriously, who attend writing groups, who participate in poetry readings, who belong to the Wisconsin Fellowship of Poets, and who publish their own chapbooks.

Enrollment in the retreat is limited to allow the leader to work individually with poets along with presenting group sessions, and while this year the registration is closed, poets may watch for next year’s event to secure a place in what has become a Door County literary tradition.