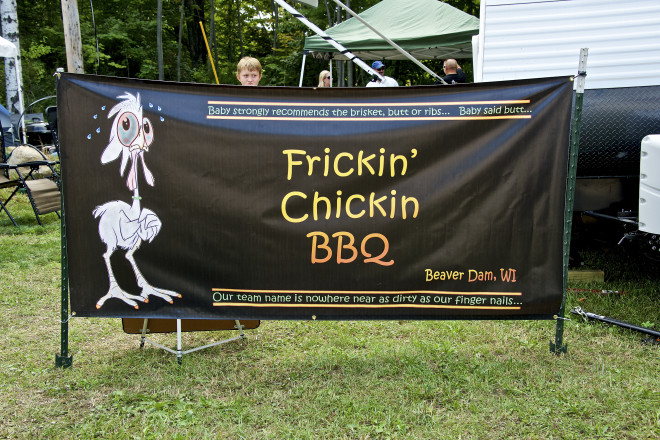 Ask Kansas City or Memphis about barbecue tourism. They’ve known for years there is money to be made in smoked meats. 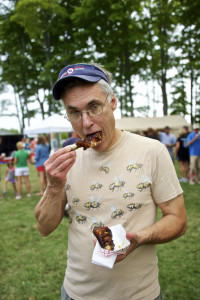 Plenty of other places are establishing themselves as ’cue destinations, such as Alabama, where the state Tourism Department declared 2015 the Year of Barbecue, and Washington Island, where Death’s Door BBQ draws competitive BBQ teams from across the Midwest and beyond, as well as several thousand people who travel to the island for the annual late August barbecue contest.

“We figured we’d get maybe 1,500 people the first year, but we got 3,000. And it’s been growing ever since. We’ve been getting 4,000 to 5,000 ever since,” said Dick Jepsen, co-founder of Death’s Door BBQ, which is one of a growing number of competitive barbecue events held across the country.

While Death’s Door BBQ is only in its fourth year, its genesis goes back to 2003 when Jepsen got the barbecue bug.

“I’ve been a griller most of my life. I got interested in smoking,” Jepsen said. “I went out to Kansas City and took a judging class and became a certified barbecue judge in 2003.”

Jepsen began traveling the country to judge Kansas City Barbecue Society-sanctioned competitions, and in 2010 went through the program to become a Master Judge.

Jepsen had been sharing his barbecue adventures with island residents Fred Hankwitz and Lisa Gibson, “and they got interested and became certified judges,” he said. 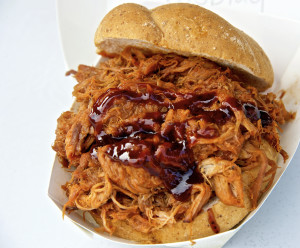 “We were lucky enough the first time that they went for our date,” Jepsen said.

Then the trio of organizers had to follow an experienced event organizer from start to finish at a sanctioned event.

“Fred, Lisa and I went to the Up in Smoke contest in Mason City, Iowa, to learn all the behind the scenes elements of running a contest,” Jepsen said.

The Kansas City Barbecue Society will celebrate its 30th anniversary in 2016.

“I went to my first contest in 1980. That was Memphis in May. I thought it was an absolute hoot,” said KCBS co-founder and Executive Director Carolyn Wells. “I entered my first contest in 1982. At the time, there were no rules. Everybody had their own rules. Once we came into being, we sort of cobbled rules together to set a standard. That has paid off very well.

“I can tell you we’ll do 500 competitions this year,” Wells said. “It’s really growing in Wisconsin. That’s a state that had a real growth spurt.”

Wells said after 9/11, society-sanctioned barbecues began growing at almost double the rate it had in the past. 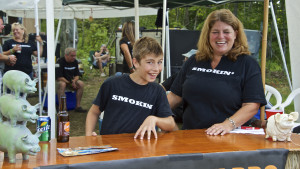 “We were growing at 7, 8, 9, percent a year contest-wise,” she said. “After 9/11, it shot up to 15 percent. I went to a contest the weekend after 9/11 in Decatur, Alabama. It was an epiphany. People wanted to be with other people, see their kids in a playground, drink beer, barbecue and just be together. After that, small- and medium-town America sort of decided barbecue is a very good anchor to promote their community or charity. Ninety-nine percent of the contests we work with are either for civic awareness or charity.”

The next spurt came from reality cooking shows, specifically BBQ Pitmasters, which debuted on TLC in December 2009.

“Barbecue is the hot new old food,” Wells said of what she calls her favorite food group. “It’s had a resurgence and gone to new heights. There are all sorts of cottage industries that have grown out of competition barbecue. People open their own restaurants, they go into catering, the sauces, rubs and marinades, custom cooker manufacturers, competition barbecue classes. It’s been great to see its evolution from dad in the back yard. It’s a fun sport. Anybody can do it. It does require a little stamina. And you get to eat. Barbecue is all about family, fun and friends.”

“The very cool thing is it’s exploding internationally,” Wells continued. “They think it’s a wild and wacky sport. They want to be involved and they want to do it the way we do it. We have 26 international contests this year.” 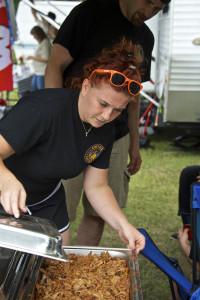 “There are a few things we like about going up to Death’s Door. Obviously the people up there. They feel as much a part of our barbecue family as the people cooking. It’s almost like a homecoming,” said Tom Mackintosh of the T-Mac Smokin’ BBQ Team of Appleton, Wisconsin. “We also have a place in Little Sturgeon Bay, so it is somewhat of a homecoming for us. We have a lot of friends who are aware of the event and make the trip up.”

T-Mac Smokin’ BBQ was the grand champion in the first Death’s Door BBQ in 2012, which earned the team a spot in the prestigious invitational American Royal World Series of Barbecue in Kansas City, where they earned runner-up status from among 563 teams.

“For us it was our very first grand champion ever,” Mackintosh said. “It’s certainly going to be one we will always remember. Those grand championships don’t come easy. We’ve only had three since then. The most recent was also on an island, down in Puerto Rico this past February. Last year we did 19 contests and this year we’ll probably do 20. The year we won Death’s Door, I think we did 12. The addiction ran a little bit deeper after picking up Death’s Door.”

Last year, T-Mac Smokin’ BBQ’s brisket and ribs ranked about 50th in the country, out of about 5,000 teams, and the team ranked about 100 overall.

Mackintosh said his wife Becky is just as passionate about competitive barbecuing as he is.

“What’s especially fun about it, it’s something my wife and I enjoy doing. On weekends, we’re going in the same direction. We don’t have different interests, which I think happens a lot with people when they grow older.” 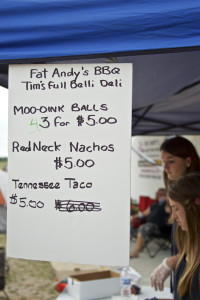 The 2015 Death’s Door BBQ will have a new twist. The event is held at the Washington Island Airport, but for the first time fly-ins will be allowed.

“For the first time it’s going to be open to air traffic,” Jepsen said. “The word will be out that people can fly-in for the day. There will be people here to help land and park the planes. We’re looking forward to that.”

There will also be music all day instead of just for a portion of the day as in the past, this year featuring the Wisconsin Area Music Industry Award-winning Alex Wilson Band.

Jepsen mentioned that the event could not be held without the cooperation of Washington Island Ferry.

“The ferry line is our biggest sponsor. Without their cooperation this would be a no go,” Jepsen said. “The ferry lines will run as long as there are people in line. To get everybody off the island who want to get off, which is really nice. They’ve got four boats running steady.”

“It’s a hustle. We’re moving as fast as we can to keep things moving,” said Hoyt Purinton, president and captain of Washington Island Ferry.

Jepsen also noted that those who want to want to attend the event don’t have to bring their cars to the island.

“There’s a barbecue train for people who don’t want to bring a car,” he said. “Park at Northport, take a ferry and hop on the barbecue train. It’s free and it takes them right to the contest site and back to the ferry.” 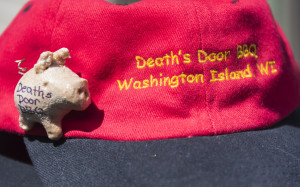 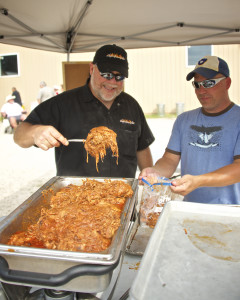