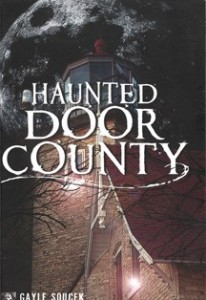 Halloween may be over, but the spookiness of Door County’s off-season has just begun. This time of year, towns and villages are eerily quiet, the sky darkens by mid-afternoon, and Lake Michigan – which entombs dozens of shipwrecks – takes on a pale, mysterious gray. One’s imagination may get the better of them – hearing strange voices in the wind, spotting strange apparitions down a foggy road – or is it imagination?

The author answered a few questions about the book and her personal experience with the paranormal.

Sally Slattery (SS): What was the inspiration behind Haunted Door County?

Gayle Soucek (GS): While I was researching my previous book, Door County Tales, I was fascinated by the abundance of folklore and mystery surrounding so many of Door County’s historical treasures. I visited the Door County Maritime Museum’s “Ghosts!” exhibit, and I was hooked. My publisher, The History Press, had an existing “Haunted America” series, so it was a natural fit. I could hardly wait to get started!

SS: How did you go about discovering and selecting stories to feature in the collection?

GS: Bob Desh at Door County Maritime Museum and A.J. Frank at Door County Trolley each had some tales that inspired me to do further research. After that, I just began talking with local folks. It seemed that everyone I spoke with either had a story, or knew someone who had experienced something odd.

I actually heard many more stories than I could use, so I winnowed the list down to those that had a significant historical context or those that were exceptionally vivid and detailed. In most cases, I also stuck with tales that could be corroborated by more than one “witness.” Although individual experiences are more common and just as interesting, I felt that shared phenomena would have more credibility and perhaps touch a wider audience.

SS: Have you ever had a personal experience with paranormal activity?

GS: Yes, I have. In fact, one of the stories in the book is autobiographical. (Hint: it involved a long-ago childhood road trip with my parents down a deserted Sturgeon Bay road one very dark night.) To this day, I have no explanation for what I saw and heard.

That’s why I don’t judge people who claim to have had paranormal experiences. It’s very clear that something beyond our understanding is going on out there. I don’t know if it’s truly paranormal, or if there is always an underlying purely scientific explanation, but far too many otherwise sane and respectable people have had these encounters for us to simply chalk it up as imagination. Besides, dismissive excuses such as “imagination” and “suggestibility” don’t explain the numerous examples of animals reacting strongly to unseen forces. I prefer to let the reader interpret the stories within their own framework of belief.

SS: Did writing this book change your perception on Door County…and ghosts?

GS: No, not really. If anything, I think it gave me a greater appreciation of Door County’s rich history and respect for the past. Some locales seem to be little more than shallow facades that react quickly to change, never developing a true character of their own. When I drive through towns that feature nothing more than miles upon miles of strip malls and fast food joints, sometimes I feel like it’s all just a flimsy movie set waiting for the next wave of change. DC is flexible yet solid; it changes and grows, but builds on the past – like an archaeological dig. Even the ghosts seem more at home, and not as restless!

SS: You are also the author of Door County Tales. How was this project different?

GS: Door County Tales was sort of my tribute to the peninsula. I spent a lot of time up here as a child, long before I met my husband and turned him into a fan as well. I’ve always loved it, and felt it was a special – almost magical – place. When I began writing historical nonfiction, I convinced the editors at The History Press to let me run with a book that documented the history, while at the same time trying to inject some of the county’s unique personality and vibe. In writing that book, I tried to look at the area through the eyes of the early settlers. I wrote from the past, looking to the future. I wanted to understand what they saw, what they felt, and the obstacles they faced. Here they were in this place of almost indescribable beauty, but they were faced with incredible challenges to survive, much less thrive. And yet it was these very hardships that forged such a strong sense of community and created the area’s distinct identity.

Haunted Door County also describes the history, but it is a little more playful and written from a different perspective. In this book, I am writing from the present day and looking back. In a few cases, the stories don’t have much of a historical precedent, or that precedent is unknown. For example, the UFO encounters aren’t tied to any old legacy, and certainly aren’t unique to Door County, but I’ve tried to give them a Door County feel by describing (to the best of my ability) the surroundings in which they occurred.

Haunted Door County is available from local booksellers and online at http://www.amazon.com and http://www.historypress.net.