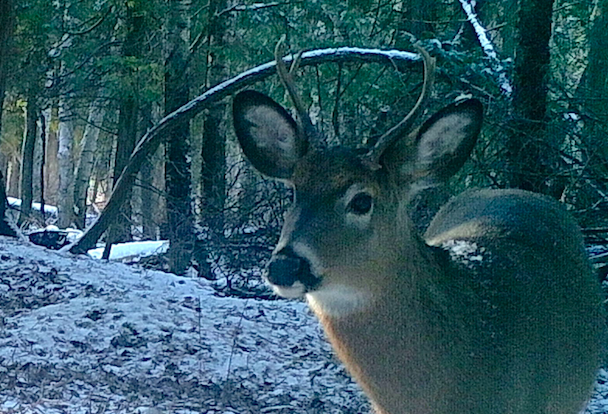 Door and Kewaunee County hunters combined to trim more than 7,000 whitetails from the peninsula’s deer herd this past season, down from recent highs but still above the 10-year average. Trail-cam photo courtesy of Kevin Naze.

Sport-show season is about to kick off, providing an excellent opportunity for those who love the outdoors to stoke their passions indoors for a few hours.

Two shows get underway in the area next week: the All-Canada Show Jan. 16-19 at the Oneida Radisson Conference Center in Ashwaubenon, and the WBAY Boat Show Jan. 17-19 at the KI Convention Center in Green Bay.

It will be the first time downtown for the long-running WBAY Boat Show. Relocation was necessary due to the ongoing construction of a $93 million exposition center across from Lambeau Field in Ashwaubenon. The Brown County Veterans Memorial Arena, ShopKo Hall and Packers Hall of Fame were all demolished last summer in preparation for a new, 120,000-plus-square-foot building. Construction is expected to be completed by January 2021.

The KI Center will also host both the Wisconsin State Hunting Expo and the SCI Hunter Expo Feb. 21-23.

If sightseeing and s’mores are more your style, check out the WBAY RV and Camping Show Jan. 23-26 at the Resch Center in Ashwaubenon.

New for 2020 at the All-Canada Show will be an interactive float-plane simulator. Through the 360 Adventure, you can strap on virtual-reality goggles to take a four-minute simulated flight into a remote Canadian lake. Also new will be the Blizzard of Fish, in which you can step inside a booth to grab as many flying cutouts as you can. The largest total length captured will win a daily prize.

All of the shows are different, but each offers a chance to check out some of the latest equipment, talk to experts and see a variety of displays. It’s also a good time to shoot pictures of quality mounts of fish and game – something that might come in handy if this is the year when you finally get one for the wall.

The Republican-led U.S. Senate recently confirmed the nomination of Aurelia Skipwith as director of the U.S. Fish and Wildlife Service (FWS).

A controversial hire who once worked with Monsanto, Skipwith becomes the first African-American person to serve in that position.

Although she has served as deputy assistant secretary for fish and wildlife and parks at the Department of the Interior since April of 2017, she is the first FWS director without a degree in fisheries or wildlife management since 1964.

Forty-six former Department of Interior employees with a combined 1,075 years of experience spoke out against Skipwith’s confirmation. Dozens of conservation groups were also opposed, citing potential conflicts of interest and industry ties from her work with consulting firms founded or co-founded by her fiancé.

In August of 2018, the FWS made a decision favorable to Monsanto, rescinding a 2014 ban on farms within national wildlife refuges using bee-killing pesticides and the genetically modified crops that can withstand them.

The first 2020 Door County state park candlelight ski, snowshoe and hike is set for Jan. 25, 5-8 pm, at Whitefish Dunes State Park. The Friends of Whitefish Dunes State Park will have hot beverages, snacks and a warming fire in the shelter. State-park admission stickers are required, and pets are not allowed. Because the event is weather dependent, it will be canceled if conditions are poor or unsafe.

Also on Jan. 25, 5-9 pm, you can ski, snowshoe and hike at Point Beach State Forest just south of Kewaunee County. There will be a fire in the lodge, plus food and refreshments available for purchase.

Bow, crossbow and firearm deer hunters combined to harvest more than 7,000 whitetails on the Kewaunee/Door peninsula this past season – the least since 2015, but still well above the 10-year average. The hunts that are still open – limited ag damage tags and Kewaunee County’s extended bow and crossbow season – will add very few to the total.

The latest numbers included more than 750 antlerless deer in the December firearm hunts in Door and Kewaunee counties.

As of Jan. 3, Lake Michigan was 37 inches above its 100-year average, 16 inches higher than last year at this time and two inches above the record January average set in 1987. Water levels were 66 inches above the all-time January low, set seven years ago in 2013.

Wisconsin’s annual free fishing weekend will be Jan. 18-19, with no licenses or stamps needed. All other regulations will apply.