The first sparrows of the season have returned to our front yard, a Field Sparrow, a pair of Chipping Sparrows and a Song Sparrow back from the South to hopefully nest on our property. They will soon be joined by White-throated, White-crowned, Lincoln’s and Clay-colored Sparrows. Of the seven species of sparrows mentioned thus far, all will nest in Door County with the exception of the Lincoln’s and the White-crowned Sparrow. Others that can be found breeding here are the Vesper, Grasshopper, Savannah and Swamp Sparrows. There is another sparrow, the Harris’s, which we occasionally see during migration but doubt that it has ever nested here.

The Fox Sparrow’s cinnamon and gray colors blend well with the ground and dried leaves where it scratches for food.

I think back to the first sparrow-like species I got to know, the House Sparrow, which as kids we called “sputzers.” The experts do not list the House Sparrow with the sparrows but rather with the Weaver Finches. It was the only bird species that my Dad suggested I shoot on our farm with my new Christmas present, a Red Ryder BB-Gun. Frankly, I would much rather have shot at paper targets than at live birds. The House Sparrow, like the European Starling, is a non-native bird and is not protected by law.

The very first sparrow I got to know by its wonderful song was the White-throated Sparrow which literally sang for me every day of the 17 days I camped on Isle Royale National Park in July of 1958. Fortunately they do nest rather sparingly in Door County thereby enabling me to quite vividly recount that wonderful, but too short, period of my life in northern Lake Superior. With enough first-hand experiences I eventually learned that this species is sexually dimorphic, generally meaning that sometimes the male-colored birds are the females and vice versa. So occasionally the female-colored birds will be singing (only the males do the singing).

Along with many other Door County birders, we enjoyed the usual small number of Tree Sparrows that fed on seeds scattered in our front yard throughout this past winter. No sooner did they leave than they were replaced by the Chipping Sparrows. Interestingly, both species sport a rust-colored crown.

It’s usually early April that we begin seeing our first rusty-backed and streaked Fox Sparrows on their way northward to nest. Fortunately they pause briefly for resting and feeding. Quite a few years ago, when Charlotte and I were still living in the Ridges Rangelight, we were hit with a big snowstorm right about the time the Fox Sparrows had arrived, thereby forcing them to remain for more than a week in our yard. What delighted us to no end was their unusually beautiful singing which we had never heard before. 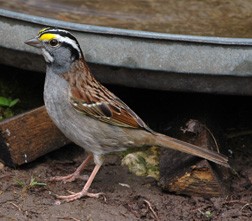 This is the plumage of the typical male White-throated Sparrow.

There is not a single sparrow in our lives that stands apart so clearly from all others in the large family of about 50 native sparrows in the United States and Canada than the Fox Sparrow. I do wish these pugnacious little transients had a name other than sparrow. Unfortunately too many people upon hearing the word sparrow associate the creature with the lowly House Sparrow. The Fox Sparrows are strictly first-class birds. The brilliant cinnamon color of their tail and wings accentuates the activeness of these “dancers in the duff.” Their habit of scratching for food with vigorous backward hops, both feet in motion at the same time, is a reliable sign to look for, much like that of the Rufous-sided Towhee.

Included within our property boundaries is a five-acre field to the west of our home which we keep open primarily for several nesting species of birds. Included are the Eastern Meadowlark, Field Sparrow, Savannah Sparrow and Grasshopper Sparrow. Fortunately the sparrows have very distinctive songs which are easily learned. Even though the sparrows appear to look much the same at a distance, their songs prove to be their badges of identity.

With a little imagination one can quite easily visualize the Savannah Sparrows, in their rather buzzing manner, singing their name – “zit zit zi VAAAN na.” The Grasshopper Sparrow by comparison, perches on a stiff upright weed stalk, throws back his head as though getting ready to sing quite an aria, and all that comes out is “TSLIK!”

It was during my early birding, roughly 60 years ago, that I got to know David and Marion Stocking, English professors at Beloit College and also very skilled birders. They taught for a year in England and told of the very first time they joined a group of early-morning English birders. Marion, not wishing to act like a rank beginner at birding, called out in a loud voice, “There’s an English Sparrow!” One of the Englishmen, standing next to her, more or less disgustingly looking down his nose, blurted out with, “Oh, we just call them House Sparrows in England!”

A White-crowned Sparrow, in breeding plumage, bathes in our front yard bath.

The White-throated Sparrow experience on Isle Royale National Park that is most memorable happened one day during my trekking with two elderly hikers. We had walked quite a while on the trail and the three of us decided to take a breather. We chose a fairly high outcropping of greenstone where we took off our backpacks and let our legs dangle over the edge of the overlook. Suddenly to the front of us came a lovely bird song that none of us knew. Fortunately I was able to imitate it very accurately as to pitch and cadence.

I whistled – the mystery bird answered, I whistled again and immediately the rich-singing bird replied, always moving closer to where we sat. Finally, without warning, the bird flew toward us and landed on the greenstone within an arm’s-length of me. Again I whistled and he answered. It turned out to be a beautifully colored male White-throated Sparrow, and immediately the three of us unanimously decided it was the most beautiful bird we’d ever seen or heard. (See Isle Royale Duet, page 40 in my first book, Once Around the Sun: A Door County Journal.)

Try to learn the wide variety of sparrows that migrate through our county and those that nest here. Become aware of the songs of each species and hold them in higher status than just a lowly sparrow. Let them enrich your lives with their springtime songs.