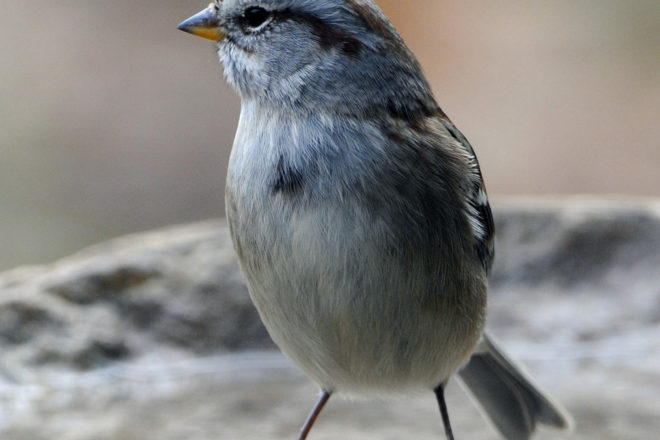 The American tree sparrow, a winter visitor from the far North, can be identified by its yellow lower beak, plain gray breast with black breast spot and gray face with a rusty line extending back from its eye. Photo by Roy Lukes.

The snowstorm of mid-January brought 17 to 18 inches of dry powdery flakes that were easily shoveled away from the feeders. I was not concerned with the seven gray squirrels being able to jump from the piles to the feeders because the snow was so soft and non-supportive.

Then Jan. 22 brought eight hours of rain and by the next morning all was ice-covered. On the morning of Jan. 24 there was one gray squirrel that got up to the east platform and was joyfully eating sunflower seeds inside the cage.

I ran out to chase it away. It didn’t run far and waited until I went back indoors. I watched to determine how it was able to get onto the feeder and saw that it could jump from the now-hardened, ice-covered snowbank next to the platform. Out I went with the shovel and chased it away again and then used a four-tined garden fork and a metal shovel to chop away at the hardened snow and lowered the icy banks so the squirrel could not have a head start to jump to the feeder.

When driving down local country roads this past month I saw many juncos and American tree sparrows fly up from the shoulders. They feed there on weed seeds and also get bits of grit to aid in the digestion of the seeds.

When all the roadsides were totally covered in ice for more than three straight days and most of the fields were the same, wild birds had great trouble finding food. Crows and wild turkeys that forage in cut corn fields had little to eat since most were surrounded with ice.

It is so important to keep bird feeders stocked and to scatter some food on the ground as well. Once it warmed close to the freezing point I went out and scratched up the edge of the driveway to expose gravel for the birds.

When ice storms coat all creation with a layer that birds can’t penetrate, any wild berries are also off limits. In the southern Midwest, ice storms occur more often and can hinder the lives of our eastern bluebirds. In the non-breeding season they subsist on wild fruits. When the fruits are enclosed in ice they cannot eat them. If this happens frequently in a winter many will starve and the number of returning bluebirds may be greatly reduced. 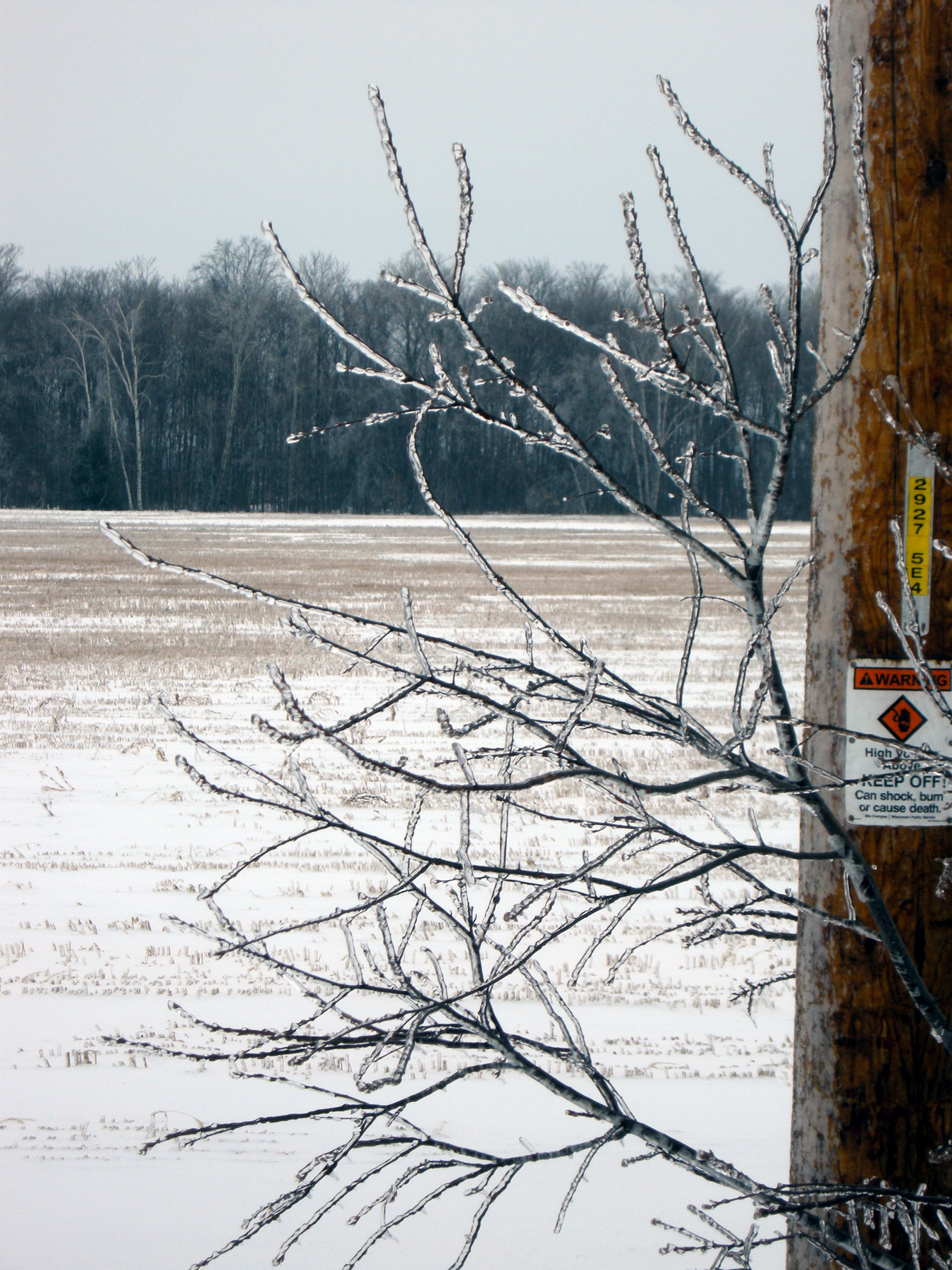 Freezing rain in the middle of winter can turn most plants and trees into icy beauty but will prevent many birds and wildlife from obtaining natural food. Photo by Charlotte Lukes.

One winter visiting bird species I enjoy now in the front yard and feeders is the American tree sparrow. They frequently are the first to hunt for food in the morning and the last to scratch on the ground for cracked corn in the early evening as daylight is fading. Dark-eyed juncos often feed with them. The small flocks of birds that forage along the roadsides and fly up as you drive by are usually made up of juncos and tree sparrows. They are also known to migrate together.

The American tree sparrow is a hardy six-inch bird that has become a favorite at many people’s feeders in winter. They are seed eaters but also enjoy small bits of cracked corn and have even learned how to reach the marvel meal feeder to enjoy the peanut butter-lard mixture.

These sparrows, the sexes being alike, have several easily seen field marks that make identification very simple. Look for a rufous or rusty-brown cap and rusty horizontal line extending back from the eye. The area above its eyes, cheeks and throat are gray.

Frequently there will be a deep brown “stick pin” spot in the middle of its grayish breast. Another excellent feature to watch for is its yellow lower beak, called the mandible. The upper mandible, legs and feet are dark.

Many people living in northeastern Wisconsin are familiar with the chipping sparrow, a very common and quite tame backyard nester. This slightly smaller sparrow does somewhat resemble the American tree sparrow. In fact it is not uncommon for people to report chipping sparrows at their winter feeders when, in reality, they are seeing tree sparrows.

Another feature to compare is the entirely black beak of the chipping sparrow. As has been mentioned, the lower mandible of the tree sparrow is yellow.

Tree sparrows arrive in Wisconsin from their breeding environment in the North around late October. The first one reported in 2017 was seen Oct. 23. Usually a small number of chipping sparrows are still in this area for around one week. Last fall a report of the final date for the chipping sparrow was Oct. 22.

There is more overlap in spring with past reports of the American tree sparrow being seen as late as mid-May, especially on Washington Island, and the first reports of chipping sparrows arriving by early April.

Banding studies have shown that American tree sparrows can live in the wild from five to nine years. Roy used to be a federally licensed bird bander and he learned that between 1955 and 1997, a total of 404,923 tree sparrows were captured, banded and released by various bird banders in North America. Of these, 12,751 tree sparrows had been recovered by being recaptured by banders or having been found dead, perhaps as a window collision or having been hit by a car. That number represents an approximate recovery rate of 3.14 percent.

What hardy birds of weedy fields and hedgerows these little sparrows are, being able to withstand temperatures in 18 degrees below zero before moving southward to a slightly warmer climate. Colder winters can find them as far south as Arkansas, Tennessee and North Carolina.

The tree sparrow’s species name, arborea, referring to trees, is misleading simply because you rarely see this bird spending much, if any, time in trees. Traditionally they are birds of the ground, where their singular magical attraction in their winter habitat is weeds and their copious supply of seeds. They also build their nests on the ground.

An ornithologist by the name of F.E.L. Beal estimated that each year the wintering tree sparrows consumed 875 tons of weed seeds in the state of Iowa alone!

There should be little doubt in your mind that these beautiful little sparrows from the far North are extremely valuable winter visitors.