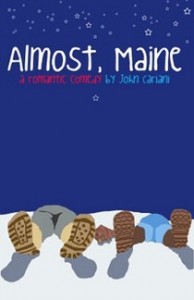 The final performances of Almost, Maine will be held at Third Avenue Playhouse in Sturgeon Bay on March 15 and 16 at 7:30pm. Almost, Maine was the hit comedy of last fall’s inaugural season of the Stage Door Theatre Company with original cast members Amy Ensign, Chad Luberger, Anne St. Henry and Ryan Patrick Shaw.

In the meantime, Stage Door Theatre Company will present an informal series of three staged readings on Sunday afternoons in March, April and May. Readings will be followed by an informal talk back session with the cast and director.

Scheduled for March 24 at 2 pm is a reading of The Trip to Bountiful by Horton Foote. Foote’s tender, heartfelt study focuses on Carrie Watts, who dreams of returning to her childhood home in the small town of Bountiful, Texas, which she left three decades ago.

Admission to the readings is free, although donations are appreciated.