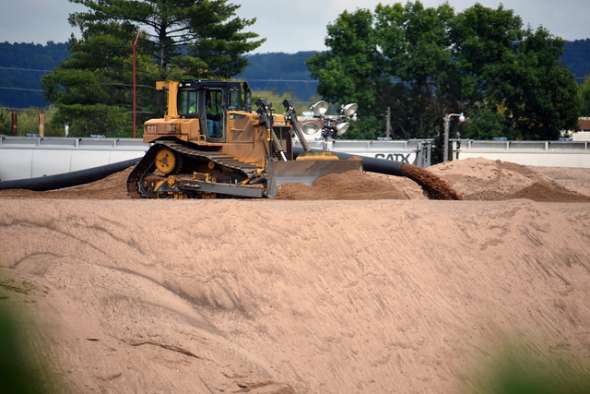 A bulldozer pushes dredged material at the Wabasha Gravel Pit on in Wabasha, Minn. U.S. Army Corps of Engineers photo.

The Great Lakes will see more money to address navigation and dredging projects this year. The U.S. Army Corps of Engineers approved an extra $51.8 million for regional projects. All in all, Great Lakes infrastructure will receive $154.5 million for maintenance and operations this year, said Marie Strum, chief of engineering and technical services with the Detroit District of the U.S. Army Corps of Engineers. “That’s really a phenomenal funding level for the Great Lakes,” Strum said. “We’ll be dredging 31 navigation projects, working on a number of structural repair projects and get a good amount of investment at the Soo Locks. It’s a very high level of funding for the lakes.” Strum said the Great Lakes compete for funding with projects nationwide. But, she noted aging infrastructure is placing a high priority on Great Lakes projects.

In Wisconsin, Milwaukee and Two Rivers are among cities that will receive more money for pier and dock maintenance. Two Rivers will see $500,000 go toward repairing a pier that’s been blocked off from public access. City Manager Greg Buckley said the funding provides a temporary fix. “We’d sure like to see that money parlayed into or invested into a larger project that would involve a permanent fix to that structure because it really takes a pounding on Lake Michigan whether it’s from fall storms or when you see that structure totally encased in ice in the middle of the winter,” Buckley said.

Milwaukee will receive $2.3 million as part of breakwater repairs.

The extra Army Corps funds will also help the agency chip away at its backlog of dredging needs across the Great Lakes.

Residents of Buffalo County are raising concerns about plans to convert local farmland to storage for sand dredged from the Mississippi River.

Every year, the Army Corps of Engineers dredges 270,000 cubic yards of sand from a section of the Mississippi River downstream of Lake Pepin. The dredging keeps the navigation channel open.

Sites for storing this dredged sand are almost full, so the Corps is proposing five new locations in Wisconsin and Minnesota to dump the material.

But many residents of Buffalo County and Wabasha County in Minnesota are up in arms over the proposal, which would convert around 489 acres of farmland to sand storage.

“There are a number of questions that (residents) have that they don’t feel have been adequately answered,” said Douglas Kane, chair of the Buffalo County Board of Supervisors.

Kane said residents are also concerned about the increased traffic caused by selecting locations away from the river.

But Craig Evans, chief of Plan Formulation for the St. Paul, Minnesota, district of the Corps, said the agency doesn’t have a lot of other options.

“We cannot place material in wetlands. And most of the area we’re talking about downstream of Lake Pepin, within the river valley itself, it’s mostly all wetland and its part of the national wildlife refuge,” Evans said. “When you start getting out of the river, this area is bluff country, it rises very steeply and so you either have very steep land or flatland. The flatland has either got buildings on it or its farmland.” The Corps hosted a public information meeting Tuesday, June 6, in Nelson and plans another Thursday, June 15, in Wabasha.

A coalition of groups is asking a federal wildlife agency to take a “hard look” at Wisconsin contests aimed at killing coyotes.

According to PEER, conservation biologists have complained to the group that the Wisconsin Department of Natural Resources isn’t protecting the endangered gray wolf. PEER attorney Adam Carlesco said some wolves are being shot.

“It is easy, for even trained biologists to mistake coyotes for wolves, and in many instances wolves are being killed through a more or less reckless hunting practices of coyotes,” Carlesco said.

Carlesco said the U.S. Fish and Wildlife Service is violating the Endangered Species Act by failing to review coyote killing contests, and by not, he alleges, considering safeguards for wolves.

Two hunting groups in Wisconsin did not respond, or did not want to comment. 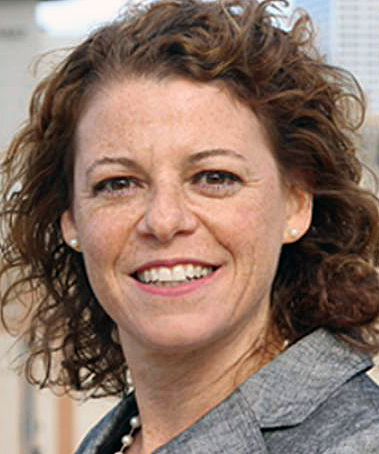 A Milwaukee County Circuit Court judge has entered the race for a Wisconsin Supreme Court seat up for grabs in April 2018.

Judge Rebecca Dallet announced her bid, making her the second candidate to enter the race for the seat held by Justice Michael Gableman. Madison lawyer Tim Burns announced his candidacy last month. Gableman has not yet said if he will seek re-election.

The state Supreme Court is officially nonpartisan, and Dallet said she won’t embrace a party affiliation during the campaign.

“I reject the idea that judges should be placed in a box,” Dallet said. “I think that we are there to be fair and impartial, we are not to pre-judge cases, and we shouldn’t bring that with us to the court.”

Burns has a history of supporting Democrats, and Gableman has been backed by Republicans.

Dallet also said she believes the state Supreme Court should have stronger rules for judicial recusal, a measure the court voted on earlier this year.

Gableman voted with the court’s 5-2 conservative majority to reject a proposal that would have required judges to recuse themselves from cases involving supporters who contributed $10,000 or more to their election campaigns.

“When those same interest groups that spend massive amounts of money can sit in front of justices, there is an appearance that there is bias and there is a lack of public trust,” Dallet said.

Dallet worked as a prosecutor in state and federal court before being elected to the Milwaukee County Circuit Court in 2008. She was re-elected in 2014.

If Gableman announces a bid to retain his seat, the three candidates will face a Feb. 2018 primary.