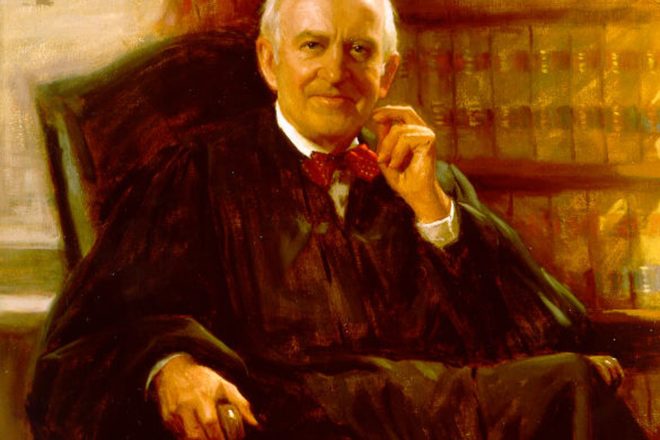 The 1991 portrait by Door County artist James Ingwersen of Justice John Paul Stevens was on display in the Great Hall of the Supreme Court building.

• Justice John Paul Stevens lay in repose in the Great Hall of the Supreme Court building on Monday, with his successor, Justice Elena Kagan, saying that his memory “will be a blessing in this court, which he served so well for so long.” Stevens died July 16 at age 99 after suffering a stroke the day before. He was appointed to the court by President Gerald Ford in 1975 and served until his 2010 retirement during the Obama administration. About an hour after the ceremony ended, President Donald Trump and Melania Trump arrived to pay their respects. They stood in silence with eyes closed at the casket for a few minutes before stopping at the portrait of Justice Stevens painted in 1991 by Door County artist James Ingwersen, which was on an easel in the hall. Justice Stevens had a private funeral and burial at Arlington National Cemetery on Tuesday. He was interred next to his second wife, Maryan Mulholland Stevens, who died in 2015 at age 84.

• While a right-wing legal group had a case before the Wisconsin Supreme Court, Justice Dan Kelly took campaign contributions from members of its board of directors. A review of Kelly’s recently filed campaign-finance report by One Wisconsin Now reveals he received $1,000 contributions from board members of the Wisconsin Institute for Law and Liberty (WILL) in the days immediately preceding and following the controversial decision in the case Koschkee v. Taylor. “It’s arguable whether Dan Kelly should have ever been involved in hearing this case, given his close association with the group that brought it before the court,” said One Wisconsin Now research director Joanna Beilman-Dulin. “But there’s no debate over how outrageous it is that he took thousands of dollars in campaign contributions from members of the group’s board of directors as he was deciding the case in their favor.” In the case Koschkee v. Taylor, Kelly joined with a conservative majority in siding with WILL, which argued the case on behalf of the plaintiffs, in an opinion filed on June 25. The 2019 decision reversed a 2016 ruling of the state high court striking down nearly identical legislation as it applied to the superintendent of public instruction, a statewide elected constitutional officer. In a stinging dissent to the decision of Kelly and his conservative court cohorts, Justice Ann Walsh Bradley wrote, “ … nothing in our Constitution has changed since Coyne was decided. What has changed is the membership of the court. This time around, a new majority of this court does an about-face and now concludes that the substance of Act 57 is constitutional. To reach this conclusion, it throws the doctrine of stare decisis out the window.” Beilman-Dulin noted that before taking the money from WILL board members, Kelly also served on the group’s advisory board for legal strategy in 2016. The head of WILL, who personally argued the Koschkee case before Kelly, also endorsed Kelly’s appointment to the state high court by then-Gov. Scott Walker. Kelly announced in May that he will seek a full 10-year term in next year’s spring election.

COMING UP
• The League of Women Voters of Door County (leagueofwomenvotersdoorcounty.org) will be available to help with voter registration during Sturgeon Bay and Southern Door student registrations. League members will be available to assist during Sturgeon Bay’s student registration on Aug. 8, 12-3 pm; and on Aug. 13, 3-6 pm. League members will also be at Southern Door’s student registration on Aug. 28, 4:30-7:30 pm. Members will help new voters and citizens who have moved or changed their name, and assist with filling out the form and locating the municipal clerk and polling places. A copy of current, legal proof of residence is needed to register. Examples are documents showing a citizen’s current address, such as a pay stub, bank statement or driver’s license with a current address.