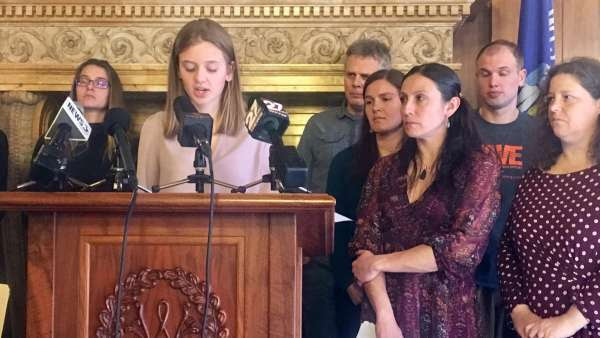 Lydia Hester, a high school sophomore from Madison, spoke against the governor’s school safety proposals on Monday at the state Capitol. Photo by Laurel White/WPR.

Republican lawmakers at the Capitol on Tuesday appeared to move closer to a deal on Gov. Scott Walker’s school safety proposals. The Senate passed the bill 28-4 Tuesday that would fund a $100 million grant program for schools to do things like make safety-related upgrades to buildings and train staff on how to respond to violent incidents.

Some have criticized the plan for not including changes to gun laws, including broadening background check requirements and increasing the minimum age for gun purchases.

In addition to the $100 million grant program, the proposal would create a new Office of School Safety within the state Department of Justice.

The two chambers need to pass identical plans in order for the changes to move to Walker’s desk.

At a Tuesday public hearing about the proposals, some Assembly Democrats raised concerns about the grant program, saying schools should be awarded money for safety improvements without having to apply.

“Why are we making this a process whereby we may have to choose winners and losers,” said Rep. Dave Considine, D-Baraboo. “Why aren’t we just awarding the money to school districts, why aren’t we just giving it to them?”

Carla Pennington-Cross, a mother of two from Glendale, testified against the bills at the hearing.

“I see us creating and encouraging a culture of accusation and not support,” Pennington-Cross said of the plan. “I see us encouraging an increased presence of guns and armed guards in our schools.”

Pennington-Cross also criticized lawmakers for moving so quickly on the bills.

“I think there are so many ways to create safety in our schools,” she said. “We could take time to craft wise legislation. It’s disrespectful to parents and families to rush ahead so quickly.”

A Milwaukee County Circuit Court judge is allowing several environmental groups to challenge a settlement between the state Department of Natural Resources and the Dairy Business Association.

The DBA sued the DNR last summer, claiming the agency did not follow procedure when updating which measures concentrated animal feeding operations, or CAFOs, can use to control runoff.

In October, the DBA and the state reached a settlement in which the DNR agreed to rescind the changes.

But Midwest Environmental Advocates (MEA), Clean Water Action Council, Milwaukee Riverkeeper, Friends of the Central Sands and Wisconsin Wildlife Federation are challenging the settlement. Unlike the DBA, the environmental groups claim the DNR has the authority to strengthen their regulations, and claim the agreement reached between DBA and the DNR doesn’t follow rulemaking procedure because the DNR is loosening rules without allowing public input.

“What happens now is that citizens actually have a chance to have a say and have their day in court,” said Kim Wright, MEA executive director.

The Wisconsin Department of Natural Resources has made a preliminary ruling that air pollution permits for the Foxconn factory in Racine County should be approved, but an environmental group is raising concerns about at least one harmful compound.

“When new emission sources come into an existing non-attainment areas, they are supposed to minimize emission levels along with offsetting what they can’t with the goal of actually improving local air quality,” Drewsen said.

The DNR is arguing the part of inland Racine County where Foxconn would be located is in compliance with the new ozone standard. But the agency says that finding has nothing to do with the Foxconn project.

A public hearing on the Foxconn air pollution permit has been set for Tuesday, April 3 in Sturtevant.

Meanwhile, more concerns have been raised about the transmission line and substation proposed for the Foxconn factory.

American Transmission Company, or ATC, wants to construct an electrical substation and a 1.2-mile transmission line for the Foxconn site. ATC estimates Foxconn will use six times more electricity than the next largest factory in Wisconsin.

But a farm in the path of the transmission line has asked that a draft environmental impact statement by the Public Service Commission of Wisconsin, or PSC, look at the potential effect on the farm.

The PSC is planning technical and public hearings on the Foxconn electricity plan in a couple of months.

The latest Wisconsin Realtors Association report shows home sales in Wisconsin hit a record high between December and February with more than 13,400 homes sold during what are typically slower months for sales.

For the month of February, there was a 5.8 percent increase in home sales compared to the same time last year with a smaller available inventory.