The committee voted 8 to 5, with all Republicans voting for it and all Democrats voting against. The incentives package now moves to the full Assembly. Republicans on the jobs committee lauded the deal, calling it “transformational.”

“This is an investment that makes sense, and we cannot look the other way and let this go by,” said Rep. Bob Kulp, R-Stratford.

Democrats proposed 23 amendments to the deal, including requirements that Foxconn jobs must pay at least $20 an hour and at least 70 percent of the company’s workforce must be Wisconsin residents. All of the Democratic amendments were voted down.

“I don’t have that kind of faith in this proposal,” said Rep. Christine Sinicki, D-Milwaukee. “I don’t understand why you would even want to put the burden on Wisconsin taxpayers to pay for Illinois workers to come into our state.”

A Republican-introduced amendment that included $20 million for worker training was approved by the committee.

The president of the Wisconsin Farmers Union said the state’s farmers could use more help at the state and federal levels when it comes to two controversial issues – concentrated animal feeding operations (CAFOs) and permitting of immigrant farm workers.

The Wisconsin Department of Natural Resources has been accused of both under-regulating and over-regulating CAFOs, farms that have more than 1,000 animals.

Von Ruden said he wishes the U.S. would guarantee at least one-year work visas to immigrant farm workers now, similar to a program Canada has, to give Wisconsin farmers some stability.

A three-year federal grant will help four Wisconsin counties along Lake Michigan that have seen more bluff erosion due to higher water levels. The $840,000 grant from the National Oceanic and Atmospheric Administration will go toward helping shoreline homes, beaches and harbors. 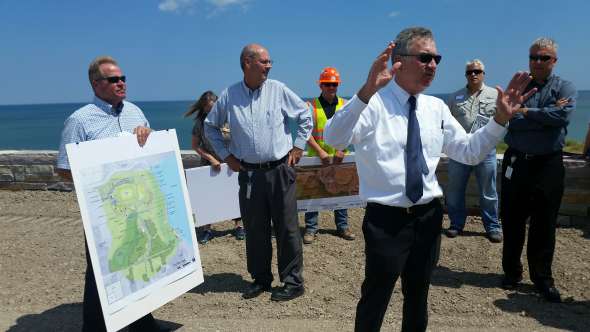 A scenic park along Lake Michigan in Milwaukee County is opening this year, partly due to an agreement with the state of Wisconsin over clean-up of contaminated soil.

Lake Vista Park covers 50 acres of a nearly 300-acre lakefront redevelopment project in the city of Oak Creek. It has a bluff-top view of Lake Michigan, allowing visitors to see for miles.

Arsenic and other chemicals left in the soil by a former DuPont Corp. factory delayed clean-up for many years. But Pam Mylotta, of the Wisconsin Department of Natural Resources, says using a state program that limits future financial liability, DuPont has had the pollutants removed, stabilized or covered with 2 feet of clay soil.

Oak Creek officials hope to have residences and new businesses on other parts of the 300 acres that are away from the former factories. City leaders say one of their biggest challenges is the site is miles away from Interstate-94 and a faster-growing part of Oak Creek.

The lakefront property is just north of Milwaukee County’s Bender Park, and not far from a large WE Energies coal-fired power plant.

UP County Board Votes Against Mine

The Menominee County Board in Michigan has approved a largely symbolic resolution against a proposed mine near the border with northern Wisconsin.

The county in Michigan’s Upper Peninsula could be home to a proposed open pit sulfide mine run by Aquila Resources. It would be near the shores of the river that forms the border between the two states and ultimately empties into Lake Michigan.

The board signed off on the resolution on a 5-4 vote.

County Board Chair Charlie Meintz voted against the resolution. He said it could give people the impression that the board has the power to stop the mine, which it doesn’t.

The Michigan Department of Environmental Quality has ultimate authority on mining. Aquila Resources has secured three of four permits needed to proceed, including those for mining, air quality and pollution discharges. The remaining permit involves wetlands.