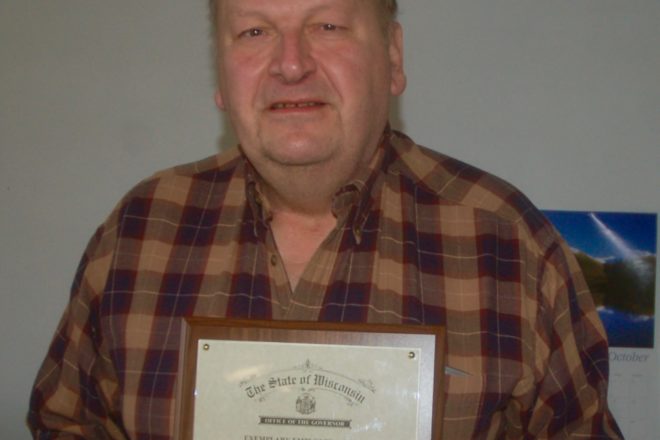 On Oct. 24, Delora Newton, administrator of the Wisconsin Department of Workforce Development’s Division of Vocational Rehabilitation (DVR), delivered an Exemplary Employer Award signed by Governor Tony Evers to the Jungrs, recognizing their business for efforts to hire people with disabilities and create a diverse and inclusive work environment.

The Linen Press has hired multiple DVR job seekers during the past year and earned this award as part of National Disability Employment Awareness Month.

Jim Jungr said it was Cathy who started the 21-year-old business on the path to diversity 10 years ago when she hired a woman with epilepsy. Since then, they have hired other workers with disabilities, but Jim said it is the company’s effort to employ people with criminal records that has gained it some attention.

“It started about seven years ago with a guy who was in jail and was a problem person,” he said. “He was willing to be reformed, if you want to call it that. I gave him a job, and he did a really good job. He did very well. Workforce Development approached me because they heard good things about us. We didn’t take everybody they asked because we didn’t need that many, but it snowballed.”

Jungr said he thinks it has worked to employ what many consider the unemployable because he treats them with respect.

He also acknowledges that not everyone has worked out.

“We did have one [who didn’t work out]. It wasn’t because of work; it was because he violated the parole officer’s instructions,” Jungr said, and added that another employee failed because of a habitual drug problem.

“I just think I’m a pretty mellow personality,” he said. “I think my wife would tell you I run a pretty loose ship. I use more humor and sarcasm than yelling. And I have a loud voice, which I think helps, too. I try to treat them respectfully rather than pound them into the ground and try to use them as cheap labor. We do pay high for the area – I do know that.”