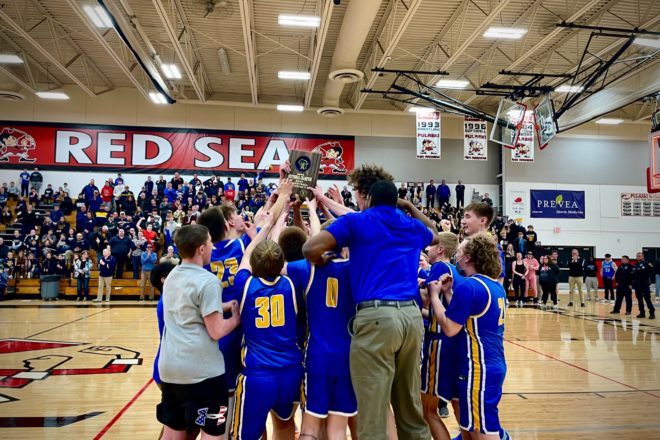 Gibraltar players scramble to get their hands on a trophy no Gibraltar basketball team has held before, a sectional championship that sends them to the state tournament. Photo by Myles Dannhausen Jr.

When Will Friedenfels grabbed a final rebound with 4.8 seconds to play in Gibraltar’s Sectional Final game against Columbus Catholic Saturday night, the dream became reality for the Vikings.

Friedenfels passed to guard Sam Lindenberg, who took three quick dribbles and tossed the ball into the rafters of the Pulaski Fieldhouse before erupting with his teammates and a raucous Gibraltar crowd. The 55-49 victory has the Vikings bound for the state tournament in Madison for the first time.

Gibraltar will play at the Kohl Center Friday. Coach Justin Burress, who announced earlier this season that he’ll be stepping down after the season, will lead the first Door County team to Madison since Southern Door went in 1999.

Saturday’s ending was fitting. Lindenberg has been the Vikings leader all season and earlier in the week was named the Packerland Conference Player of the Year. On this night Friedenfels was the Vikings glue, challenging shots, snatching rebounds, and filling a crucial ball-handling role in the final minutes as Gibraltar battled a tenacious Columbus press.

“It’s an unbelievable feeling,” Lindenberg said after the game, still clutching the sectional championship trophy. He is the leader of a team that started the season 5-8, and 1-7 in conference play.

“We knew we had a lot of talent but we were at a crossroads,” Lindenberg said. “We had to come together as a team.”

With the season hanging in the balance, coach Justin Burress said the team had a bit of a heart-to-heart meeting.

“At midseason the guys had a little conversation together as teammates about accountability, about what else they could do as players,” Burress said. “We talked about the fact that good teams are run by coaches where the players believe in their coaching staff. Championship teams are run by players and the coaches are along for the ride. That was the turning point, when they took over.”

The Vikings went 9-2 down the stretch and pulled their conference record to 8-8, proving that those lofty goals weren’t far-fetched. The Vikings are creating some offseason work for the WIAA’s new tournament seeding algorithm, the one that placed the sectional champions as a 5-seed in the regional.

Gibraltar fell behind 6-0 early as Columbus sophomore Emmitt Konieczny attacked the lane, scoring 8 first-half points. Columbus keyed their defense on stopping Lindenberg, the sharpshooter who averaged 20.9 points per game during the regular season. It was clear the Vikings would need someone else to step up, and they found the answers inside.

“I have confidence in everyone on this team,” Lindenberg. “We can be balanced, I can create. We have other guys that can score too.”

Burress said his star guard can be patient when the situation calls for it.

The Vikings clawed back to take their first lead at 23-22 with 3:29 to play in the first half. They wouldn’t trail again, but Columbus wouldn’t go away either. Jake Schar hit a three-pointer at the first half buzzer to put Gibraltar up 31-26, but Columbus jumped right back in it, ripping of the first 5 points of the second half to tie the game at 31.

Columbus used full-court pressure defense to rattle Gibraltar’s ball-handlers, forcing 11 second-half turnovers. Gibraltar went back to the paint. Ash got a layup, then Friedenfels, then a bucket by Victor Jauregui sandwiched around a single Columbus free throw put the Vikings up 37-32. After Columbus cut the lead to 3, Lindenberg came up with his biggest shot of the night, draining a 3-pointer for a 40-34 lead with 11 minutes to play.

Three-point shooting carried Columbus all season, but their talented guards never got in a rhythm thanks to the inspired play of Gibraltar’s defense. Ash and Friedenfels not only controlled the paint, but extended themselves to challenge shooters beyond the arc, putting their long outstretched hands in the face of shooters all night.

“We asked them to do something tonight they normally don’t have to do – guard guards,” Burress said.

With 5:52 to play Schar came up with a 3-point play the hard way, making a layup and free throw to put the Vikings up 47-41. The senior led Gibraltar with 14 points in the biggest game of his career.

Gibraltar scrapped down the stretch, overcoming turnovers and six consecutive missed free throws to hold on. After each turnover the Vikings came up with a big play – a block, a rebound, a closeout, a steal. In the final five minutes Burress turned to an unlikely source to defeat the Columbus pressure, sticking Fiedenfels at the free throw line to serve as a facilitator and take pressure off his guards.

“Will has grown in confidence throughout the season,” Burress said. “I wanted to put him in a position to be successful. We really wanted to put it in his hands I knew he’d be strong with it. They’re looking to foul and I didn’t want anybody to be getting hit on the wrist and complaining about it.”

Friedenfels played turnover-free and nailed 3 of 4 free throws to give Gibraltar its largest lead of the night at 51-42.

“They really don’t trust me much with ball-handling usually,” a chuckling Friedenfels said after the game. “Sometimes in these high pressure moments I hit my free throws. I don’t know, it worked out.”

But Columbus wouldn’t go away. Gibraltar missed 5 straight free throws as Columbus made a final furious push, pulling to 52-49 with a minute to play. Lindenberg then turned it over in the backcourt, putting the Viking crowd on edge – but only briefly – as he recovered for a crucial blocked shot. Gibraltar regained possession and Carl Burgess knocked down one of two free throws with 47 seconds to play.

Forty-seven seconds of hanging on stood between the Vikings and a trip to Madison. A huge block from Friedenfels, then a steal, then two free throws from Lindenberg.