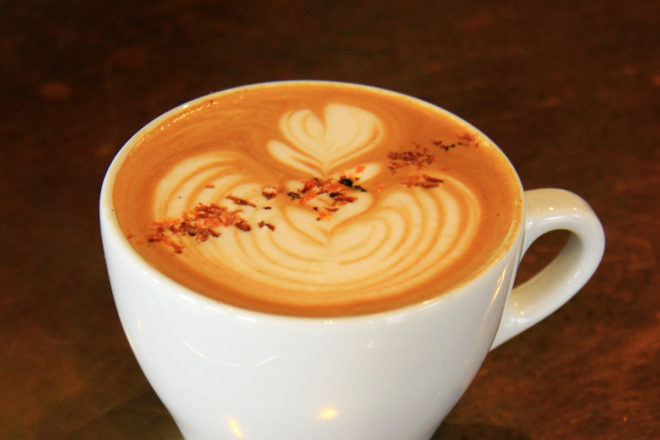 Stephan Witchell – the owner of Sturgeon Bay’s newest coffee shop, Lawlss (with no “e,” but pronounced like “lawless”) – has been in the coffee business for more than 16 years, and as a result, his approach to crafting drinks and developing the Lawlss brand is artfully meticulous. His skills and industry knowledge have led him to produce a very particular aesthetic and approach to sharing his passion for coffee.

“I think being in coffee this long has taught me what I don’t want to do,” Witchell said about what he’s learned from his years of working in the industry, including seven years at Starbucks. “I’m more interested in creating my own space and my own ideas.”

For the past several years, Witchell has been on a path that has allowed him to keep reinventing and applying his creativity – first as a consultant for an Appleton coffee shop and then, in 2016, bringing to life Tempest Coffee Collective, his share in which he sold after two years.

Now he’s found his place in the Sturgeon Bay community with Lawlss, which opened in early summer of 2019 alongside Heist and the Caplan Studios Vault at 108 S. Madison Ave. on Sturgeon Bay’s west side.

Open daily (except Tuesdays), 7 am – 3 pm, the shop has welcomed a variety of customers during the summer, including many visitors looking for that elevated, “third wave” coffee experience found frequently in metropolitan areas around the country. It’s the careful attention to small details – temperature, weight and volume, timing – that sets Witchell’s standards apart. He has a practiced skill set that he’s put to the test in barista competitions, most recently winning a latte art competition at Wisconsin Foodie’s Milwaukee Smörgåsbord event in April.

The drink menu at Lawlss is an example of Witchell’s curated style and approach. It presents options from “the usual” – espresso, americano, cortado – to more proprietary concoctions under headings of Synchronize, Elevate and Decompress that can’t be found elsewhere. A friend recommended one such item, called Dark Matter, with the warning, “It sounds weird, but it’s so good.” The drink, listed in the Elevate portion of the menu, blends orange-blossom honey, espresso, tonic and ice.

Although the busy-season foot traffic helped to introduce Lawlss to many, it’s the year-round residents who have helped to establish enough of a following in Sturgeon Bay to allow for consistent hours throughout the fall and winter. Witchell is currently a team of one, operating in a way to keep growing the business and planning to add an in-house roasting operation eventually. Additionally, he’s planning to offer workshops and classes for baristas and budding latte artists who want to increase their knowledge and expertise.

Witchell has kept the menu consistent since the start – evidence of the amount of thought and planning he’s put into his collection – with the exception of the recently added, fall-inspired latte called the PSL-ish: a browned-butter-sugar-infused latte with fennel, cinnamon, nutmeg and juniper, garnished with torched orange peel. It’s a richer, more complexly flavored version of the oft sugar-laden pumpkin-spice latte, or PSL. The torched orange peel gives off a citrus scent that adds to the heady experience. The PSL-ish is velvety smooth and will prompt you to close your eyes with each sip to savor it more fully.

When I asked Witchell what his go-to drink is, he (perhaps unsurprisingly as a self-described coffee purist) named the cappuccino as his favorite drink. Its ingredients are simple – espresso and steamed milk – but it takes practiced preparation to achieve the perfect texture and pour.

For the espresso preparation, he measures the weight of dry, ground coffee in the basket to 1/10th of a gram as well as the brewing water. He uses tools to help the coffee extract evenly, controlling time and temperature.

“Simply, I have a routine and recipe designed to make espresso taste sweet, fruity, syrupy and creamy,” Witchell said.

In order to not lose those characteristics when the steamed milk is added, he uses a lower temperature.

“Low temperature is important as it doesn’t change the sugar and portions of the milk in such a way that takes away from the goal of tasting the espresso with the sweet, velvety milk,” Witchell said. “Also, it means you can taste [it] immediately – a cappuccino is meant to be enjoyed as soon as it is served.”

Lawlss represents Witchell’s journey thus far in his career. Over the years, he’s made decisions and taken risks that, though perplexing to others, keep him moving forward.

“I’m a restless person,” he admitted after tracing his career changes. But now he’s at a point where he’s confidently embracing his individuality – restless nature and all – and using Lawlss to secure his freedom of creativity.

“A Starbucks manager once told me, ‘Your mind is like a wild stallion; it’s elusive and unbridled,’ and I like that. I think that’s a positive thing.”

The brand introduction on his Facebook page encourages this idea for everyone, stating, “Lawlss is built around the cunning idea that creativity, art and community evolve when we set free the wild heart inside us all. It’s what gets us up and keeps us motivated. Will you set yourself free?”

The logo’s visual element – the head of a black wild stallion – plus the minimalist font and other Lawlss brand elements are all meaningful and encapsulate that idea of playing by your own rules. The absent “e” in the name, too, is a nod to the bold approach. The space – a contrasting mix of historic bank-building details and fresh, modern design – has deep-emerald walls, a copper bar top and white marble surfaces that create a welcoming and intriguing atmosphere.

Not a big coffee fan? I still challenge you to taste one of Witchell’s creations, which just cannot be fairly considered in the same category as conventional coffee. What he creates is leaps and bounds above your run-of-the-mill cup of joe and will keep you going back for more.

Visit Witchell at Lawlss, 108 S. Madison Ave. in Sturgeon Bay, daily (except Tuesdays), 7 am – 3 pm; or order in advance at lawlsscoffee.com for pickup. Look on the website, Instagram (instagram.com/lawlsscoffeedoco) and Facebook page (facebook.com/lawlesscoffeedoco) for updates about fall and winter classes and workshops.