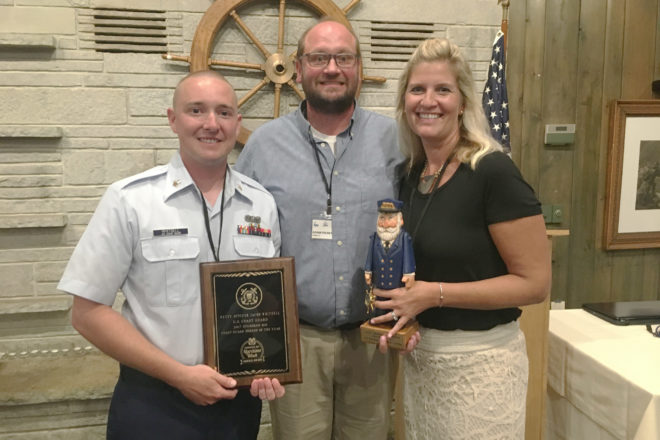 (Left to right) Petty Officer Jacob Whitsell accepted the award of the Coast Guard Person of the Year and Adam and Linnea Pichette accepted the Mariner Award on behalf of Steve Brunstrom, Linnea’s father. Submitted.

Fifteen iconic figures in the rich maritime history of the Door Peninsula and three local Coast Guardsmen were honored at the annual Mariner Awards Dinner held Aug. 7 at the Sturgeon Bay Yacht Club.

A joint effort by the Door County Maritime Museum and Sturgeon Bay Yacht Club, the Mariner Award is presented annually to recognize individuals who have had significant, positive and lasting impact on the Door County maritime community. One living and at least one deceased recipient are honored each year.

The 2017 Mariner Award recognizing a living nominee went to Steve Brunstrom. Brunstrom served for 40 years as a marine surveyor with the American Bureau of Shipping (ABS), including 20 years as the Senior Surveyor after which he progressed to Principal Surveyor at the Bureau’s Great Lakes Office in Sturgeon Bay. Over the years, he has dedicated countless volunteer hours to the Door County Maritime Museum’s Classic and Wooden Boat Festival and served on the museum’s Board of Directors, retiring in 2017.

Posthumous honors went to local maritime legends Minnie Hesh Cochems and Joseph Harris, Jr. Cochems and Harris were added to the impressive Mariner Award plaque that is prominently displayed on the second floor of the Door County Maritime Museum in Sturgeon Bay.

Petty Officer Jacob Whitsell was this year’s Coast Guard Person of the Year. He was the linchpin to mission success behind several challenging buoy salvage operations. Additionally, he was a dedicated leader in the annual “Ghost Ship” event hosted by the Mobile Bay.