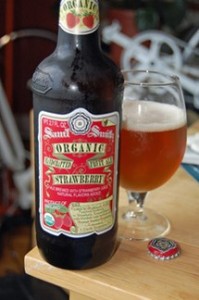 Samuel Smith’s of Tadcaster in Yorkshire, England, makes some tasty beers, but the Organic Strawberry Ale might be one of my very favorite beers in the world.

There is something about the combination of strawberry aroma and effervescent beery strawberry that makes the world OK for the moment. It provides happy sensations. Your brain smiles at the smell. Your palate smiles at the rich, summery taste. It’s heartbreakingly good, so you try to sip slowly and savor each sip, but you can savor for only so long before wanting another sip. And then it’s gone and you grow nostalgic for it. Like life itself. In a sturdy 18.7-ounce bottle.

I did not know this until recently because I have only seen the Strawberry Ale, but Sam’l Smith also makes organic beers in apricot, cherry and raspberry flavors. I must find these other flavors.

One of these days there will be a convergence of beer planets and I will have both Samuel Smith’s Organic Strawberry Ale and Fuller’s London Porter in the house at the same time and in sufficient quantity to try them mixed. I think it would make a nice pairing.

I say I’d need it in sufficient quantity because at the moment, as I look remorsefully at the last third of a snifter of the Strawberry Ale, it is hard to imagine mixing this luscious nectar with anything. But if I had a quantity of it I wouldn’t feel so bad about experimenting. 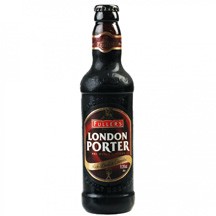 The London Porter is great in its own right. Whenever I drink it I’m reminded of the cozy pubs of Lincolnshire with blazing fireplaces on chilly nights and fresh ale pulled from wooden casks (the Campaign for Real Ale – CAMRA – was gaining foothold when I lived there way back in the last century; it was a group that advocated brewing beer with respect for the traditions of cask-conditioned ales).

Created with brown, crystal and chocolate malts and the English hops variety known as Fuggle (the Willamette hops of Oregon’s Willamette Valley are descended from the Fuggle), London Porter delivers dark chocolate and coffee notes, but mildly. It’s an extremely satisfying English beer from a great London brewery. They make a mighty fine ESB as well (it won it’s first Beer of the Year Award from CAMRA in 1978). Fuller’s London Pride is another great beer.

Well, really, you can’t go wrong with any beer made by Fuller’s or Samuel Smith’s.