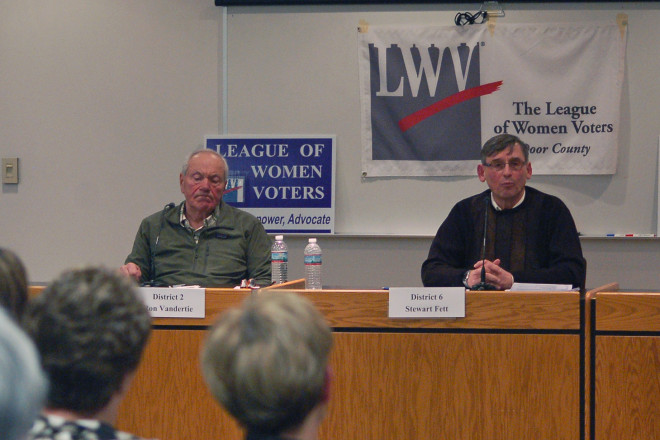 About 40 people showed up in Sturgeon Bay’s Common Council chambers on Feb. 3 to hear four of five candidates in two contested races for the city’s aldermanic seats. The fifth candidate, Tom Benzshawel, had a work emergency that prevented him from attending the candidate forum held by the League of Women Voters of Door County.

The attendees did hear the other four candidates answer 11 questions submitted by the audience. The purpose of the forum is to hear candidates speak on issues that matter to the people they hope to represent, with the idea that there are going to be some very clear differences in responses.

There was an immediate difference between the candidates as soon as you walked into the room. The two incumbents – Ron Vandertie of the 2nd District and Stewart Fett of the 6th District – are older white men who spent most of their lives in the 20th century, while the two challengers – Kelly Avenson in the 2nd District and Nessa Norton in the 6th District – are, as described by Norton, Millennials, 30-somethings who are fully engaged in the 21st century.

Other differences were brought out between all four people in the course of the night, but the most surprising thing was to learn how much all four candidates have in common in their love for their community. All four came across as sincere in their deep affection for this place where they live.

Second District challenger Avenson, who won the draw to open the forum, mentioned several times that her interest in local politics began a mere 15 months ago, when plans were revealed to build a hotel at the foot of the Oregon Street Bridge as part of the Westside redevelopment project. That single issue led her to ask more questions and educate herself about municipal government through research and by talking to city staff and aldermen, to the point, obviously, where she wants to be in on the inner workings of the city and seek the office held by longtime 2nd district Alderman Ron Vandertie.

Vandertie came across as the friendly, avuncular guy next door who sometimes uses the wrong word, but you know what he means. For example, when he said, twice, that Door County is a “tourist destiny,” everyone knew he meant “destination” and didn’t hold it against him.

The league has strict rules for conducting a forum, including limiting the amount of time each candidate has to speak. However, despite declaring at the outset that the forum would go until 8:30 pm or until they ran out of questions, whichever came first, moderator Steven Vickman ploughed ahead with question 11 right at the 8:30 mark.

And, of course, that was the question everyone in the room was waiting for – do you support the Westside redevelopment project, aka do you support “the big dumb hotel”?

“More community input could have been gathered,” she said, adding that when so many people were showing up at meetings, the council should have slowed down and re-evaluated the plan.

Vandertie was next. He reiterated the unequivocal support for the project that he had voiced several times before in other questions.

“There are many positives that are going to come out of it,” he said.

Sixth District Incumbent Fett followed. Throughout the night a confident and earnest Fett referenced the many committees he sits on and chairs, and used his knowledge from those positions to answer certain infrastructure questions more completely than any of the other candidates. Fett, production manager at Bay Shipbuilding, answered the final question with some history, saying that distressed piece of property had been sitting idle in private hands for nearly 10 years before the city decided to buy it.

“Absolutely,” Fett said of his support for the project. “The hotel is only the beginning of what that is going to be.”

Sixth District challenger Norton, a native of Sister Bay who moved from the county and returned two years ago to run a family business, said she had been waiting for this question, and then went on to say she liked an earlier conception of the project that had a four-season market and brewpub.

You can watch the entire forum on Sturgeon Bay Public Access, sbtv.viebit.com.