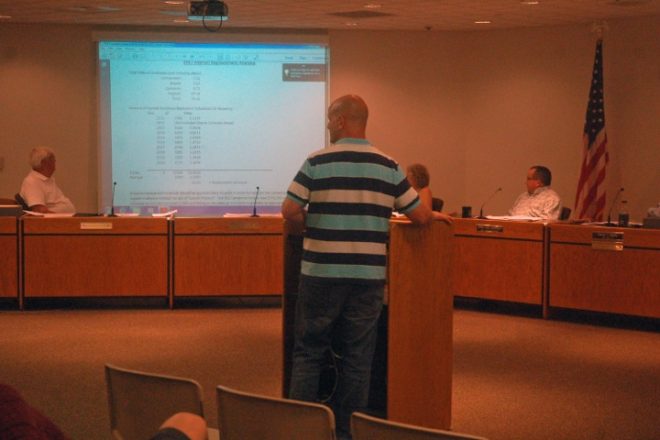 “We’re on an eventual crash course for gravel roads. It’s that simple,” he said in trying to explain how the city’s inadequate road maintenance budgeting has resulted in an unrealistic 50- to 60-year street-life span.

And from resident comments, it seems everyone is well aware of the city’s inadequate road budgeting. As resident John Lodl said in a statement to the committee, “Poor planning on the city’s part doesn’t constitute an emergency on the taxpayer’s part.”

Lodl was among a dozen residents who chimed in on city streets at the meeting, including nine in person and three letters that were submitted by residents who could not attend. Committee Chair David Ward read those letters into the record.

The consensus from residents seemed to be that, yes, there is a problem with deteriorating city streets that reflects badly on the city, and every option should be explored to find a solution.  Suggestions included giving roads a higher priority come budgeting time; instituting a wheel tax on city residents or having the city apply for Premier Resort Area Tax status, thereby allowing a tax to be levied on “tourism-related” items; designating truck routes in the city, since heavy trucks were repeatedly identified as culprits in tearing up some city streets; seek road improvement grants from a variety of sources, and perhaps hire a professional grant writer to do so; institute local property owner rate increases to pay for road repairs; or, as one resident advised, just borrow at the ridiculously low municipal lending rate and get it all done now. 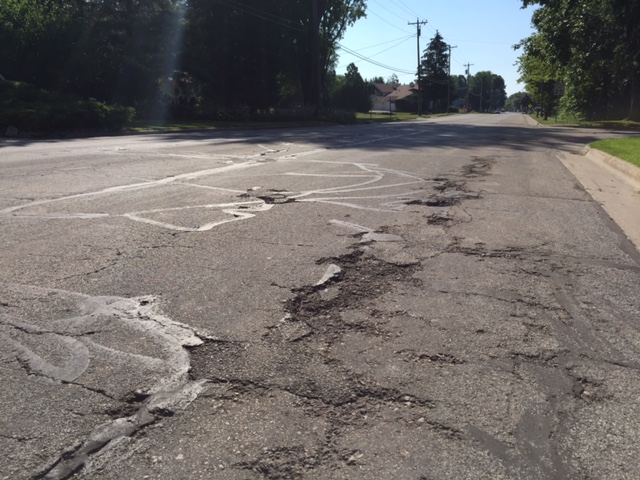 Shefchik said the maintenance budget for the city’s 67 miles of streets has not budged in years, which has severely limited the amount of annual road repair conducted in the city. This has resulted in what he said has been a 50- to 60-year road lifespan in the city.

“Right now, our current spending levels, we’ve been consistently holding it at about 1.2 miles per year,” he said of the city’s annual road repairs. “That generates our 50- to 60-year replacement schedule.”

He implied that getting that far behind on repairs is how road deterioration wins and Sturgeon Bay is reduced to old school gravel roads.

After pointing out that most traditional state and federal road funding sources have either dried up or have become too competitive to count on, Shefchik suggested the city consider increasing the contribution to the annual street maintenance fund, and provided some idea what that would mean to the approximate annual $725,000 road budget.

“If we were to make a modest increase in spending of about $200,000, that would put us at about a 40-year replacement schedule,” he said, adding that it would increase the annual road updates by a half-mile from the current rate of 1.2 miles per year.

He outlined other spending options, but he recommended the committee consider the 30-year option, which would allow for another mile of road work annually, for a total of 2.2 miles a year, at an annual budget increase of $430,000.

“We’d probably be the envy of the country at that point,” he said, referencing the fact that financing road and other infrastructure repairs is a problem for governmental bodies across the country.

“We’re all in the same boat,” he said. “It’s not just Wisconsin, it’s a national thing.”

In recommending the 30-year lifespan, Shefchik said, “If we’re not in that 30-year range, we’re either going to be holding steady or slowly falling backwards.”

He also reminded the committee they can change things if they find problems with 30-year lifespan budget.

“If it’s too much, nobody’s ever going to complain about backing something down,” Shefchik said.

When Ward – the only member of the Sturgeon Bay Common Council serving on this eight-member committee – asked committee members to voice their opinions, Cheryl Chaudoir took issue with Shefchik’s 30-year option and becoming the envy of the country. She said the city didn’t have to have the best roads in the country, so perhaps the 40-year option with a $200,000 increase would be more realistic for hardworking Sturgeon Bay residents.

Chaudoir and James Schneider were the only two members who failed to endorse Shefchik’s 30-year plan. Schneider said he needed more details before he could endorse any funding plan.

Several residents mentioned how the potted, rutted streets of Sturgeon Bay are a danger to both motorcyclists and bicyclists. Ward pointed out that 1,000 bicyclists will be traveling on some of those rough city roads July 15 during the Door County Triathlon.

There seemed to be consensus among the committee and the audience regarding the Wisconsin Department of Revenue’s Premier Resort Area Tax (PRAT), which allows municipalities to charge a local retail sales tax on tourism-related items in order to raise funds for infrastructure costs within the jurisdiction.

One resident, Paul Anschutz, took his three minutes and more to talk about the City of Rhinelander instituting PRAT in January, at a rate of 0.5 percent, and already reaping benefits. Common Councilwoman Laurel Hauser was in the audience and said she talked to the city clerk in Eagle River, where a 0.5 percent PRAT went into effect in 2006. She was told there were some in Eagle River who initially thought the tax would keep tourists away, but 11 years later, everyone is happy and they are able to recoup some infrastructure costs from visitors.

“Tourism is putting wear and tear on the roads,” Hauser said.

With a $20 annual fee on the 12,848 vehicles registered in Sturgeon Bay, $256,000 could be raised annually for infrastructure. But that tax is not paid by the heavy trucks and tourists who also contribute to road deterioration.

Committee member Tony Smith wondered if the wheel tax had to be $20. “Could this be a $3 wheel tax?” he asked.

Ward said the rate is adjustable, so there may be more discussion on that subject.

Before adjourning the meeting, Ward charged the committee with thinking about what level of funding is appropriate, doing research on funding options, and then discussing all of that at the next meeting on July 25. That would be followed by another public listening session, and a session on the city’s sidewalks and paths. Then the committee will issue a report and recommendations to the common council before dissolving.