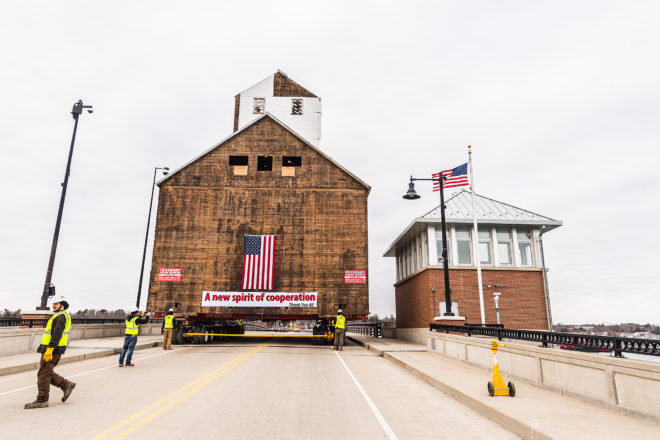 The Granary was moved across the Maple to Oregon Street Bridge in March to save it from the wrecking ball. Photo by Len Villano.

The uncertain journey of the Teweles and Brandeis grain elevator will not continue back to its original location on the west waterfront anytime soon. After two contentious hours of discussion at Tuesday’s meeting of the Sturgeon Bay Common Council, the council voted not to allow the Sturgeon Bay Historical Society (SBHS) to move the building back across the bridge to the west side.

The request was made by alderpersons Kelly Catarozoli and Kelly Avenson, who argued that time is of the essence in securing the future of the structure.

“I put this on here because that money and that asset might be gone,” Catarozoli said, inferring that the patience of the donor who has pledged $1.25 million for the restoration of the building is running out. “It is getting to that point that this council needs to make a decision.”

But council members were hesitant to approve the request before the Ad Hoc Waterfront Planning Committee completes their work gathering public input and creating a new community-driven plan for the property. Several members of that committee, including co-chair Dave Shanock, urged the council to table the motion.

“Are we wasting our time with this committee if the city council is just going to move this building without our input?” he asked.

“This committee was formed with the idea of transparency,” he said. “Even if tabled for one month so our committee can meet and have a discussion about it.”

The rest of the council expressed hesitancy in undermining the ad hoc committee’s work. Laurel Hauser pointed out that the granary has been part of every adopted plan for the west waterfront, but said she did not want to undermine public trust in the process.

“The most important thing we can do in this community is to build up some trust,” she said. “The most frustrating thing the last couple years is when the process isn’t followed.”

Catarozoli implored the council not to risk losing a $1.25 million donation.

“You’ve got to have a lot of tax increment to get to $1.25 million for public improvements,” she said. She said the Granary could be moved there and be used for any number of purposes, such as a warming house for an ice rink, a museum, or a public gathering space. “What else are you going to get there? Nothing that will get you any money.”

“There should be a plan not only for the use of the building but also a financial plan,” alderperson David Ward said. “How much of that donation has been used already and how much is it going to take to rehab that building.”

“There’s a lot of questions that have to be answered before we can make a recommendation on this,” he said.

When multiple alderpersons asked Mayor Thad Birmingham to allow representatives from SBHS to answer some of those questions, as has been done for other questions before the council, the Mayor refused. Catarozoli asked attorney James Kalny if there was any recourse to that ruling, and he advised that the ruling could be challenged by the council. After that challenge passed 6 – 1, Birmingham directed his ire at Kalny.

“I don’t feel as though I am in charge of the meeting,” Birmingham said as he glared at Kalny.

“To develop a plan we need to plan the foundation,” Weber said.

Weber’s testimony indicated that SBHS may not be able to store the structure on its present location much longer, and said that if work doesn’t move forward soon, the donation to restore the building is at risk.

“If it doesn’t maintain its donation, we’ll be selling it off,” she said. “It’s not your problem it’s ours.”