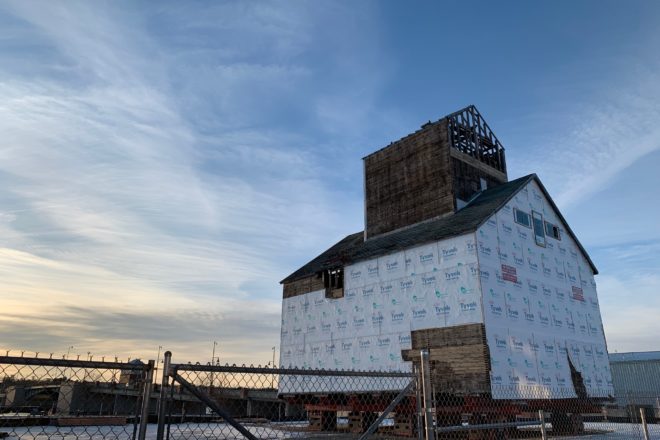 Shipyard Partners, the owners of the land where the Teweles and Brandeis grain elevator has stood since it was moved in March, served the Sturgeon Bay Historical Society with an eviction notice Jan. 4. Photo by Myles Dannhausen Jr.

When the Sturgeon Bay Historical Society moved the Teweles and Brandeis grain elevator across the Oregon Street Bridge in March of 2018, the granary donned a banner that proclaimed the dawn of “A new spirit of cooperation.” 5That spirit was nowhere to be found Tuesday at a Common Council meeting where the city accepted the donation of the granary by the Sturgeon Bay Historical Society. It includes a $1.25 million donation to refurbish and enhance the building once it is moved back to its original location on the west-side waterfront. Council members David Ward and Seth Wiederanders were the lone votes against the move. David Hayes was absent.

Details of the move will be finalized at the Feb. 5 common council meeting.

The contentious meeting in packed council chambers included accusations of mayoral malfeasance and a threat by Mayor Thad Birmingham to halt proceedings after the audience repeatedly interrupted debate.

Speakers are selected in the order they turn in slips requesting to speak. The mayor denied the charge, and later in the session Thomas Wulf claimed responsibility, saying that he encouraged individuals to come to city hall early to fill out slips to speak. Wulf also announced that a group will be filing an appeal of the Department of Natural Resources ruling on the location of the ordinary high water mark that was made Jan. 3. Several members of the West Waterfront Ad Hoc Committee implored the city not to approve the granary move until the committee can complete its work. After the city dissolved the Waterfront Redevelopment Association, it formed the ad hoc committee to take a new look at options for the west waterfront property between the Oregon Street Bridge and Door County Maritime Museum.

“All I’m asking, again, is that we wait and let our committee do its job. We’d just like to do our due diligence,” said committee member Mark Schuster, reiterating the plea he made Nov. 23.

Birmingham said the decision endangers the future of the ad hoc committee.

“It’s embarrassing that we decided we were going to ignore the work of the west-side ad hoc committee,” he said.

Council member Laurel Hauser, co-chair of the ad hoc committee, voted against moving the structure in November due to the timing of the proposal but said she supports the move after reviewing the path that got the city to this point. She also said time is of the essence now that the historical society has been issued an eviction notice for the building from Shipyard Partners, the owners of the land where the granary now sits on the east-side waterfront.

“The city council adopted the recommendation of the Historic Preservation Committee,” she said. “This has been transparent. It went through the committee process.”

The motion states that no taxpayer dollars will be used to move or renovate the structure, and it requests that the Door County Community Foundation facilitate conversations between the historical society and the city to reach an agreement that includes a schedule of deliverables and protects both parties’ interests.

Barbara Allmann expressed exasperation at the fact that the city has never seriously discussed accepting the $1.25 million pledged by an anonymous donor in October of 2017 to restore the granary.

“I still can’t understand that someone offered us $1.2 million, and we won’t even consider it, and we’re bemoaning not getting a small grant for Little Lake,” Allmann said. “You may not want it, but I’ll listen to anybody who’s got $1.2 million.”

David Ward spoke extensively in opposition to the proposal. He said he believes citizens overwhelmingly want the building gone, and he reiterated his concerns that the granary would come with hidden costs.

Hauser reminded the council of a previous engineering study commissioned by the city that placed the cost of rehabilitation at $442,000 and noted that the donation includes the stipulation that funds will be held in escrow to fund the removal of the granary if the rehabilitation falls short of any agreement.

Several times since the donation offer was made in October of 2017, Ward has questioned the sincerity of the offer, particularly that the donation offer from the Community Foundation is subject to final terms to be worked out once a collaborative vision has been articulated.

He repeated that concern Tuesday, but the council has never asked representatives from the Foundation to come before the council to answer any questions about the offer.

Both Hauser and Allmann referenced other battles over community projects that were highly contentious in their day but grew into beloved community assets. Hauser referenced the Door Community Auditorium, Kress Pavilion and Door County Senior Center, all of which faced fierce opposition. Allmann pointed to a structure just a few steps from City Hall.

“If the bridge would have gone to referendum years ago, that bridge wouldn’t be here today,” Allmann said, referring to the Michigan Street Bridge that city leaders wanted to remove 15 years ago before a citizens group led by Christie Weber rallied to save it. “Now it’s on our stationery and on the sides of our trucks.”

Earlier in the meeting, Mayor Birmingham’s proposal to put the future of the granary to a referendum ballot in April failed.

• Allmann announced that the Ethics Committee will present its guidebook at the next board meeting.