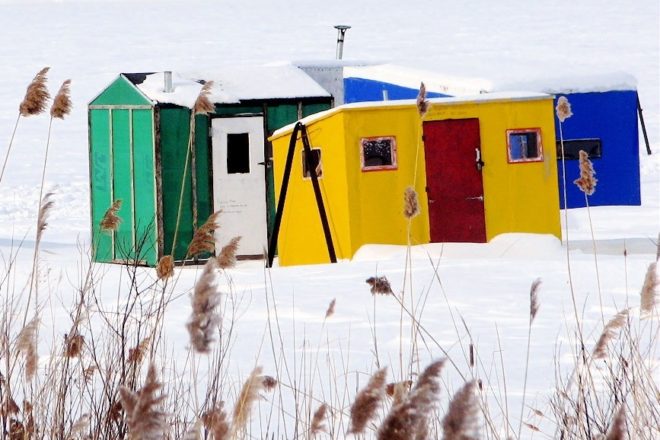 Colorful ice shacks near shore off Little Sturgeon Bay at the end of a previous season. The DNR estimates that guided and unguided anglers on the ice of Green Bay combined to reel in more than 188,000 whitefish last winter — an all-time high. Photo by Kevin Naze.

Will a change in leadership be enough to revive a proposal for the first National Marine Sanctuary in Lake Michigan?

Supporters hope so, and some believe it should include Door and Kewaunee counties, where an incredible number of underwater shipwrecks are worth protecting and promoting.

In February — after nearly a decade of work by citizens — Gov. Scott Walker rescinded the Lake Michigan nomination.

Originally encompassing about 875 square miles from south of Port Washington to north of Two Rivers, the proposal grew to 1,260 miles from southern Ozaukee County to northern Kewaunee County.

The only National Marine Sanctuary in the Great Lakes is at Thunder Bay on Lake Huron. Its visitor center draws more than 80,000 people a year, and the annual economic impact is estimated in the millions of dollars.

Critics of the proposed Lake Michigan designation say it could lead to federal intrusion on state and private property and negatively impact fishermen. However, in 17 years of the Thunder Bay refuge, no such issues have occurred. The only major rule change proposed would be no anchoring on a wreck.

A few of the other outdoors newsmakers in 2018 were a wild April snowstorm that challenged early-season turkey hunters and trout fishermen; the state’s first managed elk hunt; and the introduction of the DNR’s new Hunt Wild app.

A week-long thaw combined with sunshine and wind has melted, broken up, thinned or moved much of the ice that had already been offering walk-on action in some nearshore areas.

DNR conservation warden Chris Kratcha encourages anglers to be patient and let colder air thicken ice in the coming weeks. Experts recommend at least four solid inches for walking, six inches for snowmobiles or four-wheelers and a foot or more for trucks.

Some of the first spots to freeze each winter are bays, harbors and marinas protected from large waves and heavy currents.

As always, check with local bait shops for the latest conditions. If you do go, it’s best not to go alone. Safety specialists recommend you have ice picks, a life jacket and long rope in case you or another member of your group breaks through. Use a spud bar to test ice as you walk out.

Hansen was hoping to find some answers in a Dec. 17 meeting with guides at the DNR’s regional office in Green Bay.

Meanwhile, DNR creel surveys estimate that the whitefish catch by non-guided anglers has nearly tripled in the past decade, from 54,000 and change in 2009 to more than 151,000 last year.

Each count is held on a single day in an established 15-mile diameter circle. Wisconsin hosts more than 100 counts, including five done under bluebird conditions last weekend in the Brussels, Dyckesville, Ephraim, Sturgeon Bay and Washington Island areas.

Learn more about Wisconsin birding opportunities at wsobirds.org or ebird.org/wi.

A new late-season goose hunting opportunity is being offered in Door and Kewaunee counties.

The hunt began Sunday and runs through Jan. 3, with a daily bag limit of three Canada geese and varying limits for other goose species.

While it’s likely that few hunters will take advantage, there are thousands of locally-raised geese still hanging out in the area. They roost on water or shorelines and beaches in between feeding flights to farm fields.

It’ll be antlerless-only for all whitetail hunters Dec. 24-Jan. 1 in Door and Kewaunee counties due to a special firearm deer hunt.

All hunters, except those participating in the late goose hunt, must follow blaze orange or blaze pink clothing rules.

Full camo is legal through Dec. 23 and again beginning Jan. 2 for bow and crossbow deer hunters as well as those trying for wild turkeys, squirrels, cottontail rabbits and predators.