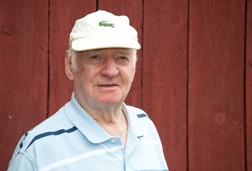 Green is Jerry Viste’s middle name, or it should be with all the work he’s put in fighting for the environment as the executive director of the Door County Environmental Council (DCEC).

The tireless environmental advocate lives on a Southern Door farm, which his son operates. There he encourages his son to use environmental friendly farming practices, such as following the soil test results so as not to strip the land of nutrients.

I caught up with Viste to talk about his role with DCEC and the progress in environmental advocacy on the peninsula.

Keeping up: Much of Viste’s role is in advocacy – informational sessions and letters to the editor. That means a lot of time spent getting informed about issues. “I attend a lot of briefing sessions and statewide conferences – it’s part of my job. Maybe I’d be doing some of these things if I wasn’t the executive director, maybe I do them because I am. What came first the chicken or the egg?”

More than words: “My favorite part of the job is when we do something, like the recent water testing thing in Liberty Grove. We worked with the town board and that’s something we haven’t done much…we were able to get [88 wells tested.] When Kewaunee County did it they got 12 samples.”

What’s next? “One thing that we should be doing much more of, and we’re falling on our face in that, is working with the young people. We’re pretty much at a loss as to how to inspire young people, but we’re exploring a few avenues.”

Ahead of the times: “I drive a ‘94 Ford Taurus that gets better mileage than some of the new cars do…They brag about getting 30 miles to the gallon – I’ve been doing that for years.”

Pet Peeve: Unlwaful burning of garbage has Viste, like many Kewaunee County residents, concerned. “We’re way ahead of Kewaunee County because they don’t have a burning barrel ordinance at all, but the problem with an ordinance is there’s no enforcement…people have learned to burn their garbage on a foggy day.”