On Nov. 6, voters will select Wisconsin’s governor, all 99 members of the state Assembly, and 17 of the 33 members of the state Senate. When they take office in January, they will face pressing issues ranging from a looming worker shortage to pressures on state, local and school finances. Drawing on our recent research, we provide a guide to these topics to help voters make informed decisions.

To help voters sort through the noise, we have identified 10 questions that candidates should address regarding six key issues facing the state:  transportation, economy and workforce, education, state-local relations, taxes, and Wisconsin’s fiscal health.

These questions emanate from recent research conducted by the Wisconsin Policy Forum on these topics.

Wisconsin’s economy faces a number of long-term challenges. Demographically, the state’s population is aging, and its birth rate is declining. As the Wisconsin Policy Forum pointed out in 2016, Wisconsin will need at least an additional 300,000 workers in the next 20 years just to keep its workforce at current levels.

Additionally, the state’s recovery from the Great Recession has been uneven. While employment grew statewide between 2009 and 2017, jobs actually declined in 15 counties, many of them in northern Wisconsin. These same areas have also seen a significant decline in the working-age population that is not being replaced. 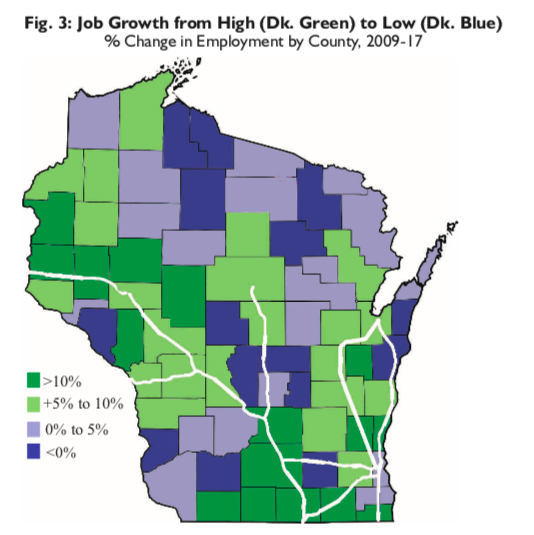 Economic strength, a measure we devised in 2017 to compare the combination of jobs, population, labor force, residential values, and unemployment between counties, shows a similar pattern. The state’s strongest economies are along the Minnesota and Illinois borders; the weakest are in northern Wisconsin.

The potential impact of these trends becomes clearer by looking at the working-age population.

In 20 counties, the workforce-age population (25-64 years old) has declined since 2000. Fifteen of the 20 counties are in the north, roughly running along a line from Bayfield and Burnett counties in the northwest to Door County in the northeast.

At the same time, the replacement age population, those between 15 and 24 years old, remains low in many of these same counties. Our estimates, based on U.S. Census figures, show that in 13 counties, the projected 25-34 year old population is enough to replace less than half of potential retirees.

In an additional 23 counties, estimated replacement rates are less than 80 percent. To guarantee sufficient workers, the state would need to retain more young people, increase the percentage of the population that works, or attract workers from other states or abroad.

1) What policies should the state pursue to attract and retain the employees needed to maintain Wisconsin’s workforce in the next 20 years, or how should Wisconsin prepare instead for a smaller, older workforce?

2) Given our recent research showing that, in general, the growth in Wisconsin’s economy has been uneven, what steps would you take to promote development in areas that have seen the slowest growth, particularly rural and northern Wisconsin?