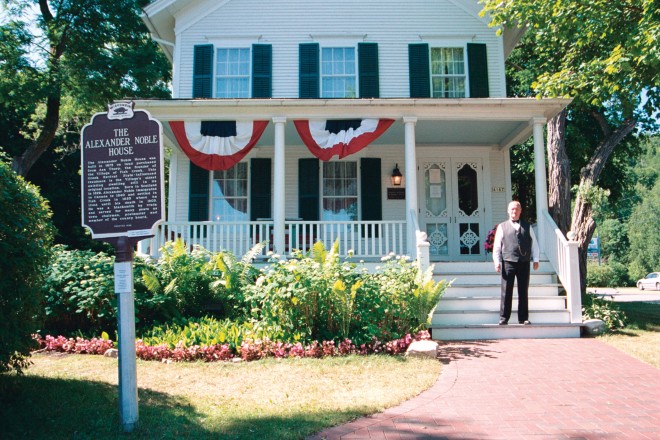 The best on the pike I know:

With its back to the rock and its face to the sea,

Where the rollicking breezes blow.

As snug as a bug in an old woolen rug,

It lies there embowered in green:

You may go where you like, on any old pike,

No cozier village is seen.”

– from Old Peninsula Days, Tales and Sketches of the Door County Peninsula, by Hjalmar R. Holand

Perhaps no longer “embowered in green” as this ditty describes, ye olde towne Fish Creek can be found “cozied” up to today’s shops and condos. However, one can step into the past by taking the official historic tour, if you can keep up with the tour guide, octogenarian Helen Allen, as she spins the old town stories. If she senses her audience is interested, she’ll point out where she was born (now Mr. Helsinki’s restaurant), where her grandparents lived (now a cottage store by the Whistling Swan), and where she had her wedding reception (part of the old Welcker’s resort, and now a private home on Maple). Her parents, Lester and Amanda Schrieber, and later brother Ed owned and ran the General Store (now the Fish Creek Market) between 1916 and 1970.

One of her stories tells of Dr. Gertrude Howe (1913-1995), the last resident of Noble House, one of Fish Creek’s oldest standing homes. Helen struck up a friendship at the bridge table with Gertrude and described her as a memorable personality and a free spirit who did things women in her time wouldn’t think of doing. She graduated Phi Beta Kappa from the University of Illinois Medical School, became a pilot and owned her own Cessna while working as a pediatrician in the rugged Upper Peninsula and…she smoked!

During Dr. Howe’s final years at Scandia Nursing Home developers started hovering over the then empty Noble House and members of the town’s historical society held their breath concerning its future. The Noble family dwelling was one of the last houses in the community that had been at the same location (Hwy 42 and Main) for 123 years and the historical society wanted to turn it into a museum.

Virginia Kinsey, who ran the Summertime Restaurant with her husband, grew up in the house across the street from Gertrude Howe. When Virginia’s friend died in 1995 leaving the Noble house unoccupied and sorely in need of repair, she decided it was time to save the historic home. Virginia had founded the Gibraltar Historical Association (GHA) in 1984 to rescue the Town Hall from becoming a parking lot, so she marshaled her troops once again to save Noble House.

When the caretakers of the Noble estate agreed that the land and house should be preserved, Virginia and her GHA friends let out the breath they’d been holding and established the Noble Historic Square Fund. They raised two-thirds of the total cost of $500,000 and the Town of Gibraltar raised the rest. The town owned it and the GHA operated it. The first thing they did was to protect it – the Noble House was registered with both the Wisconsin and the National Register of Historic Places in 1996.

Typical of small town America, the GHA’s fundraisers ran the gamut from raffles to bake sales and auctions to estate sales, but the most imaginative campaign was “brick by brick” where a donor bought a brick and had the family name or “in memory of” embossed on it. Many of these donated bricks form the entrance walk today.

Renovation and restoration began immediately. The house was in sad repair and in need of new plaster work, heating, lighting and plumbing. Decades of wall coverings had to be replaced and wood floors needed sanding. There were home furnishings, clothing, and papers and records dating back to the time of original owner Alexander Noble. It seemed to the workers that nothing had ever been thrown away! Noble’s blacksmithing tools were still in the garage and the deed signed by Fish Creek founder, Asa Thorp himself, for the vast sum of $260 was discovered in Noble’s papers. Also found was a sketch that his daughter, Ula, age 22, used in designing the house that stands today after the original one burned down during the winter of 1875.

Everything was painstakingly sorted, catalogued, and cleaned by the many volunteers with direction from a hired firm specializing in the restoration of historic places. Local co-owner of The Thorp House Inn, Chris Falck-Pedersen, researched and spearheaded the team responsible for the authentic interior décor. The museum proudly opened for business the summer of 1998 on the busiest corner in Fish Creek where it had survived for so many years.

Alexander Noble (1829-1905) was one of Fish Creek’s founding fathers who moved from his native Scotland to Chambers Island in 1856 where he built the first sawmill turning the island into a busy lumber camp. In 1862 he moved to Fish Creek to raise his family and became, at various times, blacksmith, postmaster, town chairman and county board member. All homes before his had been log; the Noble house was the first to be made of lathe and plaster. The original property had several out buildings where Noble Park is now located.

Noble House is a monument to one of the oldest families in Fish Creek who kept it continuously until Gertrude Howe died: from Alexander Noble’s much younger second wife Maria, to their daughter Nellie, and to Nellie’s daughter Gertrude, who cared for her mother in between flying jaunts to and from the “Soo” (Sault St. Marie). Records show that Maria and Nellie were both strong women so one can see where Gertrude inherited her spunk. Maria lived almost 30 years after her husband and in order to pay the taxes and keep the house, she sold off much of the additional property Alex had accrued. An individualist in her own right, Nellie went off to school in Illinois and became a secretary to Harvey J. Firestone, Jr. in Chicago and in 1909 married Donnell Howe, an FBI man. When he died in 1954 Nellie returned to Noble House to live until her death in 1962 and Gertrude maintained the home until she herself retired there in 1968.

Inside Noble House you will find pictures and keepsakes of these women as they step off the pages of history, a history so carefully preserved by the men and women of Fish Creek and the Gibraltar Historical Association who care about their town and its roots. Thanks to them the Town Hall survived demolition and the Noble House is alive again and welcoming callers.

Fish Creek Echoes: a Century of Life in a Door County Village ed. by Edward Schreiber and Virginia Kinsey, 2000