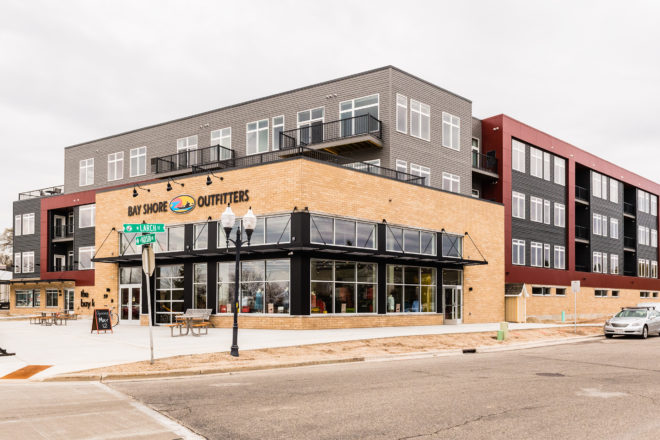 The Bay Lofts apartments opened in Sturgeon Bay in May to great fanfare, one of the first major projects completed in the new west waterfront district.Photo by Len Villano.

Those who have not been through Sturgeon Bay in a while may be surprised at the new urban feel to Madison Street with the opening of The Bay Lofts luxury apartments.

The site is the former home of the Harbor Place Shoppes.

“I’ve been pleasantly surprised. The architectural style was a deviation from a lot of what’s been built in Sturgeon Bay. Folks have been largely quite supportive, some enthusiastically supportive,” said Chris Laurent of Urban Apex, the Madison-based real estate development business that built The Bay Lofts. “Our thinking was that something with a nautical feel would stand out more than something with a warehouse feel…. I’m delighted. I’ve done a lot of different buildings and projects – most of them workforce housing – but I’m proud of Bay Lofts. I like the way it sits, the way it’s in the context of what’s there. I think we’ve accomplished the city’s goals.”

The building has 37 apartments, including 10 one-bedroom units, 22 two-bedrooms and three three-bedrooms. The doors opened on May 1.

“Leasing is strong,” Laurent said. “We should be half full in the next week or two. We’ve had a lot of interest.”

Laurent described The Bay Lofts as the follow-up project for his company and his build partner, Jeff Gillis, after completion of Middleton Station Apartments in Middleton, Wis.

“We’re right next door to the Capital Brewery,” he said. “We’ve been lucky enough to find good locations with willing communities with some vision. This is the first development we’ve built that is mixed use, with a commercial component going in there. We’re blessed to have a partner like Mark Schuster and his friends at Bay Shore [Outfitters]. One of the things Mark was interested in was expanding his retail sales to a stronger service component. He was concerned initially, ‘Are you going to want all that stuff in front of your shiny new apartment building?’ We’ve already got two families moved in with kayaks. So people who are choosing Bay Lofts as a home opportunity want to be near that activity.”

Oddly enough, Schuster said that when he and his business partner Rick Wylie were first looking to add a Sturgeon Bay location in addition to their Sister Bay store, they wanted to be on the very corner where their new store is located.

“We’re excited about this,” he said. “We’ve been down in the Sturgeon Bay market now for eight years and we’ve seen growth every year. We were looking for something bigger and more lasting.”

“We’ve been working with these guys for over a year. They’re great to work with, and it fits with what we need in this market,” Schuster said.

“With the Ahnapee Trail, historic Sturgeon Bay and Potawatomi State Park, all just minutes away from our front door, it just makes sense,” he said. 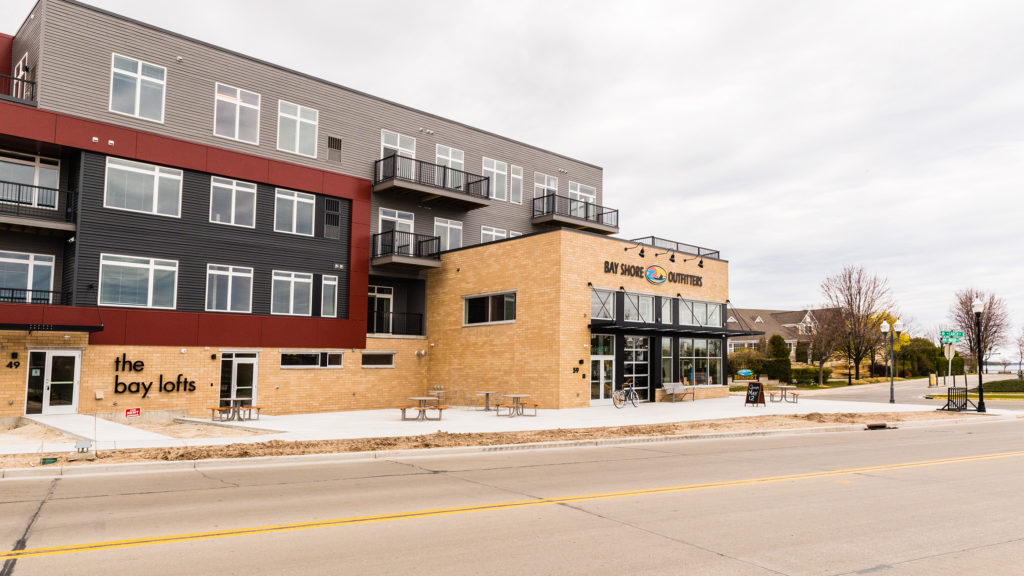 The store also has an outdoor patio that Schuster said he hopes people use as a gathering space, in addition to activities the store plans to hold in that outdoor space. The store officially opens May 12.

Laurent said he had a great experience working with Sturgeon Bay officials and looks forward to working with them again in the future.

“I think, as your business strategy just in my own career, it’s always easiest to go where folks want you and you have common objectives,” he said. “The council’s been great to work with, the staff’s been great to work with, and the mayor’s been great to work with. When you have that sort of alignment, you can make decent things happen and have good, honest conversations of what the objectives are. The city worked with the planner Vandewalle & Associates, and Brian (Vandewalle, founder and president) and I have worked together 15, 20 years. We shared a lot of similar objectives. We’ve really done our best work in inner cities, in catalyzing downtowns. This area in the west waterfront district is an area the city has focused on through planning. Obviously the hotel has had a storied history. We like to be a part of that renaissance. We did that to some extent in Middleton.”

Laurent is personally excited by the renaissance taking place in Sturgeon Bay.

“With the Steel Bridge Festival to Sonny’s and all that vibrancy that’s emerging. Sturgeon Bay is a town with 10,000 people and it’s got an energy,” he said. “I’ve been going to Door County since I was 10 years old. We had always driven through Sturgeon Bay on the way to Baileys Harbor. I think my family and others are rethinking that. Sturgeon Bay has a lot to offer and it’s really becoming the vibrant center of the peninsula. I think for a long time it was very protective of maybe not doing tourism and focusing on shipbuilding. I think it recognizes now it can do both. It can have strong industry and be authentic. One of the best views, I think, during the course of construction was looking out over the bay to see the shipyards and the lights at night. Where else do you see something like that?”

A ribbon cutting will be held at The Bay Lofts at 3 pm on May 19. “The public is invited,” Laurent said. There will be remarks by the development team, new DCEDC Executive Director Caleb Frostman and Mayor Thad Birmingham. Bay Shore Outfitters will celebrate with activities, drinks and food from 5 to 9 pm.