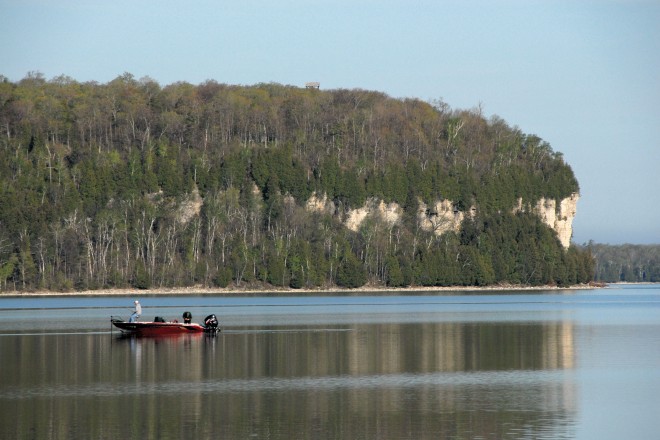 “The Small Mouth Bass,” said fisherman Don Hewkin of Zion, Illinois, “are what bring me.” He and his fishing partner Dave Davis have entered the Sturgeon Bay Open Bass Tournament every year since 1994. The contest is an annual event on the weekend following Mother’s Day.

Hewkin likes the number of fish in the bay and their readiness to bite on lures. He and Davis have a record, winning four tournaments, most recently in 2007, using artificial bait they had made specially for the event.

Caleb Colwell also likes the Sturgeon Bay tournament because of the fishing. “You catch a lot of fish!” he said. He and his fishing partner Chad Adrians, both from Green Bay, have entered the contest for almost 15 years now, taking first prize in 2000.

Winning the bass tournament isn’t just about the satisfaction of catching the biggest fish, however. This year’s first prize is a Ranger 188 VX Comanche bass boat with a Mercury 175 XS motor, along with $10,000 in cash. The total prize package is valued at $42,600.

John Baur of Sturgeon Bay, who has been president of the Sturgeon Bay Open Bass Tournament for the past two years, has served on the organizational committee for 15 years, almost from the inception of the event in 1991.

In the early days of the tournament the entries climbed to well over 200 teams of two fishermen each, Bauer said. “It became a headache,” he continued, “and the DNR [Department of Natural Resources] recommended that we limit the entries to 200.”

Returning fishermen from the previous year submit their entries on or after March 15th; for new entrants, the date is March 30th. The first 200 teams are registered, with the next five teams placed on standby in the event of cancellations. Each team pays an entry fee of $410. While this might seem high, “most tournaments of this size charge about $750,” Baur said.

Those hoping to win prizes agree to fish with artificial bait, use no more than two rods at a time, troll with non-combustible engines, and bring no alcoholic beverages in the boat.

This year the fishermen leave Sturgeon Bay on Saturday, May 16th, in two flights, the first at 6:30 am, and the second, 7:00 am. Rules permit them to fish only the waters of Green Bay, observing a boundary that extends as far north as Gills Rock and as far south as Dykesville, and within five miles from the shore of the Door County peninsula.

The first flight returns by 3:00 pm, the second by 4:00 pm, with the weigh-in beginning at 3:00 pm. Each team enters their six largest Small Mouth Bass; the fish must be at least 14 inches long and kept in a live well.

On Sunday, the second day of the tournament, fishermen leave at the same time, but return one hour earlier, again with their six biggest fish. A composite weight of 12 fish constitutes an entry and the basis for awarding prizes. Last year the winning entry weighed in at 56.77 pounds.

The Sturgeon Bay Open is a catch and release tournament. Both days after the weigh-ins have been completed, the live fish are transported to various locations between Dykesville and Gills Rock and released. The few bass that don’t survive are filleted and frozen for a food pantry.

An adjunct to the Sturgeon Bay Open is the Fritz Shurmur Memorial Pro-Am Tournament that is held on Friday of the same weekend. Entrants in the open (the professionals) who agree to take with them event sponsors (the amateurs) compete for additional prize money. The amateurs vie for St. Croix rods as prizes.

Events open to the public that accompany the weekend of fishing include a raffle, a scramble golf outing at Idlewild Golf Course on Thursday, the Dock Dance on Saturday afternoon with music by Centerline, and a mid-day appearance on Sunday by Patrick from SpongeBob on Cartoon Network.

Bass fishermen have the opportunity to return to Sturgeon Bay for the fall Open Bass Tournament, a one-day version of the spring event. Scheduled for the weekend after Labor Day, 100 teams pay $210 each to compete for cash prizes.

However, the professional fishermen are not the only ones to benefit from the tournaments. Bauer reported that surveys indicate anglers come to Sturgeon Bay from 11 states and Canada, bringing over $350,000 to the local economy for the spring event alone.

Last year’s winners underscored the international scope of the event; five of the 200 teams were Canadian and did well, including Bill Godin and Mike Salvador who took first place. “Four were in the money,” Baur said, “and three in the top eight spots.”

In addition to attracting tourist dollars, Baur pointed out that the tournament also promotes responsible, sustainable sport fishing. Ten dollars of each entry fee is placed in a conservation account that has helped fund the building of a pavilion at Sawyer Park, the upgrading of park boat launches, a rescue boat for the fire department, an underwater camera for DNR fish studies, and soil and water control of invasive aquatic species.

While Baur is the president of the Sturgeon Bay Open Bass Tournament, holding office does not preclude his participation in the event. “Organizing the tournament doesn’t give me any advantage!” he laughed. “If anything it makes it worse!” Because of his responsibilities running the event, he said, “I can’t pre-fish. It’s a disadvantage!”

Baur spoke generally of strategies and techniques that he uses when fishing for bass. Because the water is colder in spring, he said, the fish are less active and more receptive to slow motion fishing. In cool water he does a slow presentation with a tube plastic bait, casts, lets it lie on the bottom, twitches the lure, and reels only to take up the slack in the line.

But he watches for warmer currents – “bass like 55-degree water,” he said – as the fish will follow them. Then the strategy changes, perhaps using a plastic grub bait, casting and constant reeling.

Sometimes he will use a suspended hard artificial bait that sits on the surface when it is cast, but descends to a specified depth when the line is reeled. Twitches of the bait may get the attention of a fish. A non-suspension hard bait, on the other hand, requires a constant retrieval for maintaining a depth.

“A lot depends on the aggressiveness of the fish,” he said.

In general, fishermen have favorite locations, or “hot spots,” Baur said – some secret, some lucky, some that fit a personal style of fishing. But the good spots vary from year to year and “weather changes the fishing pattern. You must have a plan B and a plan C, too.”

For the first time this spring Don Hewkins is fishing with his son Jeremy rather than his long time teammate. “My partner suggested it,” Hewkins said. “I thought that was cool!” Jeremy is 28 and an experienced fisherman.

Hewkins, who competes in 30 or so tournaments each year, likes the Sturgeon Bay Open Bass Tournament. “The tournament is run really well,” he said, “and the people are great.”

If going fishing and catching the really big one is your dream, visit www.sbobt.org.