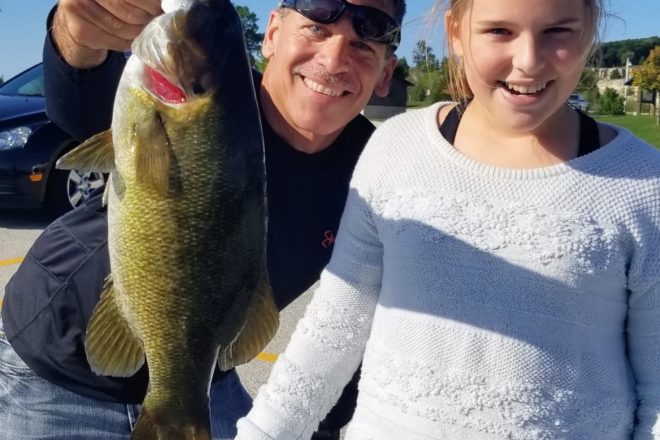 Using the classic “hold the fish out as far as you can so it looks even bigger than it is!” pose, Kevin Naze shows off a smallmouth bass reeled in by daughter Nikki at George K. Pinney County Park north of Sturgeon Bay during a previous spring’s outing. The fish was CPRed: caught, photographed and released. Bass season opens May 1 in much of the bay. There are special rules inland, as well as for the Mink River and Washington Island areas, so pick up a copy of the 2021-22 fishing regulations to review, or visit dnr.wisconsin.gov/topic/fishing/regulations. Special to the Peninsula Pulse.

After a pandemic-driven one-year absence, the Sturgeon Bay Bass Tournament is back with a new, on-the-water weigh-in. Generous donations from John Hynes of West Shore Outfitters and Fisheries Forever of Green Bay, along with several smaller donations, provided money to purchase 105 Brecknell scales – the same type that the Major League Fishing and FLW tournaments have used in Sturgeon Bay in recent years.

“After seeing how much our community liked that format with fish released right where they are caught, and most of all, no long boat rides in rough water, it was obvious that is the right way to do our 2021 event,” said tournament organizer Gary Nault.

Nault said the committee is committed to doing all of its tournaments this way in the future, and it has spread the word that it will allow other tournaments, big or small, to use these scales as well.

“We are also very excited to show how technology has opened the door to provide real-time scoring all day for both the anglers and the public to watch what is happening,” Nault said.
The FishDonkey app, developed in Minnesota, will serve as the scoring and verification method for bass as they’re caught.

“Although this format loses the weigh-in, we feel the all-day publicity far outweighs the loss of a live weigh-in, and it sure is better on our smallmouth resource,” Nault said.

A practice event will be held the day prior to the contest so anglers can familiarize themselves with the new method and possibly cash in on some “big fish” money.

A Kids’ Day will be held May 8, with T-shirt fish printing, a kids’ tournament and other events. Learn more at  sturgeonbaybasstournament.com.

The DNR is accepting public comments regarding the next 10 years of wolf management in Wisconsin, including the possibility of a fall 2021 harvest season. Online input is open now through May 15 at dnr.wisconsin.gov/topic/wildlifehabitat/wolfmanagementplan.

A new Wolf Management Plan Committee is being formed with a diverse group of stakeholders on both the pro-management and “leave them alone” sides.

The DNR says it will write an initial draft of the wolf plan that’s guided by science and input from the committee and the public. That draft will be available for public review and comment, but not anytime soon: The agency says the final draft isn’t expected to be delivered until mid-2022.

Ticket sales for the 33rd Baileys Harbor Brown Trout (BHBT) Tournament ended Thursday, but you can still get in on the excitement of the area’s first open-water contest of 2021.

A total of $8,000 in cash and prizes is on the line, to be shared among the top 40 finishers. Catches may come from Green Bay or Lake Michigan waters off Door and Kewaunee counties.

The BHBT Tournament’s Facebook page will be posting leaderboard and big-fish updates Thursday, Friday and Saturday, April 15-17. You might also be able to see trophy catches on the social-media pages of the weigh-in locations: B&K Bait and Tackle on Washington Island, The Last Stop in Ellison Bay, Baileys 57 in Baileys Harbor, Howie’s Tackle & Archery in Sturgeon Bay, and Hooked Up Tackle Shop in Algoma.

Beginning April 30, observation towers and playgrounds will be open at Wisconsin’s state parks, and the capacity for open-air shelters, amphitheaters and outdoor group campgrounds will be increased to 100 people. Family camping and outdoor group camping will continue to be available, and there will be drive-up window service and concessions, including firewood sales.

Rock Island will remain closed to all visitors through Thursday, May 27, to allow for repairs to the dock, including dredging of the dock area. Camping reservation holders will be contacted directly, and those who are scheduled to arrive May 26 or May 27 will be given the opportunity to shorten their stay to arrive Friday, May 28.

As of April 9, Lake Michigan was 22 inches above its 100-year monthly average, but 14 inches below last year’s monthly record. Water levels were still up 53 inches from the record monthly low, set in 1964.