Stephen Woodward stands before his sculpture “Untitled,” created as a celebration of his father’s life. Photo by Len Villano.

Tucked in the woods, at the northern end of the peninsula, is the studio of sculptor Steven Woodward. A native Minnesotan, Woodward has been working in Door County for the past five years. His variety of pieces – featuring many different mediums – fill his studio space and span more than 30 years worth of work.

Woodward’s artwork has been shown all over the United States, a majority in his home state of Minnesota. His sculptures are most often created out of wood, but he also uses bark, flags, rag rugs and even dictionaries.

This past summer his neighbors, Jim and Carol Maronek and Bob Bentley, invited him to be a part of their Hidden Galleries Tour, where he opened his studio for the first time to the Door County public.

“It was a real treat for me, and I jumped at the chance. I was really enthused by being able to have people up to the studio and talk to them about 30 years worth of work,” Woodward said. “It was a ball to have people in, I forgot how much I like to show work in the studio rather than in a gallery.”

Woodward was excited to be able to share his pieces with people who were unfamiliar with his work and the size and scale he works with. “Art is about communication,” he said. “People are so used to coming in (to galleries) and seeing small works that can fit above your couch, but the scale what I work on has never been that.”

Woodward’s passion for art began early in life. He knew he wanted to be an artist since junior high, but didn’t realize he wanted to be a sculptor until college. “I went through printmaking, silk screening, pottery and every thing else. I did them all very studiously,” he said. Woodward graduated from college with a double art major.

“I chose sculpture so long ago because I thought it would be antithetical to the age. The age that I was looking at was looking at photography and recording, rather than experiencing,” he said.

This sculpture is an example of Woodward’s recent “Inside Out” pieces. Photo by Len Villano.

Woodward liked the idea of creating something that could only be understood and fully appreciated by being in its physical presence. It seemed an appropriate challenge for what he was looking for, he said.

He was influenced by the times early in his career and spent the first three years of his career cutting apart 35-millimeter cameras and reducing them to images.

After working on such small pieces in his 3,000-foot studio, he began creating larger pieces that filled the space in which he was working. In 1988, Woodward built a sculpture that not only used much more of his studio space but also merged the architecture of an A-frame house and the hull of a ship.

Woodward was among 18 other artists commissioned by the Walker Art Museum to create pieces for the opening of their Sculpture Garden. Installation of the piece, titled ‘Another Conundrum’ was on the roof of the museum until 1996.

When asked about his process, Woodward said he likes to let ideas gestate for three to five years before he puts his work into action. “Nice and slow. Sculpture is a slow, methodical practice”

“I don’t always wait around for a museum, a commission,” he said about starting a new sculpture. “If I’m inspired, I get after it.” 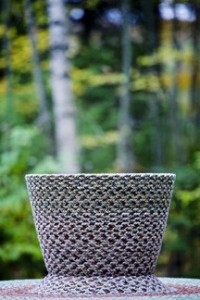 Woodward uses a variety of media to create his sculptures, including hand-braided rugs. Photo by Len Villano.

One of Woodward’s sculptures, ‘Untitled,’ is a commanding, casket-shaped structure that stands 15 feet tall. It’s a “box within a box” as he calls it, and was created as a celebration of his father’s life. He had the idea for the piece for a long time, but it wasn’t until a few other friends passed away that he was inspired to create the sculpture.

“It was originally supposed to be much bigger, one box for each of my 53 years alive, but I ran out of wood, money and time. It does what I wanted it to do, throws us into a childlike pose. I went back to my own birth records to find out how big I was when I was born. I’ve been living with this (sculpture) for five years and it still remains terribly mysterious to me.”

One medium Woodward has been working with recently is the bark of trees found in the woods surrounding his studio and home. He has also been working on a smaller scale, creating “Inside Out” pieces where he turns the wood and bark of trees, mostly birch, inside out.

The birch he first collected came with mushrooms on it, so he replicated the mushrooms with pages from dictionaries. Woodward chose to use dictionaries, as opposed to other books because, “dictionaries are the epitome of what we do; we name things. It’s our language, literally A to Z,” he explained.

“My work is loaded with my emotions, my loves and my sorrows,” Woodward said. “I’ve cobbled a career together; you can’t really call it a career because there is no model, but it’s been terribly interesting.”

To learn more about Steven Woodward and his art, visit stevenwoodward.com.