Over the past several years I have met most of the artisan cheesemakers here in Wisconsin. They are truly a unique group of individuals that bring an artistry and skill set that set them apart in fast expanding world of artisan cheese. One of the truly unique cheesemakers I have gotten to know is Willi Lehner of Blue Mont Dairy in Blue Mounds, approximately 40 miles southwest of Madison. 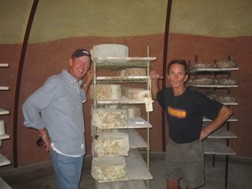 Willi’s introduction to cheese was working along side his father at a small cheese plant in Mt. Horeb. His father learned the art of cheesemaking in his native Switzerland, and immigrated to the U.S. in the late 1940s. He became the manager and head cheesemaker at Rysers Cheese Factory located in downtown Mt. Horeb. Willi spent many hours working along side his dad, mostly doing the cleaning and other back breaking work that goes into cheesemaking.

Willi is often called the “renegade” cheesemaker of Wisconsin, and everybody in the industry throughout the U.S., knows who he is. Most of what Willi does is just a little bit different than so many other artisan cheesemakers. He doesn’t have a dairy farm with a herd of cows, but rather shops for the very best milk that suits the type of cheese he wants to make. He does not have a cheese factory, instead he rents a top line cheese plant for the time it will take him to make a batch of his cheese. After the cheese, or cheeses, he makes are ready to be transported, he takes them to his underground cheese cave at his farm. Willi built the cave by burrowing into a hillside, and essentially built an underground Quonset hut, using reinforced concrete. The exterior entry to the cave was built out of straw bales and stucco. It is here in the multi room cave that Willi ages his very special cheeses.

Willi tells us a little about his take on cheesemaking: “Mass produced cheese is meant to taste consistent each and every single time, every single batch. There is no variation and there is not supposed to be. But a small cheesemaker, like a wine maker, will never make the same cheese twice. There are so many variables just in the milk itself – the type of milk, the breed of the cow, what season and therefore what grass was growing in the field, the time the cheese is aged, even what cheeses are aging nearby as they can develop and attract different spores. Every single variation changes the flavor ever so slightly. Basically, it is a calculated crapshoot. You control the external conditions and hope for the best. Over time, you figure it all out.”

In spite of the “Rock Star” status, Willi is just a really good guy, and someone I feel lucky to call a friend. He will be visiting Door County very soon and I am hoping that he might return to the Savory Spoon Cooking School for a special “Meet the Cheesemaker” event. Check out schoolhouseartisancheese.com for details. In the meantime, you can find Willi at the Madison Farmers Market every Saturday, and you can find his fantastic cheese at our shop in Egg Harbor.