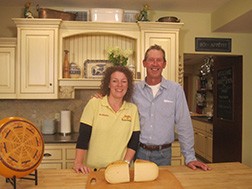 I recently attended the annual American Cheese Society conference in Providence, Rhode Island. This organization holds an annual conference and competition for its members of the specialty and artisan cheese community. Every year this event travels to a different city in North America for educational and networking opportunities along with the judging competition. Two years ago the conference was held in Madison, and next year it will be held in Des Moines, Iowa.

This year there were 1,779 cheeses, butters, and yogurts, broken into 70-plus categories that were entered in the judging competition. There were 267 companies from 31 states and three Canadian providences, ranging in size from small dairies to much larger nationally recognized companies, entered in this year’s competition.

The awards ceremony is like the Oscars of cheese making, a gala event where all the winners are announced. For many of the cheese makers that entered a cheese or cheeses in this prestigious competition it is a life-changing event. The hard work, creativity and investment they put forward can turn into instant business when they win a ribbon. Why? Because now the top-line cheese shops and national cheese retailers are calling them to place orders the next day.

It has been fun for me to be a part of this (the world of artisan cheese) for the past six or seven years, and I love to sit at the awards ceremony with a group of Wisconsin cheese makers, many of whom I know personally. They are all on the edge of their seats hoping their name is called. This year I sat behind Debbie and Beth Crave of Crave Brothers Farmstead Cheese in Waterloo, and next to Bruce Workman of Edelweiss Creamery in Monticello. The first category announced was “Cheese Curds” and the Craves won a blue ribbon, the first of five ribbons they won that night. Let the party begin!

As one might expect, Wisconsin won the most ribbons of any state (99), followed by California with 47, and Vermont with 44. The leading winners from Wisconsin were: Brenda Jensen, Hidden Springs Creamery (sheep milk cheeses) in Westby with nine ribbons; Klondike Cheese Co. in Monroe with eight ribbons; Sartori Cheese in Plymouth, Hook’s Cheese Company in Mineral Point and Crave Brothers Farmstead Cheese in Waterloo with five each. My good friend, Marieke Penterman of Holland’s Family Cheese in Thorp, swept the “International Style Cheese with Flavor” ribbons for her Gouda Foenegreek, Gouda Cumin, and Gouda Jalape?o. Overall it was a night of good fun and some very happy cheese makers.

Saturday night the “Festival of Cheese” took place. If there were ever a chance to overindulge in the consumption of cheese, this would be the time and place. All 1,700-plus cheeses are on display, arranged on tables by category: cheddars, soft ripened, blues, etc. Each table may have as many as 70 cheeses, and the overall challenge is to try and limit the number of cheeses you try, otherwise you may explode into a giant cheese ball.

I entered this ballroom of goodness with a well thought-out plan: start with the milder/fresh cheeses and only eat the ones that won a ribbon in that category – blue ribbon is first, red is second, and white is third. Although I always try to stick to my plan, it often goes haywire in a hurry. I start off just fine then I see a cheese that I have heard about, or one that looks really good, and I immediately stray off course. At that point I throw in the white towel, give up on my plan, and grab a beer to help cleanse the palate, and continue my journey through cheese heaven. It is very easy to lose track of just how many cheeses you ate, you just try and remember the ones that you really like.

The ever expanding world of artisan cheese continues to draw me in, deeper each day. I feel that we are very fortunate to be living in an area where so many fantastic cheeses are produced. My suggestion is to step outside your comfort zone and try some of the great cheeses made right here in Wisconsin. You will be glad you did.

To see a complete list of this year’s winners, visit cheesesociety.org.