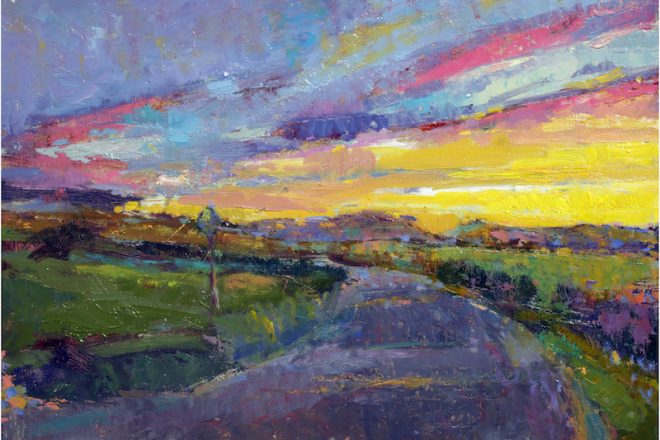 “Sunset on My Walk” by Paula Swaydan-Grebel.

The subtitle for The Hardy Gallery’s new Contemporary Landscape exhibit – Colorist, Formalist, Tonalist – hints that this is not traditional work.

This exhibition showcases the work of Rodger Bechtold, Paula Swaydan-Grebel and Brian Sindler, whose approach to landscapes are, as the subtitle suggests, influenced by colorist, formalist and tonalist methods. Craig Blietz, a nationally known painter who lives in Sister Bay, curated the exhibit.

The show has been well designed. The relatively short interior display walls, while looking a little crowded when two large Sindler pieces sit side by side, more often provide an intriguing juxtaposition of very different styles because visitors can look past one display wall and see contrasting work on a wall beyond or adjacent.

Sarah Zamecnik, the Hardy’s executive director, said she and her assistant, Nicki Shockz, hung the show with assistance from volunteers who have helped to install several exhibits during recent years: Mary Prindiville, Sherry Verhein and Phoebe Howard.

“Nature lends the artist a prismatic theater of color that can be sampled, manipulated and transformed through personal interpretation,” writes Blietz.

Bechtold, who paints in bursts of intense color, meets Blietz head on.

“Nature is the only abstraction,” Bechtold said. “If you want to work in that vein, there is a lot to be learned from nature. I am manipulating inspiration from nature into maybe a little something else. I use that natural scene as a stepping-off point for other painting problems.”

Bechtold exaggerates color and sometimes invents it entirely. He uses the things in nature and how they break up the space in a painting, how the horizon looks, how the land feels, how the branches of a tree grow. “I am trying to be a landscape painter, minimalist and abstract from nature,” he said.

Bechtold went from working in commercial art illustration to becoming a nationally known watercolor painter, then shifted to work in oil during the 1980s – a transition that was more difficult than he had expected.

“Watercolor kind of moves itself and has its own mind,” Bechtold said. “Oil paint doesn’t move unless you move it.” But he has no regrets.

“I think oil has a sensuality and color saturation I couldn’t achieve with watercolor.”

Bechtold likes to paint big, and he likes paintings that can involve the viewer and let them into the space – a 36-inch-by-52-inch landscape, for example, can start doing that. He also creates smaller plein air works, but they are more of a window to nature, rather an entrance that lets the viewer in.

“I like landscape because I think it fits in most people’s homes, and I want people to live with art and have it be a part of their life,” Bechtold said. “Maybe looking at landscapes, they can kind of marry themselves back to nature – and that’s especially important at a time like this when we need to reverse our course as a planet and appreciate what we have here. Producing works of landscape that people enjoy is a good thing.”

Swaydan-Grebel has a keen interest in art history, citing books on Braque and Courbet that had just caught her eye at a bookstore.

“I look back at the history, and there are a few artists I admire,” she said. “One is Stanley Lewis. I took a workshop with him, and he sat down and spent so much time. Just listening to his thought processes – I don’t want to paint like anybody else, but it is so exciting how people make paintings. The way he thinks about going about a painting: He told me to draw everything you see, where nowadays it is edit, edit, edit.”

Lewis talks about Watteau as a great designer, Swaydan-Grebel said, about artists who draw what they see: perceptual artists. When she looks at their work, she is drawn in – to the mystery, to the stories.

“You can walk into their painting and move around it, and there’s a purpose for everything that’s put there,” she said.

“He takes space and does what Stanley is talking about,” Swaydan-Grebel said. “You look at the background or foreground, and you see objects or the negative space – the space between objects becomes a third object.”

With her interests in art, she tries to be eclectic. She studied Bruegel the Elder, for instance, primarily because she said she “didn’t get him.” Now she thinks he’s one of the great landscape painters in the world.

Sindler, who has participated in several Door County Plein Air Festivals, prepared designs for his paintings ahead of time, completing about 100 drawings before the festival even started. He wanted to set the designs in advance.

“I think design is a huge part of a successful painting,” he said. “If the armature isn’t good, then you’ve got an uphill battle to make a painting, and it usually means redesigning as you go along.”

Sindler began painting in a style called tonalism around 2004. Such works involve tight values, are usually quite dark, and incorporate paint applied in thin layers.

“I like that kind of real compact, tight values where you have a small value range and not a tremendous amount of contrast,” he said. “It’s an aesthetic I enjoy. I am stronger in the low-light, low-contrast kind of painting than painting with bright contrasts.”

Creating bright paintings requires an artist to saturate the colors more, but one of the things Sindler enjoys most is making paint mixtures that are so subtle that adding even a bit of color can shift the hue. He also readily admits that his work is not for everyone.

“I have a collector base that is deep, but not super wide. People who own my paintings tend to own several of them – some have as many as 13 or 17. Then again, a lot of people appreciate it but don’t want it in their home.”Contemporary Landscape: Colorist, Formalist, Tonalist will be on display at The Hardy Gallery (thehardy.org), 3083 Anderson Lane in Ephraim, until Oct. 10.