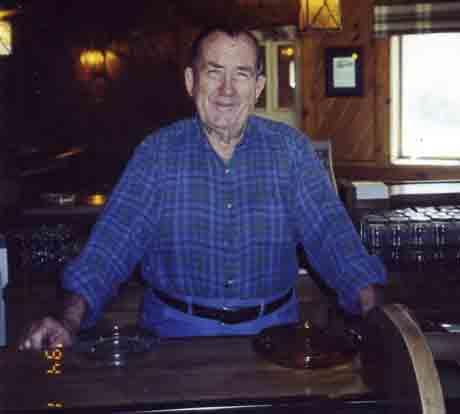 Earl Willems behind the bar he loved at the Sister Bay Bowl.

When I heard the news that Earl Willems had passed away last week, a wave of sadness showered over me. Then I did what we do to comfort ourselves in such moments, telling myself it wasn’t so sad, that his 87 years constituted a pretty good life.

But later in the day, I thought of how many dozens of phone calls must have been made already that morning. Phone calls in which people heard the news, “Earl Willems died last night,” and felt their heart sink just a bit as mine did. Thing is, I barely knew him.

I began working at the Sister Bay Bowl long after Earl and his wife Rita had passed its operations on to their four children, so I never experienced the days when “Earl the Pearl” was the Bowl. But it didn’t take long to grasp what he meant to the place.

As the soggy spring days passed, customers would ask in earnest when Earl and Rita were coming home from Florida, and by April a new update would come every couple days. When they finally made it home I would soon find out what the family meant when they laughed about his penchant for buying rounds for the whole place. It was probably the one way his presence wasn’t great for the till.

His arrival through the bowling alley door with Rita never failed to spark a conversation and a smile, whether it was with a member of his large family, or his even larger family of friends. And it wasn’t long before he was telling me to catch everyone a drink.

There was no way he and Rita could possibly have recognized everyone who blurted hellos from across the bar or stopped by to strike up a conversation with them each evening, but they all earned one on him.

In his later years his desire to step behind the bar never waned, even though he didn’t quite know his way around anymore. When he sat on the stool at the well-worn bubble every long-time Bowl customer seeks with a jealous eye, I sensed a strong stab of resignation in him, as if he was uncomfortable on that side of the bar, ordering rather than dispensing the rounds, watching someone else hold court.

The best nights were the slow ones, when a young guy like myself could chat him up a little bit, get him going and just listen. He spoke fondly of the old days, of starting out in the business, and of a Sister Bay I never knew. He spoke of nights when the bar was filled with his friends, all dancing to the Birminghams.

“Oh you wouldn’t believe it,” he would say, waving his hand and shaking his head. Then he’d look off for a moment, as though lost in a memory. When the place was especially busy in recent years I’d arrive for my shift to find Earl directing parking lot traffic, making sure every last customer would fit. On those nights he would often stop in to take a look, standing silently by the bowling alley door. Rushing past him to grab another bucket of ice, you could see a smile of pride spread across his face before he turned to head back to Rita in the house next door.

He was one of Northern Door’s old guard. One of the men, like Bill Bastian, Al Johnson, Clyde Casperson, George Erickson, and many significant others that wrote the story of the village in work, stone, and receipts. That group of men who sat on the boards, started the festivals, opened for business, and in the tough times of the village, ushered the funerals of lives lost too soon. Fortunately, Earl’s was not one of them, for Sister Bay would not be the same had he and Rita not bought the Sister Bay Hotel from his father in 1950 and installed a six-lane bowling alley. That fortuitous turn would spawn generations of memories, with generations more to come. But no more with Sister Bay’s beloved Belgian.

Earl, we miss you already.