When Susan* walked away from her last radiation treatment, she was confronted with a new question.

How do you live after cancer?

“You look at life differently,” Susan said. “So now it’s a matter of finding that ‘new normal.’” 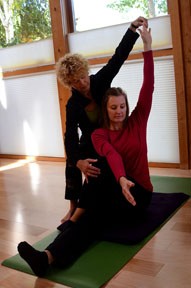 Susan was diagnosed with cancer last year after an MRI showed it growing in her right breast. She hadn’t felt any lumps or seen a mass on a mammogram reading, but thought an MRI scan of her healthy body would be helpful in case disease appeared in the future.

She didn’t expect the scan to find cancer but was lucky to catch the disease before it had reached her lymph nodes – where it can spread throughout the body. She underwent seven weeks of radiation therapy, almost daily sessions of contorting her body so a beam of radiation could find the most direct path to kill the cancer in her breast.

Seven weeks and over 30 treatments later, Susan’s disease became secondary to finding her life’s next step.

The Healing Project is a collaboration between MDCMC and the Community Clinic of Door County. It’s paid for through the Cancer Healing Fund, a pool of money raised through donations and local business fundraisers.

“Integrative therapies can certainly be of comfort while [patients] are taking the traditional western model of chemotherapy and radiation to alleviate side effects and symptoms,” said Jennelle Berg, coordinator of The Healing Project. 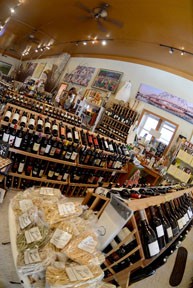 Dede McCartney of Madison Avenue Wine Shop donated to local cancer patients prior to the formation of The Healing Project in 2011, and she – along with many other Sturgeon Bay businesses – will donate at least 10 percent of their profits on Oct. 13 to the Cancer Healing Fund. Photo by Katie Sikora.

An acupuncture treatment helped Susan deal with a side effect of radiation therapy – the “hot flashes from hell” – but it was the Healing Touch sessions that have helped her heal the emotional and spiritual damage caused by cancer.

“After she was done I just felt so at peace,” Susan said. “It was really amazing.”

It’s an abstract concept in the cancer treatment world, which usually focuses on chemotherapy, radiation and other drugs. But according to Susan, it works.

Last year Susan experienced terrible back pain, the kind that keeps you from enjoying a vacation or even getting out of bed. Trips to the chiropractor helped dull the pain but didn’t take it away completely.

Berg sensed something in Susan’s back. Then, an MRI found a non-cancerous mass that had been causing the pain.

“She was actually sensing something there before I had an MRI that found it,” Susan said.

Alternative healing therapies – even mainstream ones like massage therapy – are rarely covered by insurance policies, and after co-pays and deductibles from cancer treatments add up, paying for them is a stretch. That’s one reason the free therapies through The Healing Touch have made such a difference to Susan.

“I’m a firm believer in alternative therapies; but my budget doesn’t allow it, and my insurance doesn’t think twice about saying no,” she said.

The community is reaching out to help fund these programs for Door County cancer patients. On October 13, over 30 Sturgeon Bay businesses will donate 10 percent of the day’s sales to the Cancer Healing Fund.

Although the money raised will go to benefit The Healing Project, the October fundraiser began before the project was created. It all started years ago with a jar at Madison Avenue Wine Shop, where owner Dede McCartney collected money for local causes.

“As opposed to just every year giving out a bunch of pink stuff in October, we decided we wanted to raise money for breast cancer research,” Fischer said.

As the years passed, the fund grew and more local lives were touched by breast cancer. Fischer and McCartney decided to focus the money locally. Fischer realized that cancer patients needed someone to talk to about the disease and started thinking of ways to address that need.

Then, in 2011 after Fischer left MDCMC, the fund was directed toward more types of alternative therapies and The Healing Project was born.

“I think this project gives a voice to all of those other needs that cancer patients have that are not necessarily addressed by traditional therapies and traditional medicine,” Fischer said.

Because when the radiation and chemotherapy come to an end, there’s still that question that goes beyond the patient’s physical body to her emotions, her mind and her spirit. What next?

“It’s a life of wellness,” Susan said. “You’re just trying to be as well as you can be to move forward.”

*Name changed at request of source.