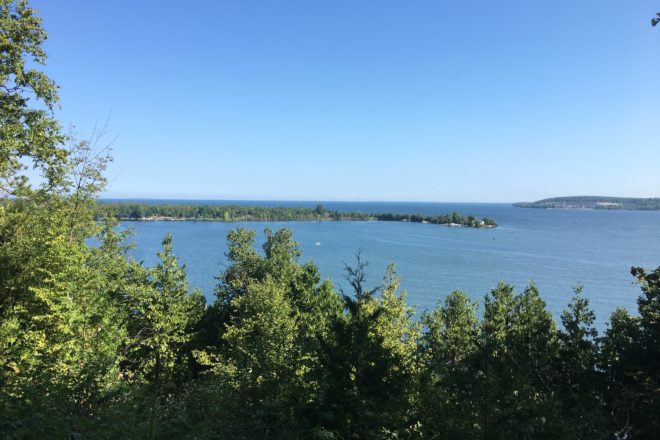 Today, I went on a journey. From Ephraim, I drove the 54 minutes to Potawatomi State Park in Sturgeon Bay to participate in a guided hike for one of their Naturalist Programs. The goal for the day was to hike the park’s section of the Ice Age Trail in celebration of its 60th anniversary, a 2.8 mile trek, one way, from the top at Old Ski Hill Overlook to the end.

Alas, I was the only one who showed up.

The trail guide was nice enough to wait it out a few minutes, chat with me about our lives in Door County and finally provide information he knew about the trail. He offered an email for any further questions and suggested I start on the trail nearer the water for good views.

The Ice Age Trail is one of 11 National Scenic Trails (how did Wisco get so lucky?), following a landscape that was sculpted by glaciers. It spans nearly 1,200 miles and is entirely held within Wisconsin, Door County housing its Eastern Terminus.

I had hiked part of the trail before at Kettle Moraine State Forest near Plymouth. I’m from Sheboygan Falls, so I spent lots of time hiking in the Kettles. They feel like home to me, so I was excited to try a new part of the trail.

So, I began the hike alone. Below you will find the inner monologue of a solo hiker (if you can call me that for the maybe two-ish miles I hiked).

My first thought was that the trail did indeed feel familiar – it was rocky and rooty and well worn. The expanse of water was new, as was the general surrounding scenery. There were lots of mossy rocks and even a natural staircase (that probably wasn’t even natural).

I listened to music off of a playlist that I started making when I first got to Door County. The 428 songs on it made me feel nostalgic for the memories I had made and I hadn’t even left yet.

Wait a second, this forest is probably haunted. Aren’t they all?

I took my headphones out so I could hear any assailants that might come upon me, human or otherwise. I told myself it was to listen to the sounds of nature. There was a lot to hear anyway – insects, birds and the waves.

I didn’t see much wildlife, except for a red cardinal and the smallest, cutest, fuzziest little black caterpillar on the sidewalk. It was a woolly bear caterpillar, and apparently since he was all black and lacking that orange band, it means we’re supposed to have a severe winter. I’m going to tell myself he was just young.

There was a point where my good sense of direction was deceived by having to cross a road to follow the trail into a park area. I felt that couldn’t be right, but it was. Walking through the park area, I silently cursed myself for not packing a picnic lunch. The views of the bay were amazing.

The trail disappeared once more into the trees, which I was grateful for. I kind of liked that isolated feeling of being surrounded by the woods. It was quiet in those sections. I heard a literal leaf fall from above. I didn’t even know that had a sound.

Eventually I made it back to my car. I was sweating from the flannel I was wearing, because everyone knows if you didn’t wear flannel, did you really go on a hike?

I reflected on my adventure. I slightly regretted not starting at the very top of the trail. I imagine it might have been a difficult trek down, plus I would have hiked longer if I hadn’t reached the edge of the park. The part I hiked was pretty easy, and my Chacos saw enough to have deserved more. But as was customary, I still tripped over about 12 rocks and walked through around 56 webs. But I didn’t care. It was a good start to the day. I love being in nature, plus I made friends with a caterpillar.