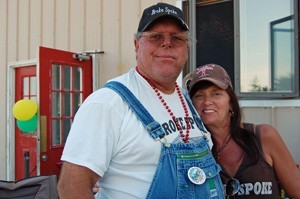 Stevie and Mabel Haas of the Broke Spoke in Kiln, Miss., put on a Gulf Coast shrimp boil on Aug. 17 at Beantown Campground for the Door County volunteers who helped families in Hancock County, Miss., after Hurricane Katrina hit them hard.

A gathering over a shrimp boil at Beantown Campground in Baileys Harbor on Aug. 17 further cemented a relationship between residents of Door County and residents of Kiln, Miss., that dates back to the 1990s, when a certain Kiln resident was a dominating force in football as quarterback of the Green Bay Packers.

“We were able to help 55 families back into their homes in 25 trips, and every one of those trips, Stevie cooked for us,” D’Amico said, referring to Stevie Haas, owner of the Broke Spoke (“official biker bar of the NFL”) in Kiln.

On this night, Stevie was cooking again with some of the 150 pounds of fresh Gulf Coast shrimp he and others from Kiln brought up to share with their Door County friends.

“I met Pete years ago, ’97, ’98, when he had the Tundra House in Jacksonport,” Haas said. “They used to call us up every week at halftime during the game and he’d pass out shots to their customers and we’d pass out moonshine shots to our customers. We’d hoot and holler over the speaker phone. We’d do that for years and years. He’d come down to see us and we’d come up to see him. This has been going on for a long time. It’s a real good connection. I’ve met so many people from up here it’s unreal.”

One of the other Kiln residents who was at the shrimp boil had his home rebuilt by the Door County crew.

“Through Stevie, I met Pete and all the others,” said Donald “Smiley” Simmons, a water company employee in Kiln. “When they come down and started volunteering, they did way extra. They brought a lot to our town. Every time they’d come down with a new load and new people, we don’t meet strangers in our town. We just meet new friends. They would come down, work in the heat and stay in tents. A lot of great people come down and worked for us for nothin’. Ten, 12 hours a day in the burnin’ up heat. I still tear up thinking about it.”

Simmons said he wouldn’t have missed this opportunity “for the world.”

“They brought a lot to us. They did so much for us, plus we enjoy doing this. We do this all the time at our house,” he said. “Plus, we get a chance to come to Wisconsin and get out of the 100 degree heat and 100 percent humidity! Oh, man, I wish I could put some of that in the ice chest and haul it home with us!”

Everyone in attendance agreed that the friendship will continue.

“They’re all just blue collar, like everyone up here,” D’Amico said. “The connection with us was Brett Favre, but the people in south Mississippi are just like the people in northeast Wisconsin.”