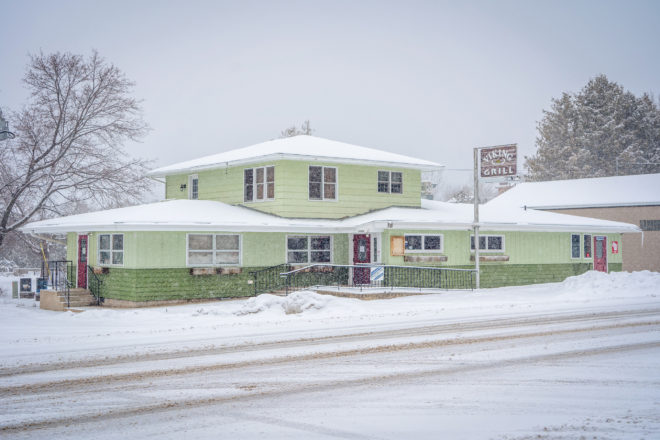 The owners of the Blue Bear Bakery in Racine purchased the Viking Grill in Ellison Bay on Feb. 17. Photo by Rachel Lukas.

The Viking Grill was the definition of old school. After eight decades of serving the hungry at the northern tip of the peninsula, what else could it be?

But that will change this year as longtime boilmaster and donut baker Dan Peterson is filing his retirement papers and has sold the restaurant to the owners of the acclaimed Blue Bear Cafe in Racine.

Peterson bought the restaurant in 1984 after spending 25 years learning the restaurant trade in the kitchen at Al Johnson’s Swedish Restaurant in Sister Bay. By that time, the Viking was already well broken in – first by the Wickmans, the family that opened it in 1939 and ran it until 1974; and then guided by Phil Voight for a decade.

The fish boil was its claim to fame, first served in 1961, but it was also known as a place for hearty plates of corned beef hash, eggs Benedict and Swedish pancakes. In both menu and atmosphere, perhaps only the Morning Glory in Sturgeon Bay compares.

The Viking was often a stop on this writer’s paper route – a stop I approached with a mixture of joy and trepidation. You didn’t stop by the Viking without a thick skin, braced for the jabs from the meeting of the minds at the morning coffee klatch or a crack from Wendy or Tassie behind the counter. This was one of the last vestiges of what long-timers like to say Door County used to be: a tiny town without airs.

That’s when the morning men’s coffee klatch would begin pulling up stools to shoot the breeze, trade barbs and keep tabs on the bustling metropolis of Ellison Bay.

“The smartest people in the world,” as Peterson described his friends. One of them was Gordie Rush, who had his own chair. “He was at the Viking before I was,” Peterson said, “and he was there the last day we closed.”

This wasn’t a coffee shop where people asked about the roast, said Peterson’s wife and longtime partner at the Viking, Wendy Smith.

“Some of them didn’t even drink coffee; they were just there for the bull,” she said.

When the producers of the film Feed the Fish were looking for a restaurant with a small-town feel to shoot scenes for the 2010 movie starring Tony Shalhoub and Katie Aselton, it was not surprising they landed at the Viking.

There was a time when, if you grew up in Ellison Bay, odds were good that you would work at the Viking at one time or another, usually starting at age 11 or 12 by clearing tables and washing dishes before working your way up through the kitchen.

“It was a great job, and I think of all the parents and all the kids we had work there, and it’s special,” Smith said.

But those kids have become harder and harder to come by. In fact, just a warm body has been hard to come by of late – a phenomenon that pushed the Viking staff to the brink last year as it did all over the peninsula.

“Last year we were down to about 10 employees,” Smith said.

“We all had to work a little harder, as everyone did in the county,” Peterson said. “I always got there at 5 or 5:30 to make my donuts, and I like to say I took my first day off on Nov. 1. There just were no people to work.”

But in spite of the grind, Peterson still loved the work, still loved the people. When he took over the Viking, the restaurant served – or, more accurately, performed – five fish boils a week, serving 250-300 diners a night. Peterson became the granddaddy of Door County boilmasters, a skill he passed on to his son Matthew Peterson, who now performs boils at Pelletier’s in Fish Creek. Peterson also took the show on the road, doing fish boils across the state, in Illinois and in the Dakotas as an ambassador for a Door County trademark.

Peterson loved his role, talking to customers and telling Door County tales while a couple of kettles boiled fish. As the years went by, he came to especially enjoy new generations stopping in.

For years, the Viking thrived on business from bus tours, welcoming as many as 170 buses in a single year. That flow is now just a trickle as the nature of travel has changed, but business was still booming last year, when Smith said they did numbers they hadn’t seen since the 1990s with just a fraction of the staff.

The new owners, Joseph and Tesa Schulte, did not respond to a request for comment, but Peterson said he is told the property will remain a restaurant with substantial changes. Blue Bear serves breakfast, lunch and dinner in addition to bakery items and barbeque, and it also features gluten-free and keto options.

Peterson and Smith are in Florida for the winter and were not in Ellison Bay for the Feb. 17 closing.

“When we got the call that it sold, it kind of hurt me – it did,” Peterson said. “I feel bad. But you know, I’m 83. I’ve worked hard my whole life. I know every corner in that building and the back building and the garages and the coolers.”