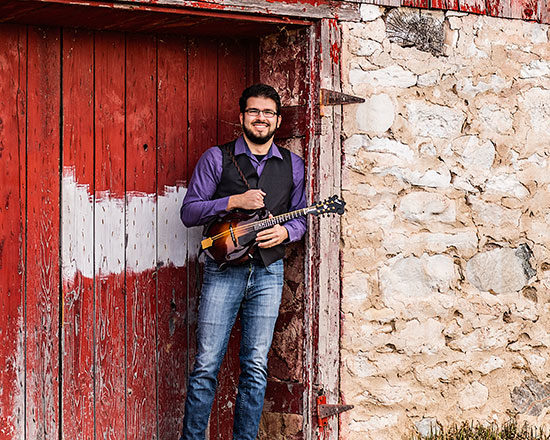 In a musical genre built on tales of loneliness, loves lost and the pain of change, it makes sense that, despite its successes, the bluegrass band Special Consensus would pen the title track of its 18th album, Long I Ride, to lament the fruitless efforts of a musical life on the road.

The irony wasn’t lost on the band’s fans. Long I Ride was recorded in celebration of the band’s 40th anniversary and on the heels of its Grammy-nominated album, Scratch Gravel Road.

In hindsight, that irony may be strongest for one particular member of the band: mandolin player and Sturgeon Bay resident Nick Dumas, whose first album as a member of the Chicago-based foursome was Long I Ride. A reflection on his three years with the band counters the chorus, “It’s long I ride for the little I gain.”

Those long miles traveled by van, plane and cruise ship have gained the 28-year-old musician fame in the bluegrass world, a Grammy nomination and the love of a Door County woman who, this summer, will become his wife.

Despite the speed at which he hit his musical milestones — being hired by Special Consensus in 2015, recording albums with the group in 2016 and 2018, walking the Grammy’s red carpet in 2019, all while traveling 200 days a year — Dumas exudes an ease and enthusiasm for full-time touring life.

“It’s surreal to me,” he said. “You get into these zones, and everything turns into the normal routine on the road — drive, sleep, play the show and have some fun, hang out with folks and promoters — but there are some times when I’m standing on stage and it just kind of hits me: ‘Whoa. I’m standing on stage with Special C right now. This is crazy.’”

Dumas’s accelerated path to bluegrass stardom was born from humble beginnings. The Brier, Washington, native grew up playing the fiddle in his family band, The Three Generations, before picking up the mandolin, guitar and banjo and co-founding two popular Pacific Northwest touring bands: Northern Departure and North Country Bluegrass. It was through a North Country bandmate that Dumas was introduced to Rick Faris, the current guitarist and former mandolin player for Special Consensus.

Until that point, Dumas had been a starry-eyed fan of the group.

“They’ve been one of my favorite bands for most of my musical life, and they had a lot of my heroes go through the band,” Dumas said. “The band has just had a drive about them. Their vocals have always been great, just hard driving and a really tight band. … I always enjoyed watching them — so much energy on stage, and I always loved it. Every time they came to town, I was there.”

The two bands often traveled the same festival circuit, which naturally culminated in jam sessions after their sets. Dumas’s command of the mandolin, coupled with his easygoing nature, left an impression on Special Consensus co-founder and the banjo player Greg Cahill. It was a chance meeting at an International Bluegrass Music Association conference in 2015 that eventually led Cahill to offer Dumas a job.

“Their guitar player at the time announced he was leaving the band, so I thought, ‘Shoot, they’re going to be looking for a new guitar player,’” Dumas said. “I actually had a buddy of mine I was going to try to get them to try out on the guitar, so I go in and talk to Rick [Faris], and he told me, ‘Well, we might actually be looking for a mandolin player because I’m probably going to switch over to guitar.’ He looks over at me all wide-eyed, and I’m like, ‘Oh. Well. That escalated quickly.’”

Within weeks, Dumas was on the roster of Special Consensus, harmonizing with Faris, Cahill and bassist Dan Eubanks.

“He likes the music we were playing and helped us grow that, and there’s space for him to contribute into this band and grow as well,” Cahill said. “He just slipped right into the band very well.”

Dumas was living in Jonesborough, Tennessee, at the time — 600 miles from the band’s home base in Chicago. On his second gig with the group — at the White Gull Inn’s winter folk-concert series — Dumas met Hana Rass, who is now his fiancée. Rass is a well-regarded musician in her own right, best known regionally as the fiddler for her family’s Fairland Bluegrass Band.

Rass had been a longtime fan of Special Consensus, traveling to the group’s sold-out White Gull Inn shows every winter. Over time, she and Dumas bonded over their shared love of bluegrass music, even finding themselves at the same bluegrass conference in Nashville just weeks after they met.

Rass has been along for the ride ever since. She has joined Dumas and Special Consensus for shows in the Midwest and abroad. (The couple got engaged during the band’s tour in Ireland, England and Wales — a tour it has done every other year since 1993.) She also called Dumas’s mom in Washington (where he was visiting his family) last fall and directed her to jump on Dumas’s bed to wake him with the news that Special Consensus had been nominated for a Grammy Award. Locally, she’s written press releases lauding Dumas’s success and touting his talents.

“I have never met someone so humble,” Rass said. “Obviously he’s an entertainer, so he does like the spotlight, but at the same time, he doesn’t. He doesn’t want to make it a big deal.”

It wasn’t difficult for Dumas to fit in with the musical Rass family. Within a short time of meeting Hana’s father, Dan, Dumas and Dan Rass were playing music together. Now the two couples co-own The Fiddler’s Farm, a late-1800s barn in Sturgeon Bay that they’ve restored to create a music and wedding venue.

Dumas and the Rasses form the house band for the venue, which this summer will host the second season of its classic country, bluegrass and swing concert series, and in July, the nuptials of Hana Rass and Nick Dumas. Eventually they hope to add a music-lesson program to the venue to introduce people of all ages to bluegrass.

The farmhouse on the property of The Fiddler’s Farm where Hana and Nick live has become Dumas’s respite from the long miles involved in entertaining bluegrass fans at venues and festivals across America.

“The road can be very tiring,” Dumas said. “It’s the getting there that can be kind of a drag, but once you’re there playing on stage and hanging out at a festival, it’s worth all of the miles that we put behind us.”

Catch Grammy-award winning Special Consensus at Door Community Auditorium on Oct. 21, when they open for the variety show Manitowoc Minute. To read more about Special Consensus, visit specialc.com. To learn about The Fiddler’s Farm, visit thefiddlersfarm.com.