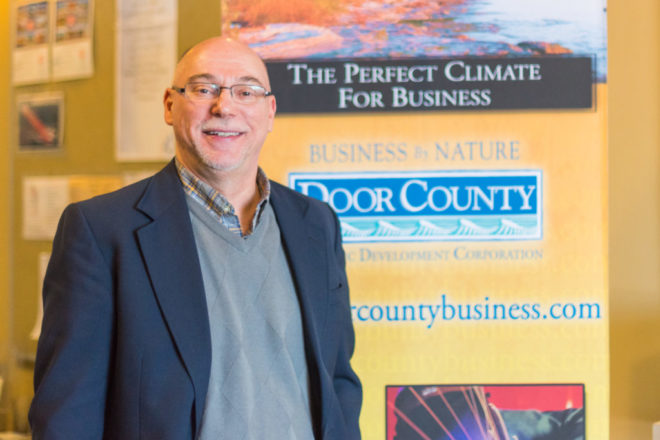 Made in Door County

If you wanted to know where Door County’s 65 manufacturers were located, you’d need to look up and down the peninsula to find them all. Yet it’s also true that a majority of them are located at the Sturgeon Bay Industrial Park at 185 E. Walnut St., where all but six of the 56 lots are occupied (see the accompanying map).

Today, the City of Sturgeon Bay and the Door County Economic Development Corporation (DCEDC) work in tandem to keep the park growing, full and thriving. But back when it started, it was just a chunk of land and the dream of a completely different entity to grow a new economic sector.

“The Door County Industrial Development Corporation was a for-profit stock corporation formed in the 1950s, and they worked closely with the city to start the industrial park,” Bill Chaudoir said. “The city bought and improved the land, and the corporation would market and negotiate sales to get tenants in there.”

Chaudoir is a Southern Door native who returned to the county in 1980 after college and a first job in Missouri to work for the County of Door’s planning department as an urban planner.

“At that time, the city was growing, and they needed help, so they created that position,” he said.

One of his last projects was working with Wally Blevins, a former Door County Chamber of Commerce director, on what to do about industrial decline as Bay Shipbuilding’s workforce dwindled from 1,000 workers to a couple hundred. They realized they needed to diversify, so the county created an economic-development task force to figure out how to promote the county’s economy.

“It was mostly tourism-based board members,” Chaudoir said, putting Blevins “in kind of a pickle. So he strongly supported the DCEDC.”

The industrial for-profit was terminated, and the nonprofit DCEDC was created in its place. The year was 1989, and Chaudoir became its first executive director. He’d remain in the position for the next 27 years, retiring in 2016.

The industrial park had gotten its start under the former corporation before Highways 42/57 went through the city. Walnut Street was the main road; Neenah Avenue didn’t go all the way through; and Charlotte Road was the connection.

“When they built 42/57, there was a Quonset hut in the way of the highway” that the highway department had to move, Chaudoir said. “That Quonset hut was Therma-Tron-X” – which today has 280,000 square feet of manufacturing space in the industrial park, an additional 35,500 square feet of office space and a nearby subsidiary, TTX Air, that has multiple aircraft to fly employees and clients to and from Door County.

The city had purchased 40 acres of old orchard on the south end of the industrial park, but there was minimal access and no sewer or water. One of Chaudoir’s first scores was to receive a large federal grant that had to be matched by the city – and thus the city’s first Tax Increment Financing District, known as TID 1, was formed. The grant funded sewer and water on Shiloh Street and extended Neenah Avenue and Leeward Street.

During Chaudoir’s time, more grant money was secured, more infrastructural improvements were made and more businesses moved in or expanded their footprints. Yet some things have not changed in more than a decade.

“Manufacturers were saying they didn’t have enough housing for their employees,” Chaudoir said. “I started hearing that in 2010.”