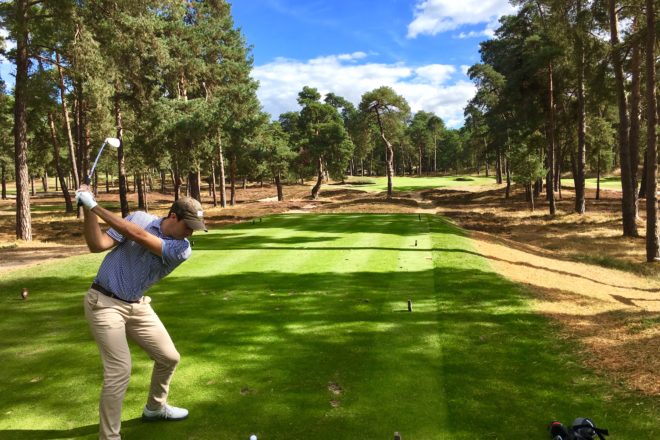 It takes a special coordination of muscles to stand above a stationary ball, swing a long stick, force the correct amount of energy into that tiny sphere with the proper angle to make it fly a specific distance and direction. (Left) The author tees off at Golf de Morfontaine in Mortefontaine, France. Submitted.

It’s one of the perpetual truths I’ve learned covering golf for half a decade. And it’s what makes some of the greatest competitors in other sports — Michael Jordan, Wayne Gretzky, Jerry Rice — go insane for this game. The allure of being better, getting better, beating better is so painfully available and intoxicating in golf. There is always one more putt, one more hole, even one more round if you’re desperate enough.

What golf does to us is a beautifully complex thing. On one hand, there’s the inspiration. Drive. Motivation to improve. On the other, there’s the frustration of stagnancy. You can very easily end up where I am — Bill Murray in my own golfy Groundhog Day — perpetually an 11 handicap.

It’s true. Ten years ago, I was an 11 handicap, washing clubs and chasing my ball around Horseshoe Bay as the sun set. Today I mingle with the best teachers in the game, play the greatest courses in the world and there I am: still an 11 handicap.

Within those 10 years lies a messy path of minor gains and setbacks. Some forward, some reverse. Days when it all makes sense. When that little white Titleist just gets dirtier and dirtier — but in a good way because you haven’t lost it anywhere. And then days when it makes no sense.

Once a year, every year, a breaking point arrives. I swear off the game, perhaps forever. But then golf strikes again. It always will. I hit that one special shot, talk about it afterward, visualize it for a week and use it like a broom to sweep away its many evil siblings. Magic.

No sport does it quite like golf, and it isn’t just me. Imagine how Paul Casey feels. Once touted as one of the best young players from England, the now-41-year-old has played on the PGA Tour for nearly two decades. But earlier this spring, when he played his best in four rounds at Pebble Beach, some 48-year-old chump slides in and steals the trophy from him. That chump was Phil Mickelson, and golf is riddled with people like him. At any level, someone is always just better.

Mickelson and a handful of special players have, for me at least, created a newfound appreciation for the word “talent.” Sure, you always knew talent existed, but few ideas are more difficult to explain. It’s complex, and in golf it’s everywhere. It takes a special coordination of muscles to stand above a stationary ball, swing a long stick, force the correct amount of energy into that tiny sphere with the proper angle to make it fly a specific distance and direction. Add some spin? At your own risk. In basketball, the physics are fun and relatable. Golf physics? Exotic, infuriating and somehow always related to this special thing called talent.

But why does Mickelson have it in buckets while Paul Casey gets it in a pint glass? And I in droplets? It is quite the conundrum. The numbers promise me a single-digit handicap is just a few strokes away. But is it really? Answering that question only brings up others. Why did it go right? How did it hook left? Good luck solving the riddle on your own. Take lessons? Devote yourself to the driving range? Ignore it entirely? How does it feel when the ball does exactly as it’s told? What is that high like?

Questions like that steer the many conversations I have with avid golfers, particularly those who are better than I am. This game can be a Rubik’s Cube at times, where you’re figuring out one part of the game and hazarding another at the same time. Only a few people have figured out the algorithms. I just want them to teach me how.

It was healthy then — or so I figured — when I discussed the game recently with a nongolfer. As if reading from a script, he rattled off every reason why he doesn’t golf. To him, golf is selfish: the money, the time, ignoring family duties and all the rest are all nonsensical commitments. He made many great points. What does he do instead? Mountain biking.

The conversation was enlightening for both of us. I listened intently to his logic; he reaffirmed his own beliefs with each word. It was impossible not to think that while he’s out there climbing the Appalachians on his mountain bike, I’m just pedaling along on Average Avenue, donating money to an expensive hobby.

Perhaps it’s time for a new one. I could take up hiking. Maybe photography. Perhaps reading? That seems most achievable. And there are a lot of great golf books I’ve been avoiding.