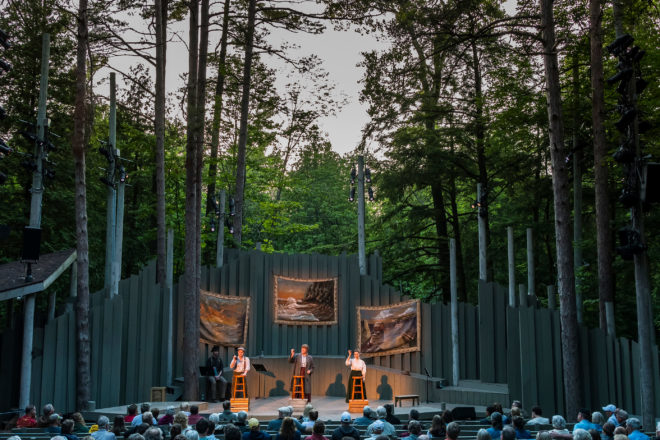 Songs in musical theater are often used as a vehicle for words that might sound inane if they were spoken. Songs move the story forward, develop the characters and demonstrate the evolving relationships among characters.

The music even becomes a character itself – there not only to provide a background or foundation for the acting to build on – but to define the mood as well. The melodies and harmonies subtly tell the audience the emotional place the words are coming from, whether it’s joy, malice, sadness, excitement or some other feeling.

Kelly Doherty, one of the four performers in Northern Sky’s production of The Fisherman’s Daughters, explained the difference between singing and speaking to demonstrate emotion as an actor.

“It can be easier to convey emotion through song than just words because the underlying accompaniment adds so much to the mood of what’s happening – half of your work is done to an extent,” Doherty said. “In musical theater, songs happen when speaking is no longer enough to express it.”

The Fisherman’s Daughters is a fictionalized account of two sisters living on the land that would ultimately become Peninsula State Park. It’s set in 1908, at the time of the park’s creation. In her sixth season with Northern Sky, Doherty plays the somewhat brusque, and ultimately misunderstood, Sarah Peterson.

Now a professional actor and vocalist with years of experience and acclaim, Doherty was told in high school that she didn’t have a great voice and wouldn’t be successful as a singer.

“It [came from] a well-meaning adult in my life who was trying to manage my expectations because I was obsessed with musical theater,” she said. “I do have a very unique voice, and I don’t sound like your traditional musical theater person, so I thought therefore, I shouldn’t be a singer.”

Doherty has a rich, low alto voice, which has prevented her from playing the high-soprano leads that are typical female roles in most shows, but in recent years, her low voice has opened up some roles that are traditionally played by men, which she describes as a fun shift.

“I’ve played male characters in drag, but I did Kiss Me, Kate a couple of years ago, and I played one of the gangsters. I was just a lady gangster, and it was amazing and wonderful,” Doherty said.

Her low voice turned out to be a highly desirable asset in bringing the Sarah Peterson character to life because it matched that of Katie Dahl, who wrote the book (script), music and lyrics.

Dahl is a renowned folk musician, and the music in the show has a distinctly folk sound and structure to it, without much incidental music or the segues that are typically found in musical theater scores. Also a low alto, Dahl described the pleasure of having a female lead who could sing anything she could, and more.

“Kelly’s vocal range is very similar to mine,” Dahl said. “We both have freakishly low voices. It was so easy because, as a person who had never written songs for anyone else to sing until now, I knew that if I could sing it, Kelly could sing it.”

Dahl has released four original studio albums, and she co-wrote the book and lyrics for Victory Farm, which premiered at Northern Sky Theater in 2012. The Fisherman’s Daughters was the first time she had written the music for a show as well.

She sees similarities between the process of hiring session musicians to record her studio albums and handing over the songs she wrote for the show to the cast to bring them to life.

“You have all these thoughts in your own mind before you get into the studio or the rehearsal hall,” Dahl said, “and you envision the way these things will be, and they are so much a product of yourself. Then you get into this place of collaboration, and it’s so determined by the individuals you’re working with. The collaborative nature of it is such a relief after being alone in the process for so long. It’s like having oxygen breathed into it.”

Doherty, in turn, enjoyed the creative freedom Dahl gave everyone who was involved in creating the show.

“There was a lot of freedom when it came to interpretation of the phrasing, even with rhythm and allowing for more back phrasing [purposely singing ahead of or behind the beat] than what was already built in. I also knew that if there was something I did that she didn’t like or that didn’t fit her vision, she would tell me,” Doherty said.

The creative freedom and collaborative nature of the show stretched to the band, in that the musicians received chord charts rather than fully notated parts. This created more of a folk-music environment for the musicians than that of a traditional pit orchestra, which is usually more like a classical orchestra, with little improvisation.

“The musicians would try something and ask us, ‘Will this work for you to get your next entrance?’ and you’d say ‘Yes,’ or you’d say, ‘No, I have no idea where we are in the music!’” Doherty said.

This collaboration among Dahl, Doherty, the rest of the cast, the band and the crew at Northern Sky Theater has created a truly funny, endearing and highly entertaining show to enjoy from the heart of the park that is itself at the heart of the story.

The Peninsula Park stage will host The Fisherman’s Daughters through July 10. Purchase tickets at northernskytheater.com.