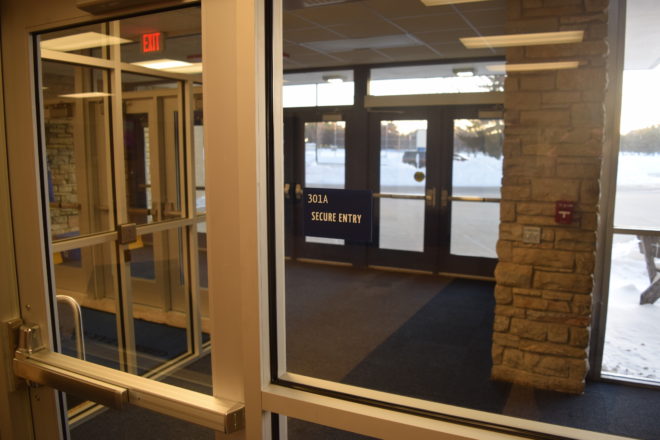 Gibraltar is one of four schools in Door County using or planning to use referendum funding for safety and security precautions. Photo by Solomon Lindenberg.

In 2018, former Wisconsin Attorney General Brad Schimel announced a $100 million school-safety grant to improve mental health, school safety and training for educators and law-enforcement officers. Door County schools did not see a windfall from those grants, but instead have turned to local taxpayers to help improve security.

Pinpointing the exact cost of security upgrades is difficult, but each of the four most recent facilities referenda regarding Door County schools include significant security components.

In January, the Sturgeon Bay School Board voted unanimously to place a question on the April 7 ballot to approve a $16.84 million facilities referendum. With the funding, the school district plans to make the safety and security of the building a major focus. Under the plan, Sturgeon Bay High School would create a secure entrance and control visitor access by relocating the main office.

Sturgeon Bay’s referendum follows major facility upgrades by Gibraltar, Sevastopol and Southern Door High Schools, all of which had safety and security in mind when planning their renovations.

Gibraltar High School recently finished its $4.5 million remodel, which included adding secured entrances and upgrades to the secondary entry and office area. According to Superintendent Tina Van Meer, the cost for these security improvements was approximately $85,000.

“We have remodeled our entrance so that everyone who comes in has to go through the office and have a mandatory check-in,” Van Meer said.

In addition to the entrance remodel, Van Meer said Gibraltar had student and faculty safety in mind when designing the new classrooms and library.

“While our main focus has been to secure the perimeter of the building by finding where intruders would likely try to get in and upgrading surveillance and security doors, we designed the classrooms to have two entrance and exit points so that if an intruder is in the front hallway, a student can go out the back of the classroom and into the library; and if an intruder is in the library, students can exit through the front of the classroom,” Van Meer said.

Gibraltar now conducts background checks for any parent, community member or individual from an outside organization who goes to the school.

“Anytime anyone is working with students directly, I want to make sure that we have a background check on them and we know that they are safe to be working with kids,” Van Meer said.

Sevastopol High School is taking precautions to improve safety and security by implementing an outside main-entrance camera, intercom and entrance bell, as well as a visitor-management system called Raptor.

According to Sevastopol Superintendent Kyle Luedtke, all school visitors will be asked to ring an entrance bell, and upon entering, they will be asked to present a driver’s license or other government-issued ID. Raptor will scan the ID and run it through a national database of registered sex offenders. After the visitor is approved, Raptor will issue a sticker badge, which is to be worn at all times while in the building. These security improvements cost about $5,000.

Luedtke said it’s harder to put a dollar figure on items such as the placement of doors for security purposes and the layout of classrooms, all of which take security into account.

At Southern Door, construction continues on the school’s $6.27 million facilities-renovation project, which will conclude at the beginning of the 2020-21 school year. According to Superintendent Patricia Vickman, almost half of the expenses for the remodel had some component of improving safety and security for students and staff.

Vickman said they’re adding walls and doors in the elementary school that will act as barriers if there’s an emergency, which is in part because of security concerns regarding the current open-concept classroom layout.

Southern Door’s plan will also relocate the high school office. The school aims to control visitor access by creating a secure vestibule that would allow visitors to be buzzed in, then enter the office prior to gaining access to the building. Security doors are being added in the elementary school as well.

In Sturgeon Bay, the internal entrance and procedures at Sunset, Sawyer and Sunrise Elementary Schools, as well as at T.J. Walker Middle School, have all been modified.

“In addition to needing to be buzzed in to the building through the exterior doors as in the past, visitors at these schools then had to receive an additional clearance … to access the hallway through a special vestibule or the main office, depending on the building’s construction and what our people were able to work with,” Superintendent Dan Tjernagel said.

All of these safety enhancements come after nationwide calls for security improvements in response to shootings at schools. According to the Foundation for Economic Education, school security is a growing, $3 billion industry, and it shows no signs of slowing down.

But the cost of security enhancements isn’t limited to physical structures. In 2019, the Door County Board of Supervisors approved the addition of three school resource officers at Gibraltar, Sevastopol and Southern Door schools. Emergency services, police and schools all now participate in active-shooter drills and training as well.

A rash of incidents and threats aimed at Wisconsin schools – including in Door County – occurred following the Dec. 2 shooting at Waukesha High School. A 17-year-old student at Sturgeon Bay High School was taken into police custody after posting a threatening message on social media, and in May, the Door County Sheriff’s Office and the Southern Door County School District investigated a hit-list threat made toward the school.

Similar incidents occurred at Gibraltar and Sevastopol High Schools two years ago when students at each school made online threats of gun violence. Both schools were locked down, but classes remained in session.

Despite measures to improve safety and security, some teachers, parents and community members remain fearful.

“I feel that generally we have a pretty safe school environment, but I can never be 100 percent sure that [my kids and I] are safe. Crazy things happen everyday,” said Gibraltar High School art teacher Emily Salm, who is also the mother of four Gibraltar students.

Schools across the country – even those in the relative safety of Door County – are spending on security upgrades in hopes that they aren’t next.

Solomon Lindenberg is a senior at Gibraltar High School and the editor of the Viking Voice, Gibraltar’s school newspaper. He is a spring-semester intern at the Peninsula Pulse.