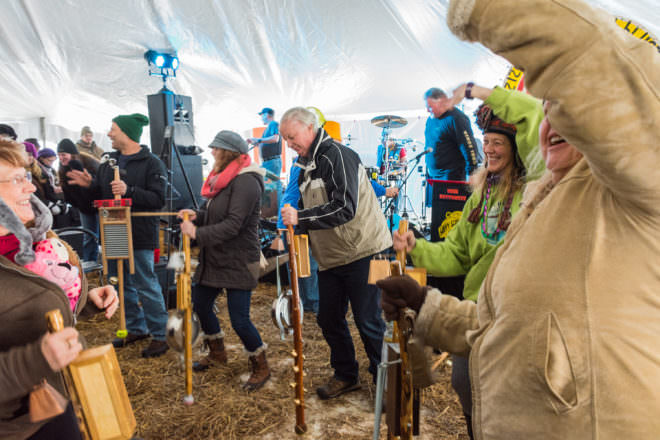 If your snowshoe dance moves are less than desirable and you lack the necessary coaching skills to lead a minnow across a finish line, why not try your hand at another of Fish Creek Winter Festival’s quirky competitions, the Stumpf Fiddle Contest?

This musical contest, in its third year, invites anyone with a pulse and a sense of humor to give their best performance on the stumpf fiddle. Also known as the polka-cello, bumbass, hum strum and devil’s violin, the stumpf fiddle is a hobo-esque percussive instrument consisting of a stick, pie pans, bells and horns held together with nuts and bolts and played with a drumstick. 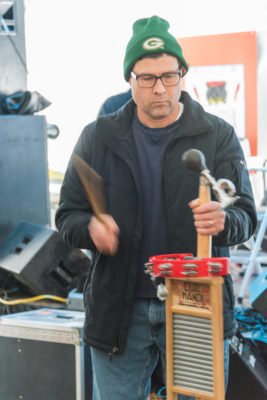 This year’s Stumpf Fiddle Contest emcee is Charlie Eckhardt, shown here demonstrating how to play the instrument during the 2016 festival. Photo by Len Villano.

It is an instrument as elusive in the manufacturing world as it is in music stores and festivals. Winter Fest chair Bob Spielman, who founded the contest in 2015, was introduced to the stumpf fiddle by his old friend, the late Dick Daubner.

“He’d be out at a bar or whatever and he’d pull this thing out and it was just the funniest thing,” Spielman said. “…It’s just a bizarre little thing but you have to be in a good mood and it puts everybody else in a good mood too. He would play this thing and it was just the funniest thing so I got my wife one for Christmas a few years ago and her and her friends actually took lessons from Dick Daubner. I just always had this thing in the back of my head, how bizarre and cool this thing was, and we put a stage in at the Winter Fest tent probably six years ago and we had things like an ugly sweater contest and a number of different events that were alright but they just weren’t that big, splashy, weird thing and so I thought of this. I don’t know anything, I don’t play the thing myself so I started looking around.”

His search led him to the basement of Grandpa’s Stumpf Fiddles in Sussex, Wisconsin, where he met Tom Ruppenthal, AKA “Grandpa Stumpf.” Though Spielman intended to learn how to make a stumpf fiddle from the 80-something Ruppenthal, the old man’s enthusiasm for shopping the internet and garage sales for just the right bells and whistles changed Spielman’s mind.

“He’s like 80 years old and invited us to sit down and have a beer with him while he was showing us how to make these things. It was pretty funny,” Spielman said. “…He has such a ball doing it so I thought, I’m just going to buy them from him. I bought two from him last year then I bought two more this year.”

This year’s competition will be emceed by local musician and music educator Charlie Eckhardt, who invites Winter Fest attendees to take part in one of two stumpf fiddle contests. 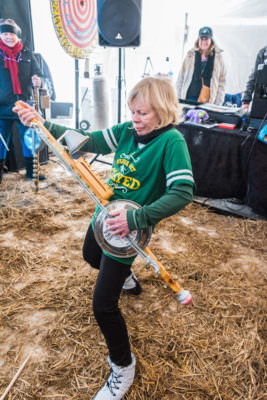 “One is going to be rhythmic prowess so if you’re playing the stumpf fiddle and you’ve got some sick beats worked out to the song and you’re able to do a lot of rhythmic things as you’re playing your stumpf fiddle, we’re going to judge on your accuracy and being able to stay with the beat and your creativity as far as how many different sounds with your particular stumpf fiddle that you put into your performance,” Eckhardt said. “Then the other one is going to be for more interpretation and dance so if you have a costume and you can rock this thing but your rhythm skills aren’t all that good but you can dance with it and do other things, more of a show, then we’re going to judge you on that as well.”

The contests will be backed by techno or polka tracks. Winners of the two contests will walk away with miscellaneous prizes (to be determined) and more importantly, bragging rights for being champions of what Eckhardt and Spielman are pretty sure is the premier winter stumpf fiddle contest in the state.

“It may already be the state’s largest stumpf fiddle contest, I really don’t know,” Spielman said. “And that’s only by default because I think there might only be one.”

This year’s Stumpf Fiddle Contest begins at 2:30pm on Saturday, Feb. 4 at the main tent in Clark Park. For more information, go to VisitFishCreek.com.