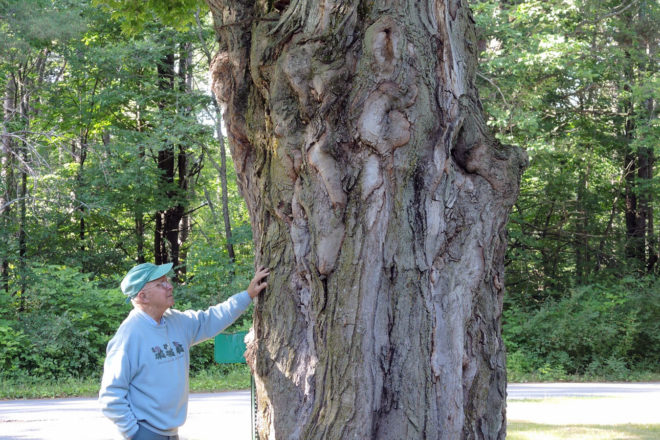 This winter has been warmer than usual, and I learned that good friends had already tapped 180 sugar maple trees by Feb. 29 – a bit earlier than in the past. The best conditions for good sap runs are sunny, warm days with light winds, plus subfreezing nights.

Wisconsinites, along with the people of Vermont and New York, can be proud that the sugar maple is our state tree. This outstanding species is without doubt the best known and most important maple in the United States, if not the world. Many people believe that this tree, native to northeastern America and nowhere else, reigns supreme as the world’s most beautiful broad-leaved tree.

I enjoy an occasional breakfast of homemade multigrain, walnut, buttermilk waffles with pure maple syrup on them. Artificial syrups just can’t duplicate the flavor. Drizzle some pure maple syrup – an organic product that contains some minerals and antioxidants – onto your French toast, waffles or pancakes, and you will taste one of the finest and most healthful forms of sweetener known to humans. It’s also a native product that’s made in many areas of the northeastern part of the country.

Thank the Native Americans for discovering the process of evaporating the sap to obtain the sweetened syrup and sugar. More than 10 million sugar maples will be tapped this spring in our country, mostly in Vermont.

The tree’s hard, smooth-grained wood weighs about 44 pounds per cubic foot and is prized for making fine furniture, floors and musical instruments, including certain parts of high-quality pianos. Many of you bakers likely have a rolling pin made of maple.

As much as we look forward to seeing trees flower and leaf out, we also admire the distinctive character that their winter silhouettes reveal. One favorite is an open-grown sugar maple that has a broader form and lower branching. It still stands alone in a large field north of Valmy, and my late husband, Roy, and I would always slow down to admire it on our way to Sturgeon Bay. Its trunk is relatively short compared to the tall, telephone-pole-like trunks of maples in forests, where one of these hardwoods can attain a height of 35 feet in 20 years.

Moist, well-drained slopes are their best habitat – along with American beech, paper birch and eastern hemlock – and they do not tolerate wet, acidic soils. Prime growing conditions can result in a 120-foot-tall tree with a diameter of five feet. The largest specimen Roy measured in Door County has a 16-and-a-half-foot circumference measured four and a half feet above the ground.

As long as deer populations remain high and out of balance with the carrying capacity of the land, the total number of maples will gradually diminish until the day when they will be rare in northeastern Wisconsin. Deer do not eat small beech trees – only the nuts of the mature trees.

Sugar maples have taken over as the number-one street shade tree in the U.S. because of the large and unfortunate die-off of millions of American elms. Perhaps the maples tend to be more of a small-town tree than a large-city tree because they’re sensitive to air pollution produced by heavy traffic and industry.

Regardless of where you live in this region, find yourself an imposing sugar maple, and watch its development from day to day. Let it be your spring parade marshal: steadfast and strong, yet delicate and delicious – the king of all the broad-leaved trees.