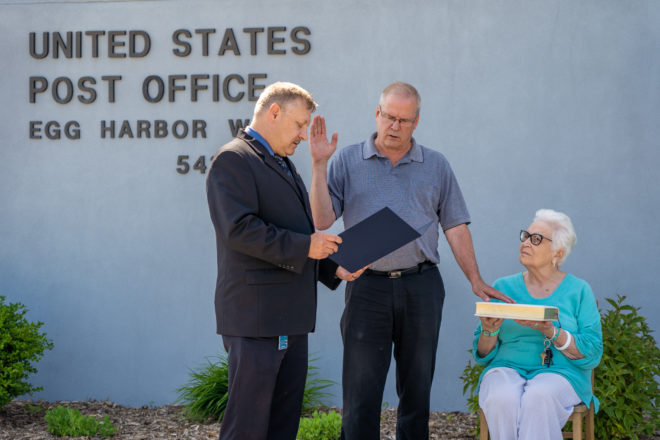 Those with a 54209 zip code have already grown accustomed to seeing Tom Anschutz – with his trademark positive disposition and helpfulness to all comers – behind the counter of the Egg Harbor post office. That’s because he was installed as postmaster on Jan. 15 and has been overseeing the daily operations for months now – rural routes, reporting, inventory, customer service and scheduling.

“Things like that,” he said. “Keeping everybody up here happy.”

Last week, surrounded by family members and many of the postmasters he’s worked for, Anschutz was officially sworn in at the Egg Harbor location by Green Bay postmaster Brad Koenig. The position became available when the previous postmaster, Pam Abts, retired last year.

Anschutz repeatedly referred to his new post as “an honor,” his new career somewhat a surprise. He began as a United States Postal Service (USPS) clerk nearly 10 and a half years ago and soon had keys to all the area offices.

“Whenever they needed help, I was happy to help,” he said.

Anschutz joined the post office in 2012 and was a supervisor at the Sturgeon Bay location immediately prior to his promotion.

Though he’s well known now for his postal role, he was once known as Mr. Advocate, having been the circulation manager for the Door County Advocate for almost 25 years. He worked first for the Woods and then for Gannett when the newspaper giant bought the Woods’ cluster of newspapers.

He did some census work, tended bar and worked as a DJ until finally taking the USPS tests and passing with flying colors. Nobody outside of USPS employees knew more about mail going into the job.

“When I took over in 1996 [at the Door County Advocate], we had 22 publications we were running out of there annually,” Anschutz said. “I redesigned all the routes. When I left, they were down to six publications.”

But that’s all water under the bridge. Anschutz is happy and thriving in his new career, though that could be said about wherever he’s been.