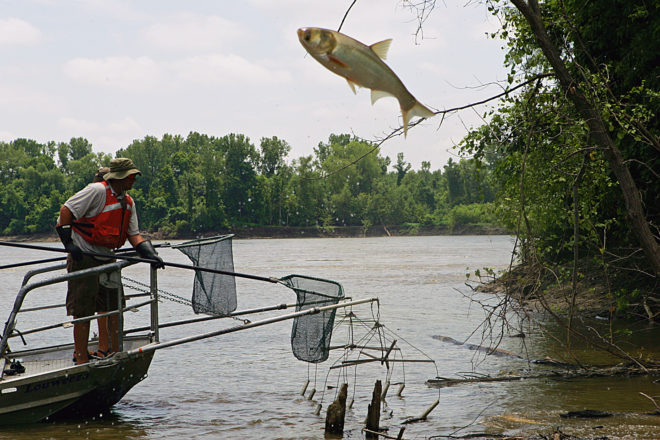 If President Trump and his Administration really want to stop “bad hombres” and illegal immigrants and terrorists from messing up our great country, why would they delay the two-years-in-the-making U.S. Army Corps of Engineer report on preventing the invasion of Asian carp into the Great Lakes?

These Asian carp are the ultimate “bad hombres.” They travel in gangs and have been described as “locusts of the river.” They have been traveling north through rivers since appearing in the lower Mississippi in the 1970s after escaping from aquaculture facilities. They have been on an inexorable drive north, and, so far, have been stopped 55 miles south of Lake Michigan.

Does anyone recall the announcement in late 2013 that during a lakewide testing of Lake Michigan waters for the presence of invasive species, the DNR found a single sample taken from the waters off Potawatomi State Park that tested positive for jumping silver carp, a particularly nasty branch of the invasive Asian carp species.

That news sent chills through anyone who knows about Asian carp and has any kind of stake in Lake Michigan because their presence would forever change the entire Great Lakes. Subsequent testing found no further trace, but it set everyone on edge.

First, all varieties of Asian carp are voracious eaters. Silver carp are the smallest of the species, growing to a mere 3 feet and 60 pounds. And they like to jump in the air. In an interview with an Indiana man in a story I did for another publication a few years back, he talked of boating when the silver carp started jumping – possibly startled by the sound of his motor. Suddenly, one of the carp slammed into him. He said it was like being hit by a fishy bowling ball.

Other members of the Asian carp family include:

The Asian carp eat many of the things native fish eat, but the Asian carp will get there first, eat it all and belch in the native fishes’ faces. As so many people have learned south of the Great Lakes, once Asian carp are established, they quickly become the dominant fish.

The Asian carp’s northern drive has been on everyone’s radar for a long time. I’m guessing I wrote my first story about it a decade ago. And for a time, there seemed to be a sense of urgency about stopping the invasion.

Now, the $7 billion sport fishing market, $16 billion boating industry and $18 billion hunting and wildlife observation market in and around the Great Lakes is threatened by these invasive marauders knocking at the gates, while the White House waffles on promises of getting tough on terrorists, and, make no doubt about it, these Asian carp are terrorists of a piscatory kind.

On March 3, a bipartisan letter was sent to President Trump, signed by 26 members of the U.S. House of Representatives, including Wisconsin’s Sean Duffy, asking him to personally intervene in this issue.

The letter included this paragraph: “There is a consensus that the threat is real, and unfortunately, efforts to solve the problem are now mired in bureaucratic inaction. Further delay only increases the likelihood that this threat becomes a full scale, irreversible inundation of this highly destructive invasive species.”

Delaying the report is a terrible idea, Mr. President. This is where you can show what kind of stuff you are made of. Release the Army Corps of Engineer report so the invasion can be stopped. You wouldn’t want to go down in history as the man who opened the gates to the great Asian carp invasion of the Great Lakes, would you?