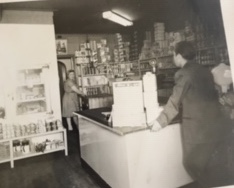 Emily Malcore in her Brussels store.

During the late 1920s, Minnie and Herman Tess had a grocery store at 86 W. Maple St. on Sturgeon Bay’s west side, and they lived on the second floor with their daughter, Linda. The business was later owned by Cyril (Cy) and Emily Malcore, who had previously owned a meat market in Brussels that they sold to Willard and Beatrice Marchant (the beginning of Marchant’s Foods).

Eventually they sold the Maple Street store to Hilbert and Agnes Lodl, and Kathy Lodl Wickmann still has the handwritten land contract that her parents signed May 2, 1951.

Hilbert Lodl came from a grocery family in Denmark, Wisconsin, and he had worked as a meat cutter at Warner’s Grocery on Madison Street before buying his own store. Within a block or so, there was lots of competition: Lensmeyer’s Super Market was at the present location of the Bridgeport Resort; Trodahl’s IGA was on the corner of Madison and Maple; Warner’s Grocery was a block up at 49 S. Madison; and Hobart’s Superette was on Maple across from Corpus Christi.

Wickmann was a year old when her family moved into the apartment above the store. Brothers Chuck and Tom were older, and siblings Ann and John came along later. She remembers the three-bedroom apartment as being very nice.

“There was just one bathroom for the seven of us,” Wickmann said, “but there was a laundry room, which was a big help to my mom with five kids.

“Chuck, Tom and I used to help candle eggs – holding them up to a light bulb to make sure they hadn’t been fertilized – before we put them in cartons. We also helped stock shelves and do inventory,” Wickmann recalled, “but our favorite job was taking our little wagon full of empty soda and beer bottles to cash in at Levine’s liquor store. We used the money we got for them to buy comic books.”

When Chuck and Tom were older, they made deliveries until Tom got a job with the county. Kathy worked in the store, too, until she was a junior, when Lucille Wagner hired her as a part-time operator at the telephone company. Ann and John were still fairly young when their parents sold the business, but John recalled that he “helped by eating candy and drinking sodas.”

“To be really honest,” Kathy said, “the beauty of living there, when we were old enough, was that we were just two blocks from Otumba Beach, and we spent our days there.”

John recalled that the ships that spent the winter in port divided their orders among all the stores in town when they stocked up to leave in the spring.

“We built personal relationships with the vendors, salesmen and delivery people and were on a first-name basis with all of them,” John said. “Even when I was a little kid, they knew my name. The milkman always gave me a little carton of milk, and the Sure-Made guy gave me a natural-casing weiner.” (Kathy, on the other hand, remembers visits from the Oscar Mayer Wienermobile.)

“Everything was done in person then,” John remembered. “No computers or telephones.” All that experience in friendly relationships was useful to John when he grew up to be a Sturgeon Bay postal carrier.

Joe Knaapen, a longtime delivery person for his dad’s bakery in Sturgeon Bay, recalled that both Trodahl’s and Lodl’s were “such neat, terrific little places to go. We had fun with the bakery, providing service to all the little stores and keeping our business going. Dad and our family of 10 kids worked hard for years and years to make a living. The first delivery truck out every morning had to meet the ferry to Washington Island with baked goods for Mann’s Store.”

Lynette Harris has fond childhood memories of Lodl’s because her best friend lived across the street. “We also went to school with Kathy Lodl,” Harris said, “and sometimes we’d go upstairs to her apartment. I remember how strange it seemed that a family lived over a store.”

Kathy was in college when her dad’s back gave out, and in 1970, he sold the store to Paul and Sandra Kay, who opened a saddlery and shoe store. Tom Savage recalled that the Kays had a mynah bird that greeted all the shoppers. Later the space became Frank Westfall’s video store, and today it’s the Blue Front Cafe.