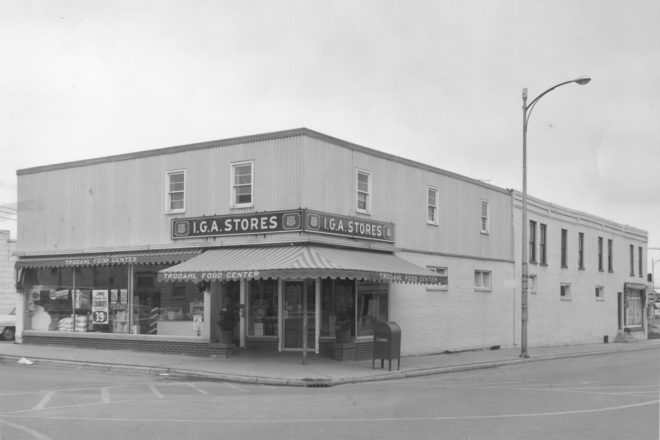 Otis Trodahl remodeled the Hoslett store to become an IGA in 1951. Photo courtesy of the Door County Historical Museum.

‘The busiest grocery store in town’

Anyone born in Sturgeon Bay since 1967 can tell you there’s been a gas station on the northwest corner of Madison and Maple streets for as long as they’ve lived. And they’re right. But for 97 years before that, a grocery story occupied that corner.

The first one was the F.N. Anderson and Company General Store, built in 1884. The business was sold to Anderson’s son-in-law J.J. Hoslett and Herbert Anderson in 1902, and at various times, it also housed – along with Hoslett’s “fancy groceries” – the Sawyer Drug Store, Chester Robertson’s barber shop (later Wiesner’s) and Fred Maples’ clothing store.

In 1917, when he was just 17 years old, Otis Trodahl – a brother of Marvin Trodahl, who owned an IGA grocery store in Egg Harbor from 1939 to 1963 – took over managing the grocery and meat market for the Hosletts.

Otis married Dora Sperber in 1923, and 10 years later, they purchased the business from the Hosletts. In 1951, when the clothing store went out of business, they expanded the grocery store.

Bill Berglund provided early memories of Trodahl’s. In 1941, when he was three, Berglund began riding the bus alone from Manitowoc to Sturgeon Bay to spend the summers with his mother’s sisters, Adeline Austad and Emma Kimber. His uncle, Orville Austad – later Sturgeon Bay’s mayor – was Trodahl’s delivery person, and it was a great adventure for Berglund to ride along with him all over Door County.

Obviously mature for his age, Bill excelled at his first paying job: riding with the milk deliverer in Manitowoc at age four and being rewarded with chocolate milk for running bottles to and from the houses. In 1951, at age 13, he became the riding master at Alpine Resort and spent the summer there, living alone.

Terry Wagner of Sturgeon Bay went to work at Trodahl’s in 1953, when he was just 12. His family had always shopped there, and Wagner needed a job to help his mother after his boat-building father, Albert, died. Wagner earned 25 cents an hour stocking shelves, filling orders and carrying bags for customers until he left for college in Algoma six years later. Otis Trodahl even offered to sell the store to him, but Wagner didn’t have the money at the time.

Like his brother’s store in Egg Harbor, this was an IGA, and every item on the shelves carried the IGA brand.

“IGA delivered once a week,” Wagner said, “and took really good care of us.”

Wagner recalled Otis and Dora Trodahl as “incredible owners who gave away a lot of food and sold to many of the boats that wintered in Sturgeon Bay when they prepared to leave in the spring.” It was, he said, “the busiest grocery store in town.”

Customers sometimes asked why Trodahl’s did not stock liquor, and Otis always told them he would not compete with his neighbors – in this case, a nearby liquor store.

The Trodahls had many good friends at Bayview Lutheran Church and went out to dinner at The Mill at 7 pm every Friday night with Russell and Lucille Austad, who owned Door County Hardware; and Cliff Herlache, president of the Bank of Sturgeon Bay, and his wife, Clara.

Other Trodahl’s employees at the time were Frank Hobart, the head butcher, who later started his own store; Dick Wiesner, the barber’s son, who worked in the meat department during high school and later became an eye doctor; Jake Osmanson; Gene Heimbecher, who was in charge of produce and later owned and was the meat cutter at Ray Lensmeyer’s store, where Bridgeport Resort is now; Muriel Mickelson, Otis’ sister; Lois McAllister; and Milly Larson.

Jeanette Schinkten and her brother, John Taube, bought the business in 1961.

Otis Trodahl died Oct. 3, 1979, after suffering a heart attack at the Door County Historical Museum, where he had served as curator for 17 years. He had also been a director of the Bank of Sturgeon Bay since 1947, a Rotarian and a member of the Sturgeon Bay School Board and the Sturgeon Bay Utilities board of directors.

The lower level of the Door County Historical Museum, 18 N. 4th Ave. in Sturgeon Bay, features a street scene of 14 little shops that might have been seen in a pioneer town in the 1800s. One of them is a replica of Trodahl’s Grocery, including many original items from Otis’ store – the original counter and stools, the scales, salt skids, coffee mill, syrup pump and tobacco-plug cutters. Admission is free, but donations are appreciated. Call 920.743.5809 for reservations during COVID-19 restrictions.